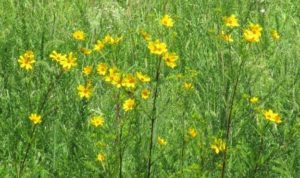 YELLOW FLOWERS IN FIELDS: This time of year, it is common to see a yellow flower of the “Bidens” genus on overgrown farmland. Over the last dozen years, I have seen them begin blooming from about August 20 to August 25. This year, I saw the first blooming August 24, Thursday – in this case in Cranbury, Middlesex County.

IN THE GARDEN, SWEET CORN: I wrapped up the sweet corn harvest, which produced a poor, but usable, crop. The ears developed only partially, basically one half with kernels, one half without. The poor development may be attributable to poor pollination. Corn should be planted in blocks so its pollen can fly back and forth to the plants in the wind. If pollination was the problem, I see two major reasons – one, my corn block was probably too small, in part thanks to a house re-modeling project that fouled up my garden area and by planting a bigger garden this year, I lost area to plant corn in larger blocks and, two, the wet weather may have kept down the spread of pollen. Because I like eating the corn raw off the cob or, if cooked, then sliced off with a knife, the poor development did not affect me in eating what I could harvest. But the quantity of the harvest also was terrible, meaning I had less corn to eat. 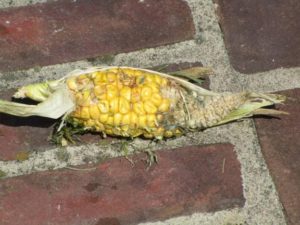 A half-developed ear of corn from the garden.

ELSEWHERE IN THE GARDEN: The early cool-weather harvest was so-so – great pickings of lettuce, carrots having a low yield, and peas bombing out. The jury is still out on the summer crop – I gave up on growing tomato plants from the seeds I planted and bought plants, only to have something eat the tops off of them; as I said, the corn generally bombed; the cucumbers bombed, probably because of too much rain, and I still have hope for mushmelon. My first-time planting of zinnias has saved the summer crop.

This may be the culprit that is eating the plants in my garden – a ground hog, “Marmota monax.” It was photographed in my next-door neighbor’s yard.

Zinnias as a gift for the eye doctor’s office. 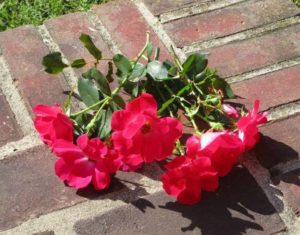 Add some Knock Out roses for the eye doctor’s office. 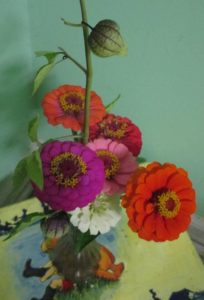 Zinnias, along with tomatillos, for the kitchen table.

ZINNIAS AND BUTTERFLIES: My morning zone-out time, just after getting up, would be watching the birds at the feeder. This summer, however, I gave up the feeder – saving money on top-quality (and costly) feed of corn kernels and putting the birds to work harvesting insects in the yard. So, until cool weather comes and the feeder goes back up, my only meditative exercise was watering the garden. Now, I found something new – watching the butterflies in the zinnia. I have discovered if I just go about my business of walking through the zinnia patch or harvesting zinnia, the butterflies just go about their business. They do not fly off by my intrusion. The butterflies and I have become friends. I am becoming one with the zinnia patch.

I believe the butterfly on the zinnia is a sachem, “Atalopedes campestris.”

DRAGONFLIES AROUND THE YARD: My yard seems to have hosted a lot of dragonflies this summer. Now, I have to learn to identify them. 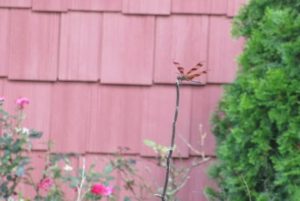 A dragonfly in my backyard. 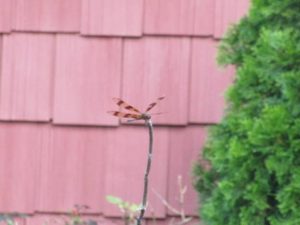 Another view of the dragonfly in my backyard.

KEYPORT HARBOR: On a free-lance writing assignment, I had to go out to the Raritan Bayshore of Monmouth County, so I stopped by Keyport harbor to crank off some photographs. 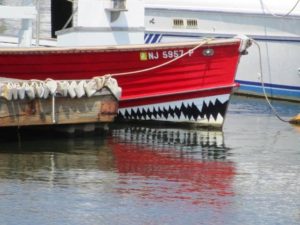 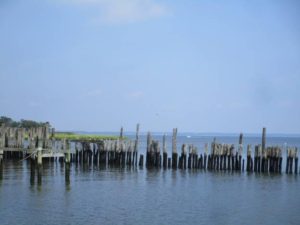 THE ECLIPSE OF THE SUN: My plan was to stay inside during the August 21, Monday, solar eclipse, so as not to be tempted to look at the sun and possibly ruin my eyesight. Well, I was working at my desk during the eclipse, realized I left my camera in my Jeep, and went outside to retrieve it. I grabbed a kitchen strainer and, with my back to the sun, let the sunlight shine through the holes of the strainer onto my back porch. It was pretty cool, watching dozens of shadows of the sun in eclipse. With about 75 percent of the sun covered around 2:45 p.m., sun shadows were obvious, but the sunlight had the soft glow of dusk. Insects remained calling and a butterfly flew by. 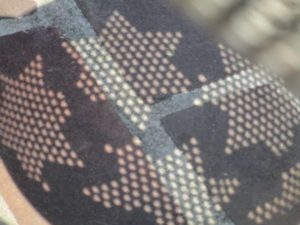 The eclipse through the strainer.

BLUEBIRD SKY: While out in the yard August 24, Thursday, I noticed how clear the sky was – a “bluebird sky.” Jet airplanes could be clearly seen, with that I-almost-can-touch-them look. That means there was little moisture in the air – a dew point of only 52. 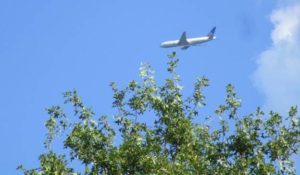 With low moisture in the air, this United Airlines flight, headed to Newark Liberty International Airport from Tel Aviv, Israel, looked very close to my backyard. It was actually flying at an estimated 3,000 feet. 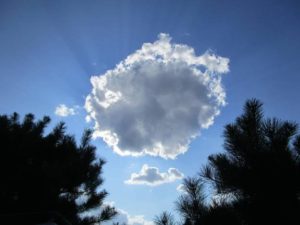 Another view of the “bluebird sky” from my backyard.

DEW POINT: My go-to science guy – Joey Slezak of Helmetta, who has a bachelor’s degree in meteorology and is now working on his master’s in meteorology, both from Rutgers University – tells me dew point, not the humidity reading, is the real gauge of moisture around us and how we feel in it. Here, according to www.fredericksburg.com in Virginia, is how we feel at these dew points — under 55, pleasant; 56 to 60, comfortable; 61 to 65, getting sticky; 66 to 70, uncomfortable; 71 to 75, oppressive; more than 75, miserable.

BOBWHITE QUAIL IN NEW JERSEY: A Philadelphia Inquirer article about restoring BobWhite quail, “Colinus virginianus,” to the Pine Barrens, http://www.philly.com/philly/columnists/kevin_riordan/bringing-back-a-bird-that-once-made-a-signature-sound-of-the-pine-barrens-20170822.html. See Cornell University’s All About Birds website for more on the BobWhite, https://www.allaboutbirds.org/guide/Northern_Bobwhite/id.

CRICKETS IN MY CELLAR: As an only child, I inherited the house I grew up in and which my parents owned for almost four years before I was born in 1956. I never remember crickets in the cellar when I was a kid. But after I took over the house 15 years ago, I noticed a cricket invasion from about August until the fall weather set in. Now, a cricket-chirping cacophony is pleasant, but one or two crickets in the wee hours while one is trying to sleep is AN-NOY-ING – and it turns me from Dr. Naturalist to Mr. Killer, Serial Killer if there is more than one of these little nuisances calling away. But I just had a $38,000 re-modeling of my house, including new siding and insulation. The best $38,000 I could spend on eradicating crickets from the cellar. So far, and it is already late August, only six crickets – none of which are with us anymore. I mean, if a cricket wants to live outside and chirp away, I get it. But if a cricket wants to invade my cellar and rub those little ugly legs together, NO. (OK, OK, OK, now that I feel sort of bad about cricket killing, I will tell you about Revenge of the Crickets. A few years ago, I saw a cricket in the cellar. And I had had it! So, I picked up the pail I used to empty de-humidifier water into and SMASHED the cricket. I poured the de-humidifier water into the bucket — and the water spilled onto the cellar floor. Yes, I had cracked the bucket when I obliterated the cricket. I never learn – whenever I act surly, I pay for it.)

(Sorry, no photo of a dead cricket.)

OCEAN TEMPERATURES: Atlantic Ocean temperatures on the New Jersey coast were in the range of about 74 to 77 degrees.

DOES ANYBODY ELSE…?: …Go to a fast-food restaurant and instead of tossing in the garbage all the paper packaging and so on, take it home for recycling?

Joe Sapia, 60, is a lifelong Monroe resident. He is a Pine Barrens naturalist and an organic vegetable-fruit gardener. He gardens the same backyard plot as did his Italian-American father, Joe Sr., and his Polish-immigrant, maternal grandmother, Annie Poznanski Onda. Both are inspirations for his food gardening. Joe is active with the Rutgers University Master Gardeners/Middlesex County program. He draws inspiration on the Pine Barrens around Helmetta from his mother, Sophie Onda Sapia, who lived her whole life in these Pines, and his Grandma Annie. Joe’s work also is at @JosephSapia on Twitter.com, along with Facebook.com on the Jersey Midlands page. Copyright 2017 by Joseph Sapia