Wetlands (seen in blue, below) are important habitat for amphibian and reptile species as well as other aquatic species. Approximately 50% of the wetlands in the Raritan basin are managed or disturbed, fragmenting important riparian habitat. Wetlands in New Jersey are also considered a prime source of drinking water. 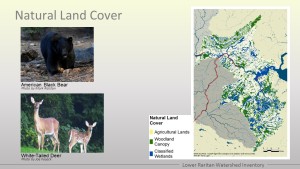 Land classified as forest (map image above, right) does not reliably take into account street trees, parks and other canopy. Nevertheless, the image illustrates the relative scarcity and extreme disconnection of woodland habitat in the Lower Raritan Watershed region. Non-contiguous forest patches and habitat fragmentation are partly responsible for the eradication of historically present megafauna in New Jersey, such as wolves and mountain lions. Meanwhile other megafauna populations of black bear, eastern coyote, and white tailed deer are increasing, partly thanks to their adaptability to human presence. Raccoon, skunk and other small mammals are also increasingly forced to move into urban habitat. Most, if not all of us have had at least one close call with a deer on the road. Bears are universally understood to be dangerous, and even smaller animals can carry rabies or be aggressive. So we’re all familiar with the risks of having large mammals in areas where people are likely to encounter them.

The New Jersey Native Plant Society compiles lists of both native and invasive plant species and where they have been found in the state. Certain species, like the Lady’s Slipper Orchid (found in the LRW’s Helmetta-area outlier of the New Jersey Pinelands), require specific growing conditions and are good indicators of habitat health. Many plant species considered invasive have spread from suburban gardens. Escaped pets can decimate bird populations, or in the case of an anaconda, terrify an entire lake community.

Areas designated as natural heritage priority sites are considered prime or critically important habitat for threatened or endangered plant and animal species. While not a regulatory tool, the designation helps municipalities and land management agencies with the preservation of key areas. For example, the Helmetta site shown in the center of the map is home to rare or endangered riparian and pine barren plant species as well as nesting turtles.

Municipal street trees do contribute to the visual effect of canopy coverage, but do not significantly add to habitat, with the exception of some bird species. The NJ citizen science program mapped bird species diversity within the watershed, and Audubon bird counts have produced similar species diversity and population counts. New Jersey has some of the best birding sites in the nation, including Duke Farms in Somerset County. Some 240 different bird species have been recorded on the Duke Farms site, including several that are rare or endangered.

In a 1978 survey by the Division of Fish and Wildlife, fewer than 10 individual bald eagles were spotted in New Jersey. Though still listed as a federally protected species, by 2008 nesting pairs had reached a high of 69, including a pair at Duke Farms.