Sustainability and ideas of restoration and reuse are integral to the “Watershed Sculpture Project.” The idea behind this project began forming in June 2014, when the New Brunswick-based coLAB Arts joined the LRWP in a series of water quality assessments and monitoring exercises of feeder streams to the Raritan. Many of the streams were garbage strewn and in desperate need of clean-ups. coLAB Arts marveled at the artistic value of the refuse in the streams, suggesting that many of the items might find a new home not in the landfill, but as part of masterwork sculptures, and that bringing attention to the finished sculptures would further generate awareness of pollution issues in our communities. As is often the case with collaborative work, the effort was supported through hundreds of volunteer hours, small cash donations, and in-kind contributions.

The “Watershed Sculpture Project” cultivates an awareness of both the maturing visual arts scene in New Brunswick as well as environmental stewardship focused on the Raritan River and Lower Raritan Watershed. It was conceived as a way to provide opportunities for both local artists and the local environmental community. It’s not every day that artists, especially textile artists, get involved in creating sculptures from trash found in urban streams. By linking coLAB and the LRWP the effort used the arts to communicate an important civic cause and to advance interest in environmental concerns. It was used to recruit “civic science” water quality monitors and volunteers for watershed clean-up efforts, and coLAB leveraged the project to create buzz around upcoming programming. Both parties agreed to establish this as a recurring program. 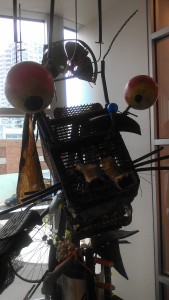 In September 2014 the LRWP coordinated dedicated stream clean-ups for retrieval of items to be given to area sculptors who were commissioned to create pieces for installation at the annual Raritan River Festival. A dozen representatives of the environmental and arts communities worked in two area streams for four hours, removing 18 bags of garbage and filling the back of a truck with items to be used by artists in the sculpture project. The clean-up included decontamination of the found objects.

Five artists were commissioned to work the materials, and five pieces were then installed along the Raritan River in New Brunswick as part of the September 27, 2014 Raritan River Festival. More than 200 visitors stopped by the coLAB and LRWP booths at the Festival. Recognizing the tremendous interest in the project and potential for it to continue to generate conversation regarding environmental pollution and stewardship, coLAB and LRWP partners secured a semi-permanent gallery space for the objects in the New Brunswick Parking Authority offices. The pieces were installed in December 2014, and a Sculpture Project web page developed. A formal wine and cheese gallery opening was held in April 2015, and 22 people attended, with several passers-by stopping for more information.

The project continued in 2015, with the commissioning of four artists and a series of watershed clean-ups that removed a mattress, dozens of bags of garbage, several tires, a stroller, a door and three scooters being pulled from area streams. Works-in-progress were installed at New Brunswick’s PARK(ing) Day and at the Raritan River Festival. A 2015 Sculpture Unveiling Fundraiser, coordinated by the Robert Wood Johnson University Hospital Fitness Center is scheduled for Thursday October 29 from 6-9PM.

Meg Soucy from the LRWP interviewed Watershed Sculpture Project Artist Tamara Knorr by e-mail to find out more about the inspiration behind her work. Read more…

This gallery event was promoted by the organizations through flyers, social media, and on the City of New Brunswick website.

In the past two years this project has generated interest and support from city leaders, activists, media and citizens. The public exposure of the project allows the LRWP to recruit “civic science” water quality monitors and volunteers for watershed clean-up and data collection efforts. coLAB Arts has used this project as a successful example of socially engaged public art that nurtures relationships between artists and community points of inspiration. This project provided the groundwork for the working relationships and inspirational goals for a new placemaking concept for the region, the Rail-Arts-River RARitan Public Art Master Plan.

Rail-Arts-River RARitan is a larger community collaborative effort involving almost a dozen additional partners that organized to submit a grant proposal to the Bloomberg Public Art Challenge. The proposal called Rail-Arts-River gained the attention of the American Architectural Foundation and in June 2015 coLAB, the LRWP and Rutgers Cooperative Extension were invited to Washington DC to workshop ideas for the Rail→Arts→River concept, a proposed two-mile arts walk composed of a connected series of nine zones of intervention between the New Brunswick train station, the Raritan River, residential neighborhoods and the George Street Central Business District. Rail→Arts→River emerged with dual goals: 1) to improve access to the Raritan River and bring attention to the River as a valuable community resource; and 2) to increase the art and opportunities for art that exists in our common open and public spaces. Through the synergy of arts installations and programming focused around a belt of environmental and safety interventions connecting rail and river, our team sought to better define access to public spaces, and to encourage and enhance recreation, environmental engagement and culture and creativity. Read more about the Rail-Arts-River project.