Soil health and infiltration rates are important because of their wide-reaching effects. Soil health affects groundwater, surface runoff (and hence flooding), and vegetative productivity. Unhealthy soil can lead to contaminated groundwater and waterways, a decrease in arable land, a decrease in forests and an increase in flooding risk. There are many factors that affect soil health, infiltration being one of them. Soil can be impacted by organic matter content (animal and plant matter in various stages of decomposition), soil fragments (rock fragments larger than a grain of sand) and amount of impervious surface – like roads, pavements and parking lots, and land use. Previous research has shown that urbanization has a major impact on soil health, and due the fact that the Lower Raritan Watershed is mostly urban land I felt it would be interesting to see how urbanization may have affected the soil.

To research the topic, data was downloaded from the Web Soil Survey, the official source of soil data for the United States. I analyzed these data using ArcGIS, a mapping software, and Microsoft Excel. Data on various chemical, physical and water properties on soil in the Lower Raritan Watershed was downloaded and compared to infiltration rates. As there is no data on infiltration as is; saturated hydraulic conductivity and hydrological soil groups were used as surrogates (this decision was based on the recommendations of professionals in the field). The factors that were researched were organic matter content, percentage of fragments in soil, bulk density (how compact the soil is), surface runoff class (the amount of water flow on land and is not absorbed into the soil), impervious surface cover, and land use. 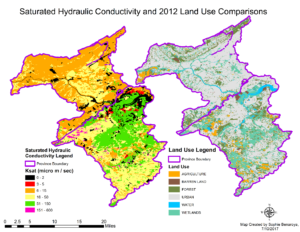 Then I compared hydrological soil groups with soil fragments percentages in the soils (Figure 2, below). Hydrological Soil Groups are groups that soil is placed in based on its surface runoff class, saturated hydraulic conductivity, and infiltrometer data. There are five classes as follows: A – High infiltration, B – Moderate infiltration, C – Slow infiltration, D – Very slow infiltration, and A/D, B/D, C/D – Dual soil groups (first letter represents drained areas, second letter represents un-drained areas.) It is evident from the map that soils with a percentage of fragments of 28% and above generally fall under soil group “D”, further insight into tabular data showed that 58.39% of soil in group D have over 28% fragments. Soil groups A and B had the majority of their soils have 6% or less fragments. 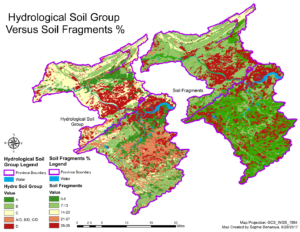 Then I looked at saturated hydraulic conductivity and impervious surface percentage comparisons. 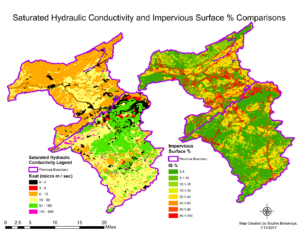 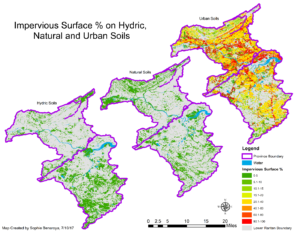 Through my research I found that unfavorable levels of indicators were linked to lower levels of infiltration. The most interesting finding was the effect of land use on soil health. Urban land had lower infiltration rates than forests, wetlands and agricultural areas. In addition, urban lands had low levels of organic matter, high levels of soil fragments and, high levels of impervious surface. The increase in impervious surface is linked to urbanization. Natural and hydric soils in the Lower Raritan Watershed had less than 5% of their soils exhibit impervious surface cover of 5% or more, compared to almost 75% of urban soils. However, not all urban land uses had the same levels. Athletic fields, recreational land and cemeteries had higher levels of infiltration than military or industrial land; possible because they have more vegetation.

Another important finding had to do with forests. Forests and wetlands have high infiltration rates, however in the Piedmont province there is more fragmentation and as such those forests and wetlands typically have lower levels of infiltration than forests and wetlands in the Coastal Plains province. This means that an increase in the fragmentation of forests potentially due to urbanization would be detrimental to soil health, as forests in the Piedmont have an average saturated hydraulic conductivity rate of 18.52, whilst forests in the Coastal Plains province have an average of 53.21.

The main take-aways from my research is that protection of forested areas could help prevent soils from worsening, and an increase in planting in and around current forest areas could help improve the soil of current patches. An increase in green infrastructure could also be beneficial in improving urban soils by increasing the vegetative cover, organic matter and reducing surface runoff.