Article and photos (except where noted) by Joe Mish

Imagine glistening water appearing on the south face of a retreating glacier at the end of the last ice age. The warming atmosphere sent a cascade of water onto the bare earth where it pooled to create an echo chamber, sounding the arrival of each drop of icy water. This scenario describes the theoretical birth of the Raritan River watershed.

The rivers were here first, post glacial retreat. Consider the main branch of the Raritan River, the South Branch, was formed at the start of a brief ten-thousand-year moment of post glacial, relative geologic stability.

The weight of megatons of glacial ice removed, the now unburdened earth began to squirm. Seeking to ease tension and reach a state of equilibrium, mountains, valleys and ridges were formed and reformed as tectonic plates shifted. Low areas filled with glacial melt and rainfall till overflowing. Large lakes formed as water accumulated, the weight of water then destabilized the ground to breech these impoundments. The sudden release of water further altered the topography of the land. Over time equilibrium was reached where water accumulation and flow were balanced. Gravity then directed the relatively constant overflow downhill, seeking a path of least resistance dependent on soil structure and around hard rock to reach sea level. The current source of the Raritan, which arises at Budd Lake, is approximately 933 feet above sea level.

Looking at the stability of today’s river we must appreciate the almost evolutionary natural selection of its watercourse. Locally we see deep valleys far outsized in comparison to the small streams flowing through them; Holland Brook and Pleasant Run are two examples. Somewhere in the past these pastoral rills were raging rivers, perhaps overflow from the volcanic vent that formed Round Valley.

The outlet of the Hudson River was determined at one point to be in the area of Bound Brook and formed what is now the lower Raritan River. The South Branch of the Raritan eventually meandered through rock and rill to merge with the Raritan River, orphaned by the mercurial Hudson in its adolescent stage.

The first rivers and streams were simply situated where the combination of elevation/gravity, rate of flow, soil structure and rocky obstructions were random. Flora and fauna had no stable conditions upon which to flourish.

Once the river course stabilized, it provided ideal conditions for an interdependent community of plants, animals and eventually humans. Undeniably the river is referenced in every aspect of planning and development. Suffering good and bad decisions, its endless flow serves as innate immunity, susceptible to remediation and full recovery.

Human habitation along the river has to be considered dramatic as human intervention has the greatest impact upon the environment in any given era. Whether it be the first colonial dams which were burned because they blocked the upstream alewive migration or twentieth century chemical effluent from industry which poisoned our waters and the cascade of life from which it arose.

The river is an immovable constant which provides stability when change rages in an ebb and flow of perceived progress. This watery touchstone provides a north star upon which to re-direct an awareness of community and balance.

Look closer at the flowing water and realize what appears as an enduring entity is made up of endless stream of new water molecules. A river looks static in that its bed is always filled with water. I just find it fascinating to realize I am looking at the closest thing to infinity, as unique water molecules have passed by the same point for eons. The individuals come together to create a seamless enduring entity.

It is mind boggling to consider that view, but helpful to see life as a continuous flow of new recruits and how decisions made today will impact the future. It also provides a new perspective from which to view an issue. Too often problem solving suffers from restricted contributions.

Our rivers provide tangible benefits as well as being a source of inspiration to expand our imagination and fire our creativity for the benefit of all. The rivers were here first and life grew up around them in an expanding spiral of interrelated communities.

Author Joe Mish has been running wild in New Jersey since childhood when he found ways to escape his mother’s watchful eyes. He continues to trek the swamps, rivers and thickets seeking to share, with the residents and visitors, all of the state’s natural beauty hidden within full view. To read more of his writing and view more of his gorgeous photographs visit Winter Bear Rising, his wordpress blog. Joe’s series “Nature on the Raritan, Hidden in Plain View” runs monthly as part of the LRWP “Voices of the Watershed” series. Writing and photos used with permission from the author. Contact jjmish57@msn.com. See more articles and photos at winterbearrising.wordpress.com.

Check out these pics from June 16, 2016 water quality monitoring in the Englishtown area of the LRW. Waters were bright orange in color with very low pH (3.8):

Upstream was an eroding bank with charcoaled, black wood: 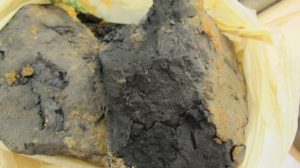 What’s going on here? This is an acid-producing deposit from the Englishtown Geologic Formation. According to Stephanie Murphy, Director of Rutgers Soil Testing lab: “When deposits are buried (not exposed) the mineral is iron sulfide and pH is not “unusual”. It can have black color. When exposed, the extreme acidity results from certain microbes oxidizing the sulfide to sulfate with H+ produced. Same process with acid coal-mining spoils. Acidity makes iron soluble, and when it re-deposits/precipitates, you get the orange hues.”