While the LRWP and other New Jersey non-profits are working hard to clean up our waters and secure clean, safe drinking water for future generations, EPA Administrator Scott Pruitt is working to roll back the Clean Water Act. The current administration is rushing through a repeal of the Clean Water Rule and we have until August 28 during public comment to try and stop it. It’s critical for your voice to be heard in D.C.

What is the Clean Water Rule?

In 2015, the previous administration clarified and finalized protections for streams and wetlands across the country. These safeguards protected the small streams that feed the drinking water sources for nearly 1 in 3 Americans. They protected wetlands throughout the nation that filter pollutants from water, absorb floodwaters, and provide habitat for countless wildlife. In fact, industry and other permittees asked for this clarification as an end to regulatory confusion about which of the country’s waterways the Clean Water Act protects. The rule was supported by millions of Americans.

The Clean Water Rule followed a robust public process. Before finalizing the Clean Water Rule in 2015, EPA held more than 400 meetings with stakeholders across the country and published a synthesis of more than 1,200 peer-reviewed scientific publications, which showed that the small streams and wetlands the Rule safeguards are vital to larger downstream waters.

What is this administration proposing?

Administrator Pruitt does not want to implement the Clean Water Rule. Instead, he plans to rush through the repeal of the Clean Water Rule this year, then propose and finalize a less protective rule in less than a year. President Trump signed an Executive Order instructing the EPA to propose a new rule based on former U.S. Supreme Court Justice Scalia’s opinion of which waterways the Clean Water Act protects. A rule following Scalia’s interpretation would result in drastic exclusions of wetlands and streams from protection; fewer than half of wetlands and fewer than 40 percent of streams would receive federal protection. If that scenario comes to pass, then the nation’s waters will be less protected than they were in 1975!

Who is opposing the Clean Water Rule?

Lobbyists for oil and gas producers, homebuilders, and farm bureaus.

What is at stake?

Our right to clean drinking water is in jeopardy. Rolling back the rule will result in the same regulatory confusion that resulted in broad-based calls for clarity about which of our nation’s waterways the Clean Water Act protects. Rolling back the rule is bad governance, bad for businesses who rely on regulatory certainty, and bad for our communities that deserve clean water.

How you can help

The LRWP has submitted this letter (8.16.17 – LRWP letter to EPA re CWA rules repeal) to Administrator Pruitt. You can help by submitting a request to stop the repeal of this important rule on or before Monday, August 28, 11:59pm EST. Submit your online comment to the Federal eRulemaking Portal to STOP THE REPEAL! Sample language below:

Dear Administrator Pruitt:
The last thing we should do is weaken protections for clean water. I oppose the proposed repeal of the Clean Water Rule. Let the courts do their jobs and review the 2015 rulemaking.

This roll-back is dangerous. Clean water is the backbone of healthy communities and essential to a strong economy. Repealing this commonsense safeguard puts all of that at risk. The proposed repeal will remove Clean Water Act protections for the streams that feed the drinking water sources for more than 1 in 3 Americans. It will endanger 20 million acres of wetlands that provide habitat for wildlife throughout the nation. It could allow the pollution and destruction of the water resources small businesses like craft breweries and outdoor recreation companies rely on. Moreover, property values would be negatively impacted.

Repealing the Clean Water Rule is shortsighted and flies in the face of public opinion. More than 800,000 Americans supported the Clean Water Rule when it was proposed. It is grounded in science and the law. It is an essential tool to help us to get to goal of ensuring all of our waters are swimmable, fishable, and drinkable.

[Include your own thoughtful, compelling comment of how clean water is important to you]

Please stop the repeal process and get back to EPA’s mission – protecting human health and the environment.

Thank you for considering my concerns.

The U.S. Environmental Protection Agency (EPA) just launched its fifth annual Campus RainWorks Challenge, a competition for college and university students to design innovative solutions for our nation’s water infrastructure. Using their campuses as labs, teams develop green infrastructure systems to reduce stormwater pollution and build resilience to climate change. Since 2012, more than 420 student teams have participated in the challenge.

“Stormwater is one of the nation’s most significant water challenges, with increasing amounts of runoff polluting our nation’s streams, rivers and lakes,” said Joel Beauvais, Deputy Assistant Administrator for EPA’s Office of Water. “Through the Campus RainWorks Challenge, EPA invites our country’s future planners, designers, and engineers to apply their classroom learning and help us solve stormwater management problems through innovative green infrastructure design and technology.”

Teams may register for the 2016 Challenge from September 1st to September 30th. The 2016 Challenge winners will be announced in spring 2017. Each first-place team will earn a student prize of $2,000 and a faculty prize of $3,000 to support green infrastructure research or training. Second-place teams will win $1,000 for student teams and $2,000 for faculty research.

We would love to see some of the schools in the Lower Raritan Watershed enter this competition!

More information is available at www.epa.gov/campusrainworks

With support from the EPA Urban Waters Federal Partnership and from New Jersey’s Watershed Institute, from July 26-28 the LRWP joined dozens of other urban waters communities from around the United States and Puerto Rico for the 2016 Urban Waters National Training Workshop in Washington, DC.

The Urban Waters Federal Partnership, now in its 4th year, is an innovative union of 14 federal agencies working to provide integrated support to communities – particularly under-served and economically distressed communities – as they transform their local urban waters into treasured centerpieces for community revitalization. 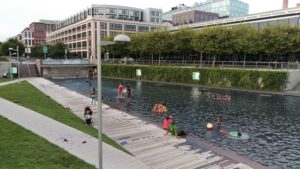 At the Training Workshop communities told stories of how their urban rivers, streams, forests and wetlands are polluted, degraded or inaccessible. But they also highlighted examples of how they are working to measure the relationship between clean, safe and accessible waters environments and improved public health, stronger local economies and lower crime rates.

Mayors talked about making clean water a part of every conversation, and about turning to the water to revive civic life. Volunteer water quality monitors talked about the new perspectives gained by “discovering” regional landscapes through their work. And community organizers showed how process is as important as the final product in terms of sustaining the work to clean up our rivers and streams.

We also had the chance to tour areas like DC’s Anacostia River – a slow-moving diurnal water body dotted with CSOs – to be inspired by how creative landscape design integrates CSO infrastructure, safe river access and play spaces to formerly derelict sites.

As groups from around the country shared how deeper connections to our local water bodies can bring community energy that will lead to healthier urban waters, improved public health, strengthened local businesses, and new jobs it became clear that our work in the Lower Raritan Watershed contributes to an important national movement to clean up our urban rivers, streams and watersheds.