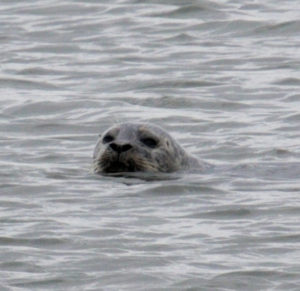 The sea run shad, striped bass and herring that gather at the mouth of the Raritan River attract animals high on the food chain such as this harbor seal. Whales and dolphin have also been sighted over the last few years not in small part from the contribution of the Raritan River and its sweet water branches.

The spring-fed north and south branches of the Raritan River join in a marriage of sweet water at their confluence, on an endless journey to the sea. Each hidden spring and brook along the way, contributes its own genetic identity, mixed in a final blend at the mouth of the Raritan River.

Where the fresh water meets the salty sea, the ebb and flow of tides stir the brine into fresh water to create a stable buffer zone of brackish water.

These back bays and estuaries formed at the mouths of rivers are a perfect place for young of the year striped bass to gain in size before going offshore to migrate. American, hickory, gizzard shad, river herring, such as blueback herring and alewives also gather here and search for ancient breeding grounds located far upriver.

In the time before dams, sea run fish migrated far upstream into the north and south branch. Fishing was a robust industry in early colonial times where the seasonal migration of herring and shad was a profitable business.

The construction of dams to power mills along the river put a halt to upstream commercial fishing. The mills and dams were not welcomed by colonists who made a living from the seasonal fisheries. One account tells of early settlers in the mid 1700s, unhappy with a mill dam just below Bound Brook, making nightly raids to dismantle the dam and allow shad to continue their upstream migration.

Fast forward to today, the river still flows to the sea and the shad and herring gather to swim upstream.

In 1985 pregnant shad from the Delaware River were transplanted to the South Branch as part of a program to restore a shad migration along with planned dam removals.

Dams that have blocked migrating fish have recently been removed. The Calco dam near the former Calco Chemical Company built around 1938, cleared the way for migrating fish to reach the confluence of the Millstone and Raritan where a flood control dam was built. Known as the Island Farm weir, completed in 1995, it includes a viewing window and fish ladder to allow the dam to be bypassed by fish travelling upstream.

As part of the shad restoration project, volunteers working with Rutgers scientists tag shad and herring in an ongoing effort to gauge the success of the fish ladder and restoration efforts. Preliminary findings can be accessed at, http://raritan.rutgers.edu/wp-content/uploads/2015/10/NJDEP-2013-American-shad-restoration-in-the-raritan-river.pdf

A live underwater camera is placed at the dam each year after threat of ice has past. The camera is now operated by Rutgers University and may be seen online at  http://raritanfishcam.weebly.com/fish-guide.html and at http://raritan.rutgers.edu/resources/fish-cam/

Aside from the Calco dam, three of five dams upstream of the Island Farm Weir, two dams on the Raritan, the Nevius street and Robert street dam and one on the Millstone have been removed. All in anticipation that the head dam at Dukes Island Park and the low dam at Rockafellows Mills on the South Branch will eventually be deconstructed.

The dream to restore our rivers and fisheries to their unmolested glory is well on the way to reality. Bald eagles now nest along the Raritan and its branches, soon to be joined by spawning shad and herring.

The vision of a pristine river valley, interrupted by 300 years of abuse and neglect is slowly emerging from the river mist as a magical apparition. The magic supplied by the hard work of Rutgers scientists and dedicated volunteers who echo the words of Rutgers president Thomas, who served in 1930, “Save the Raritan”.

As an aside to this article, I will share a sobering and emotional experience involving the Island Weir Dam that took place in 1995. The intent is to emphasize the importance of safety while paddling in general and especially when near dams or in cold water.

See page three of this link for a description of what happened that day: http://www.wrightwater.com/assets/25-public-safety-at-low-head-dams.pdf

I was paddling on the Delaware and Raritan Canal which parallels the Millstone River about two miles from where the dam is located at the confluence of the Millstone and Raritan rivers. This was a training session for a cold water canoe race that takes place each April in Maine. I am an experienced paddler, familiar with cold water immersion and so was wearing a wet suit with a dry top and pants along with a life jacket/pfd while on the calm water in the canal.

As I neared the end of my trip at the Manville causeway, several police cars slowly drove by and turned around as if searching for something. Sirens were wailing and more police and rescue vehicles were seen and the road blocked off. First thought was the body of a woman who was reported to have ended her life in the Millstone a week before was found.

As it turned out a kayaker and two companions in a canoe decided to run the dam. According to my recollection of the news article; the canoe made it through first, while the kayaker who followed, failed to clear the dam and was stuck in the hydraulic.

According to the news article, ‘the experienced paddlers’ wore no thermal protection or pfds when they ran the dangerous dam. It was reported that the canoers paddled back to help their companion and they capsized in the hydraulic. Once you cross that line which marks the downstream flow from the water cycling upstream, you will be pulled into the hydraulic.

The kayaker and one of the men in the canoe were washed out of the turbulent water but the other was lost, his body never recovered.

A hydraulic occurs when the weight of falling water creates a hole which is then filled by downstream water being pulled upstream in an endless re-circulating current parallel to the dam. Low head dams may be altered to prevent or mitigate a hydraulic. 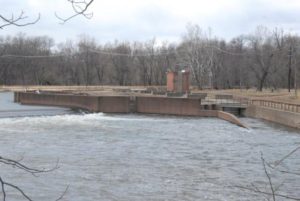 Island Weir Dam at the confluence of the millstone and Raritan River. You can see the horizontal shelves that are the fish ladder in the center and the subsequent stepped redesign to mitigate the dangerous hydraulic.

There have been several more drownings involving dams on the Raritan and its branches. I recall another at the Headgate, which is the dam created by the Duke estate below the confluence of the North and South branches. The paddler went over and was lost in the hydraulic below. 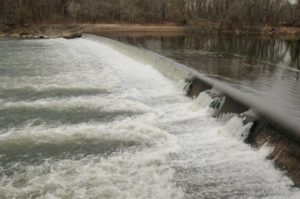 This is the headgate dam at Dukes Island Park. Created to collect river water via the Dukes canal to power the estates and supply water to the series of ponds built at decreasing elevations to allow the water to return to the river by gravity. 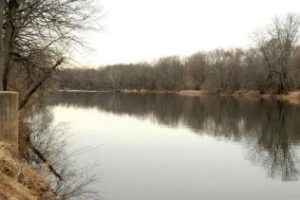 No warning signs are posted to alert paddlers to the danger ahead. On the downstream face of the dam is a warning to keep off. 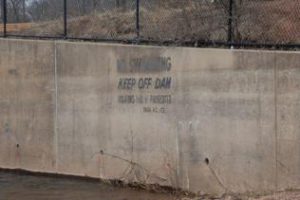 Too little too late warning. 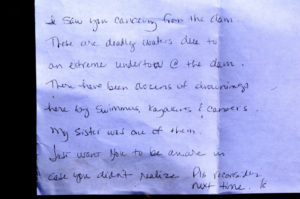 Paddling on the South Branch from Rockafellow’s mill rd, just below the low head dam that forms Red Rock Lake, this note was placed on my windshield. Though I was no where near the dam, contrary to what the note states, the message was at once heart breaking and shown here, now serves as a warning to all; beware of the dangers of low head dams.

This sign is placed about 5 football fields above the dam at red rock lake on the South Branch. It’s placement a puzzlement that mitigates its message. 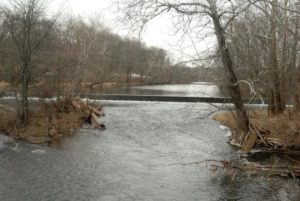 Though rivers like the South Branch and North Branch are reputed to be no more dangerous than a swimming pool, tragedy can strike when least expected. Strainers, trees that fall into the river blocking passage, can snag and capsize a boat and entangle the paddler in its branches under pressure of a fast current. Low head dams can drown a paddler by immersion or entanglement on debris as the paddler is unable to wash out of the turbulent recycling water. Search on line to get an idea of how widespread is the danger of obscure low head dams and loss of life across the country.

Paddling when river temperatures are well below normal body temperature requires thermal protection no matter the air temperature. Wearing a pfd alone will not be enough to survive if your body temperature drops before you can be rescued or self rescue. Such was the case of a paddler on Round Valley reservoir a few years ago.

Typically water temp during the winter and early spring on the South Branch is 41 degrees. More than enough to cause a spasm to block your ability to breathe even before hypothermia sets in. See this link for a detailed explanation of the effects of cold water immersion. Remember, ‘cold water’ does not have to be that cold.

Overturning in fast water, a boat can instantly fill with a hundred gallons of water. Each gallon weighing 8 pounds, can pin or crush a paddler between the canoe and any obstruction. Such was the case on a locally sponsored canoe trip in shallow water on a beautiful day on the South Branch. One paddler was trapped under the canoe in a strainer. Eventually he popped out from under the boat, shaken but safe. The canoe was stuck fast in the strainer, filled with hundreds of pounds of water. Never be downstream of a capsized canoe.

Tragedy can occur on the calmest day under brilliant blue skies, always wear a pfd and be alert to potential dangers, especially dams. 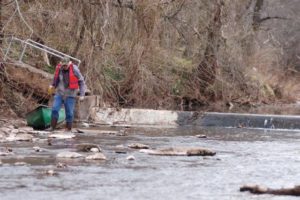 Low head dam across the North Branch just above rt 202 makes a difficult passage during low water portage and a dangerous hydraulic during high water.