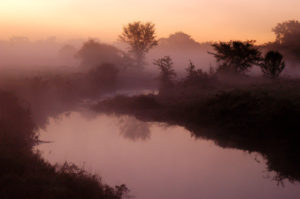 September arrives with the gentleness of the March lamb, whose fleece is tinged with shades of orange, scarlet and yellow. This month is shepherded in by a genial sprite whose name is associated with autumn, even though 21 days out of 30, are owned by summer.

The dominant green of summer foliage and grass is now the canvas upon which colors begin to appear. The classic autumnal portraiture is prompted by the choreographed movement of the planets which direct changes of light and temperature on earth.

September imperceptibly, at first, applies a touch of persimmon to leaves of the black gum tree, found in moist upland areas of the upper Raritan watershed. That shade of orange stands out boldly against the mass of green. Its elongated leaf, larger at the base, tapering to a rounded tip, suggests a festive light, reminiscent of an old fashioned Christmas tree light bulb. 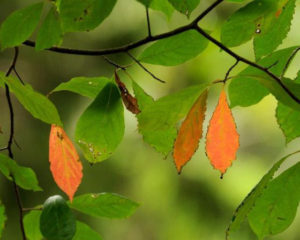 Perhaps using a fine squirrel tail paint brush, and confident from the first strokes of subdued orange, deep scarlet begins to appear on trees as the subtle necklaces of green Virginia creeper vines now glow a brilliant red. The necklace is the first adornment applied, before dressing in the full compliment of matching fall color later in October.

Happy with its brush stokes and color selection, September lingers in the red spectrum to color poison ivy at the base of trees to appear as a ground hugging extension of the soon to be, colorful tree tops. The poison ivy is also used to decorate unsightly stumps and dead limbs close to the ground to clean up the scene with a colorful red and orange cover cloth.

Imbued with the freedom of a bohemian artist, buoyed by success, the compound leaves and fruit of the staghorn sumac, is chosen as a progressively bold, next move. The deepest reds are mixed to produce a flat, dark maroon to saturate the trees large, upright velvety seed cones. Another blend of scarlet and bright red is mixed and applied to the long compound leafs which so easily wave in the slightest summer breeze and glow in the low sunlight when covered with early morning dew.

Taking a step back to view the perspective of its green canvas scattered with specks of color, September wants to jump ahead and fulfill October’s contract and apply full color to the landscape.

The planets and stars, however, have strict rules by which months must abide. Not to be discouraged, September discovered a way to express its soul in full color and still be true to the rules of nature.

While temperature, atmosphere and light invisibly impact the color of leaves, their physical nature allows these invisible conductors to be seen in full color in certain conditions. September would paint the atmosphere using temperature and light as its medium to transfer momentary color, making the entire landscape come alive!

The daily temperature difference that occurs during the summer to autumn seasonal transition produces heavy morning mists along waterways that is showcased in the arena of open meadows and flood plains.

Dawn along the South Branch in September can be very dramatic as the low morning sun shining thru clouds and dust particles produces constantly changing, breathtaking colors in the sky, water and lingering mists. The lighting and colors are so dramatic; the same scene is not recognizable in full daylight.

The ability to dabble in orange and red poison ivy and then produce an ever changing orange sky set upon a purple haze is nothing short of pure magic. Actually, it is all science, for the moment, however, magic best describes a September morning.

September was restrained from applying more color to static objects during its tenure but found a way to make God movie background scenes using the most brilliant colors of visible light, atmosphere and temperature.