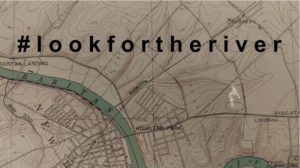 As we travel through our communities, few of us think about the hidden world of streams and rivers that once flowed across the landscape. In the face of climate change and increased precipitation, real life has shown us that stormwater runoff and flooding have intensified. #lookfortheriver is an outreach campaign to engage New Jersey residents in examining changes made to our urban streams and hydrology over time.

Seven years ago my family was without power and heat following Superstorm Sandy. We spent days off from school and work, charging phones in a local fire station, shopping at A&P in the dark, and mopping up our flooded basement apartment. We mourned with our next door neighbor who lost a brother to generator-related carbon monoxide poisoning, and with a colleague who lost a neighbor when the storm’s vicious winds downed a tree.

Today we stop to remember. As we do, we think about those for whom Hurricane-related devastation is fresh. The Bahamas is still assessing damage from Hurricane Dorian. Puerto Rico is still recovering from Hurricane Maria. And just last month Tropical Storm Imelda dumped 43 inches on the Houston, Texas region, causing wide scale flooding, a near repeat of the intense rainfall seen during Hurricane Harvey in 2017.

Imelda and Harvey in particular have brought attention to the likelihood that global climate change will increase the frequency of powerful hurricanes and other storms, and not just in Texas. The northeast has already experienced a 71% increase between 1958 and 2012 in rainfall from intense storms. If the amount of rain that saturated Houston during Harvey or Imelda hit Raritan Bay, our Lower Raritan Watershed riverine communities, including Perth Amboy, South Amboy, Sayreville and South River, would be completely inundated through a combination of storm surge and overland stormwater flow. Although rainfall amounts akin to Harvey are unlikely in our region, we know we must adapt to a wetter, stormier reality.

Intense rainfall is especially devastating in heavily urbanized areas that are characterized by impervious cover, and by streams that are completely culverted, buried, or otherwise covered up. The impact of “hiding” so many of streams causes serious problems. Communities are alienated from their waterways and historic ecologies, habitats are degraded, water quality is compromised, and stormwater runoff and flooding intensify. In the context of intensified precipitation, healthy, open streams play an important role in stormwater management. Open streams slow and control stormwater surge, and stormwater gets absorbed and gradually released by soil and plants.

On this seventh anniversary of Hurricane Sandy the Lower Raritan Watershed Partnership (LRWP) is rolling out #lookfortheriver, a new campaign designed to inspire care for neglected waterways – our lost or forgotten streams – in the context of climate change, intensified urban flooding and sea level rise. We see #lookfortheriver as a way to build social resilience, and to empower communities, particularly folks in harms way with respect to flooding, to value and restore freshwater ecosystems and the environment as community care and resilience.

#lookfortheriver is a way for ordinary citizens to learn how to adapt and prepare for a wetter, stormier future. It involves training in how to read a topographic map, identify watersheds, and understand basic hydrology. It is designed to support residents and communities as they explore their own local landscapes, and to open up discussion about historic patterns of land management and how we might do better.

The LRWP will be gradually building a portfolio of #lookfortheriver offerings. To start, in 2020 eligible entities like libraries, historical societies, museums, civic associations, public agencies, senior centers, and other community groups throughout the state of New Jersey can host a #lookfortheriver outreach session through the New Jersey Council for the Humanities (NJCH) Public Scholars Project.

We are excited about this new initiative, and hope you will join us as we look to the future and #lookfortheriver.