Article and photos by Joseph Sapia 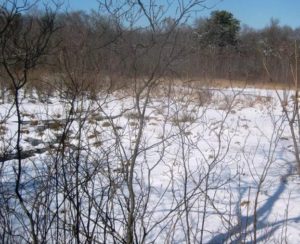 Joey Slezak grew up in South Jersey, but he has multi-generational roots in the Pine Barrens around Helmetta and has lived in his parental grandparents’s former house in Helmetta while studying at Rutgers University in New Brunswick. In his own right, Joey is a meteorology student at Rutgers, an outdoorsman, and, importantly to me in the outdoors, my go-to science guy.

I was looking forward to walking afield with him – perhaps not on as cold a day as February 18, 2015. Minus 1 degree at dawn and 9 degrees when I left my house about two hours later. But between our schedules, we had to take advantage of this opportunity, cold or not. Plus, we are woodsmen from Helmetta of tough local Polish stock. So, we plunged into the approximately 15 degrees when we finally started walking before 10 a.m.

A woodpecker hammered away. A few inches of snow covered the ground – on the surface, it was fluffy — and clung to trees.

“You could see the snow fall from the trees, these little flakes go by,” said Joey, 22-years-old at the time and working on his bachelor’s degree in meteorology.

On this day, we would spend much time in wetlands, including an Atlantic white cedar swamp being threatened by invasive phragmites. 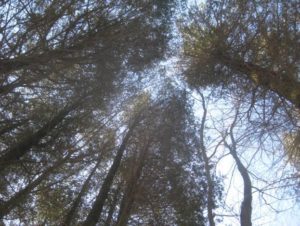 “This is probably as secluded as you could be in these woods,” I said.

It was very quiet, until a jet airplane flew by.

“The final approach to Newark Airport comes over us,” Joey said.

Despite the cold, I was surprisingly warm.

“Once you heat up your clothes, there’s no wind to dissipate it,” Joey said. “(And) you’re dressed for it.”

I was dressed in long underwear, bottoms and tops; covered with a sweater and windbreaker jacket, all made of materials to wick sweat.

Joey pointed out hoar frost, a crystallized coating of frost. With the hoar frost, Mother Nature worked her art on any icy surface of water and on blades of vegetation. 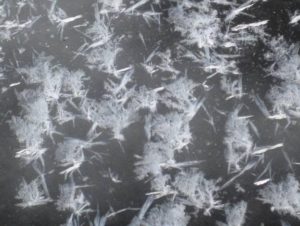 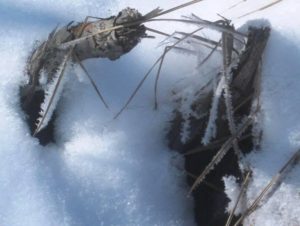 Here and there, we were in danger of breaking through the swamp ice. I went up to my shins at one point, up to my thigh at another. Joey noted how he could smell the swamp when I broke through.

As we walked, we noticed evidence of the day’s low humidity – in the clarity and blueness of the sky.

“Not a cloud in the sky (hardly), a bluebird day,” said Joey, who, now in 2017, is working on his master’s degree in atmospheric science.

As we walked a sand road, we noticed fallen trees, lying northeast to southwest.

“That’s probably coastal,” Joey said, meaning a storm out of the east, rather than in the normal flow of wind from the west. 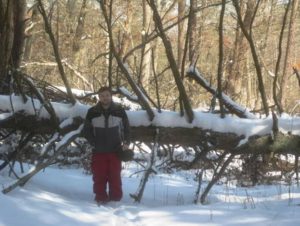 Joey Slezak at a treefall.

Perhaps the highlight of the day was hearing the call – a running-a-finger-along-the-teeth-of-a-comb sound — of a New Jersey chorus frog. This frog is an early caller, breeding as early as February, according to New Jersey Division of Fish and Wildlife literature.

“That sun’s getting warm,” Joey said.

By the time we ended the walk at lunchtime, the temperature was about 30. 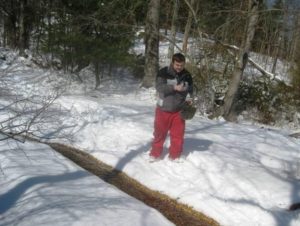 Joey Slezak at a small stream