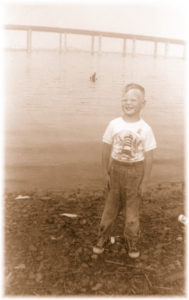 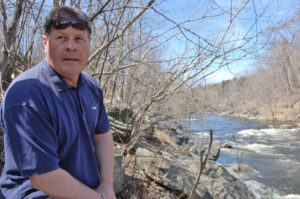 If shadows and footprints were indelible and double exposures across time possible, you might be able to see Henry David Thoreau standing next to Joe on the shore of the Raritan River in New Jersey and the rocky streamside of the Kenduskeag in Maine. Each contemplating the wonder of nature where others might not see anything of value or beauty.

I always lived within sight of where the Raritan flows, the river being a reference point in my life. So embodied in my psyche is the river, that when at the recent 8th Sustainable Raritan River Conference at Rutgers, mention of the words, ‘Raritan River’ by one of the academic speakers felt as if it was me he was talking about. In reality the cumulative agenda was revealing the natural treasures hidden in plain view that I had discovered as a wayward youth and fondled as an adult through a newspaper column and photos.

The Raritan River basin drains about 1,100 square miles of New Jersey. The main Raritan River and bay is the summation of the North and South branches and their tributaries. I hunted ducks and trapped muskrats on the tidal creeks in season and for the rest of the year roamed the area exploring its history, geology, flora and fauna.

My interest in local nature only grew, as the gravitational pull of curiosity generated by this region’s unique natural diversity, drew me deeper into science and fostered an appreciation of its inherent beauty.

Years later I moved up river along the South Branch, fascinated by the thought of the river system as a watery highway. I paddled throughout the year and twice to Raritan Bay.

Eventually the South Branch became a training venue for the Kenduskeag Stream Canoe Race in Bangor Maine. Starting in January each year I would paddle an 11 mile stretch of river several times a week to get in shape for the 16.5 mile canoe race in Maine, which is held in mid April. I ran that race for 20 years, 18 straight years without interruption. Who knew this connection held a significant piece of a puzzle I didn’t know I was putting together.

At some point along the way, when doing research on the Raritan, I came across a history of Perth Amboy, a town located at the mouth of the Raritan River. Its list of astounding historic firsts also included a who’s who of famous visitors; Henry David Thoreau’s name was casually noted. That was very interesting, though just an isolated bit of information.

It was when I began to participate in the Maine canoe race that a coincidence hit me like a lightning bolt. Thoreau’s name came up again, this time linked to the Kenduskeag Stream and Bangor. The lights started to flash, Perth Amboy and Bangor, two river towns prominent in my life.

For those who don’t know, David Henry Thoreau, better known as Henry David Thoreau, or HDT, by his followers, is relevant today for his writings, diaries and environmental awareness. Among his best known works are ‘Walden’, ‘Civil Disobedience’, ‘Walking’ and ‘The Maine Woods’. An abolitionist and anarchist closely associated with Ralph Waldo Emerson, Louisa May Alcott and a lesser known association with Marcus Spring and Eagleswood.

Eagleswood was a utopian society established in Perth Amboy and the focus of Thoreau’s month long visit to New Jersey in October through November 1856. The visit was facilitated by Louisa May Alcott’s father, Bronson Alcott. Thoreau was hired to lecture the Eagleswood society and do a land survey.

I began to research Thoreau, Eagleswood and the Bangor Connection as I seemed to be a kindred spirit of Thoreau, as assessed by some that know me.

If footprints and shadows were indelible, HDT and I would have been physically bumping into each other. I wasn’t following in Henry’s footsteps as much as I was crossing them.

There is a great article by, Wayne Dilts, a New Jersey resident and member of the Thoreau Society who describes Thoreau’s NJ visit. Wayne’s article is found in the Thoreau Reader and titled, “Thoreau’s New Jersey Connection”; http://thoreau.eserver.org/jersey.html

Reviewing other sources for Henry’s actual diary entries for October 25th through mid November 1856 I discovered Thoreau had wandered about 2 miles west of Eagleswood, which placed him directly in the wilds I once roamed.

Thoreau goes on to describe the plants, soil and topography he observed. One entry that really hits home are his words; “I see apparently the sea side goldenrod lingering still by the Raritan River”

This entry stunned me.

Here was a revered philosopher and man of nature, who transcended Walden Pond and Massachusetts to be embraced by the world and relevant for more than a century and a half to the environmental movement, said the magic word, “Raritan River”. This was the first time I experienced what I described earlier at the Sustainable River Conference, an independent discovery of our natural treasures hidden in plain view. My secret world exposed a century and half ago and still viable today.

A further look into the Thoreau, Bangor and Kenduskeag connection, bought more surprises and mingling of footsteps and shadows.

Bangor was at the edge of civilization in Maine and served at the trailhead for Thoreau’s Maine Journey to Mount Katadin via the Penobscot River with his Indian guide, Joe. Thoreau was later to say Joe was one of just a couple of people he most admired.

Thoreau also had cousins in Maine who were friends of the Pratt family. One document I read, and cannot now find as a reference, mentioned Henry and his cousin being invited to dinner at the Pratts.

As it turns out, it was the Pratt family in Bangor who hosted me each April during the Kenduskeag stream canoe race. The connection between the Pratt families in Bangor, then and now, seems to have been lost, but the parallel experiences of two out of state visitors in Bangor are wild coincidence.

“…….the impetus for Thoreau’s interest in Bangor and the northern Maine woods were his cousins Rebecca Jane Billings and Mary Ann Thoreau Billings, and aunt Nancy (Thoreau) Billings, who lived in the Queen City.”

The shore along the lower Kenduskeag, where it empties into the Penobscot River in Bangor, also marks the finish line of the canoe race. Coincidentally there are two mandatory portages around the old flour mill dam and a natural ledge which forces racers to carry their boats along the same path Henry walked.

“During his travails to Bangor, Thoreau often hiked along the Kenduskeag Stream and noted the plant and flower life along its shores.”

Henry’s last word as he died on May 6th 1862 was ‘moose’. Coincidentally my last word as I left Maine, after an unsuccessful month long archery moose hunt, was ‘moose!’, followed closely by the guttural inflection, ‘grr’. I waited more than thirty years to get drawn in the Maine moose lottery and went home with a consolation prize of 15 pounds of moose meat from a sympathetic donor, knowing full well that was my last breath of a chance at a Maine moose.

As I was finally completing this article, which had been simmering for more than two years, a hummingbird, the first one I had seen this season, flew up to the window, where I sat and stared at me for several seconds before flying off. I took that as a sign Henry was nearby and impressed by the coincidence of our footsteps and shadows.