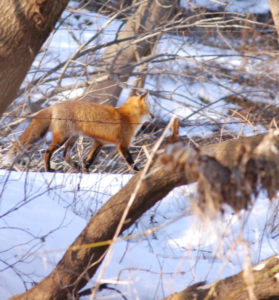 A Red fox fills out a page in its daily diary, handwritten in the fresh snow along the South Branch.

The thirty-one days allotted to January on the calendar is only a suggestion, as far as that month is concerned.

January arrived ahead of schedule this December in a fit of impatience at the slow start of winter. The dull cold and dark days that prefaced winter’s birth seemed to stall the arrival of January and the blistering pace of expanding daylength and razor sharp cold.

As December reflected on the satisfaction of delivering twins, in the form of winter and light, the cold, wind and snow remained idling in the dark, awaiting a new leader. January came to the rescue as it honed the sharpness of the cold to a razor’s edge with forceful arctic wind, in whose draft, daylight was pulled along at an accelerated pace.

The whirlwind that is January never rests as it constantly delivers snow and light wrapped in cold and often spiced with biting wind.

Despite being scheduled for 31 days, January makes the time fly along with everlasting snow and does its best to co-author February weather.

In an attempt to freeze time so it can linger longer than scheduled, January’s frigid breath turns the river’s surface into a crystal lattice of solid ice. Impressive, but not miraculous and arguably unintended.

It is actually possible to watch January at work as it arranges hydrogen and oxygen atoms into a three-dimensional arrangement as it forms ice. A fast-moving cold front dropped the temperature below freezing. The river water was already cooled to 38 degrees and colder in the shallow eddies along the shore. As I fumbled with my camera I noticed ice forming along the edges of one pool. Crystals began to grow from a branch, mid pool, as well as the edges. When I looked again a few minutes later, the ice had expanded several inches. It was like watching a time lapsed movie where time is condensed from hours to seconds. However, this was happening in real time. I was amazed how quickly ice was forming. Crystals grew especially fast from three different areas. Two looked amazingly like feathers, one mimicked a large bird feather while the second looked so much like the cut feather used to fletch an arrow. The third crystal was an exact image of a starburst, where five pointed spikes began to outgrow the shorter but expanding tines. I stared in amazement as the ice images grew before my eyes as if watching an artist at work. The arrow feather magically turned into the body of what I imagined to be a grouse. The other feather grew into the body of some other large bird, the intricacies of each quill carefully detailed. Ice grew from the edges until the sheltered water had been completely sealed with a plate of fine transparent etchings. Though the artist was invisible, evidence of his existence was apparent.

January may seem harsh at times but all life has evolved to cope with its overly enthusiastic nature. As a concession, January snow provides a comment section for life along the river to tell their stories. Even the wind has the opportunity to take a single blade of grass and delicately etch its thoughts into the blank white slate.

A gray fox reveals its path and daily activity, as if written in an open diary, from the moment it left its sheltered nook to the strategy used to capture a tasty vole and the heart of a January love interest. 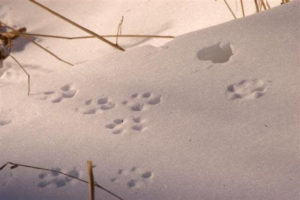 Fox tracks in the new snow with strands of straw colored grass bathed in the contrast of subtle light changes would make a fine Christmas card from the fox. The tracks convey a signed message that translates even to those who aren’t conversant in the language of ‘fox’.

A page purloined from the fox’s diary reveals its thoughts and activity written in the January snow. The fox stopped here atop a snowdrift to scan the area ahead for a meal or a mate, whichever came first.

Loathe to depart, January wills its wintry legacy to February who politely accepts it to bolster the enthusiasm of the fading winter.

December is as far as the year will take us, though fear not, January awaits holding the door to a new year wide open with a welcoming ice cold wind to ensure we enter fully awake and energized. 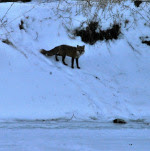 A red fox is a magical creature but even a fox cannot walk on water unless January turns it into a crystal lattice. This fox crosses the river, lured by the siren call of a potential mate.