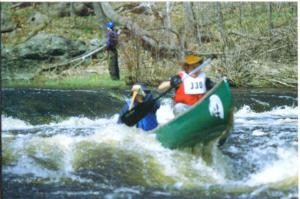 The powerful watery hand of the river reaches up in a wild mood to toss its dance partner skyward.

A canoeist might think of the river as a dance partner whose energy flow and mood sets the tone for the style of dance to be performed. A waltz, a tango or lambada are all on the river’s dance card to be enjoyed or sat out. Any paddler who wishes to partner with the river and enjoy the wide variety of watery tunes must have practiced moves, familiarity with boat and paddle and an ability to read the subtle nuance of wave patterns reflecting the structure of the hidden riverbed.

While high water and low water dances may be thoroughly enjoyed, I originally coined the term ‘river dance’ to describe the convoluted navigation required to follow the low water flow typically occurring on the South Branch during the summer.

Each year, winter ice and downed trees reshape the river bed to form new shoals, islands and channels which leave the scars and wrinkles that figure so prominently when water levels drop in the summer.

Low water and limited paddler skill do not preclude a float trip down the river as a grounded boat may be dragged across exposed shoals and shallows to deeper water.

Plodding along does not equate to river dancing but it gets the job done.

The joy of river dancing comes into play when the paddler, perhaps in a solo canoe, seeks out cuts and channels that hold just enough water to support the boat. Following the deepest water when the riverbed becomes a player in the band may mean tracing a convoluted course from one side of the river to the other. This shallow water navigation strategy is directly applicable to high, fast water flowing through boulder strewn stretches of river. Both situations require reading the wave patterns to determine the best path beyond the next immediate move.

One fast water section where I launch always has sufficient water from bank to bank for about a hundred yards. During lower water levels the left side and most of the middle of the riverbed is almost exposed and not navigable except for a narrow cut quite close to river right. As is often the case, a direct downstream approach to the deep water cut is not possible because the water directly above the cut is too shallow or has a downed tree blocking that approach.  As the situation and solution is obvious from a long distance upstream there is time to gradually approach the passage at a forty-five degree angle and then straighten the boat with a quick draw to follow perfectly in the strong deep current.

Further downstream near a bend in the river, a long treeless island appears, the right side of which is navigable in a channel that runs along the opposite bank. As the channel nears the end of the island, it flattens out and disappears. The water then seeks to run at an angle across the raised center section of the riverbed. The riverbed here appears to have a profile of a typical crowned roadway and the main channel reappears to run just along the tip of the island. Crossing the riverbed from one channel to the other requires a good look at the wave patterns. If you know nothing, then just observe the differences in the wave patterns.  In very shallow water they are almost indistinguishable but with practice differences will become apparent. Generally, flatter waves reflect deeper water. Or simply put, the less busy the surface of the water appears, the further above the riverbed it is. Don’t be surprised sometimes to find the water too shallow despite choosing the most favorable pathway.  Crossing an ultra shallow channel as described, may require the paddler to shift their weight forward to create an absolute neutral balance in the boat to avoid a fore or aft drag. Shifting paddler weight to one side in a typical shallow V-shaped hull will often decrease the depth the hull protrudes into the water and might make the difference between stepping out and dragging the boat or barely floating by with some slight scraping.

One of the most useful skills a paddler can acquire is the ability to ferry. A ferry is a method which allows cross stream travel in swift water with minimal paddler effort.

I usually stop to do a ferry whenever fast water presents itself just because it is so much fun and feels like magic. A ferry is based on the premise that a canoe becomes invisible to the current when perfectly aligned with the water flow. A canoe can be paddled upstream and held in position without any downstream travel when the hull is parallel to the water flow. Eventually when the hull begins to angle across the current the boat will be washed downstream. The speed with which the boat is carried downstream depends on the angle of the boat to the water flow. The greater the hull angle, the greater the surface area the current has to push against. A ferry is possible when the boat is angled into the current and that angle held steady by the paddler. Very fast water requires a shallow angle to be held, the slower the water speed the greater the angle needed to perform a ferry.

Often the current speed changes as you cross the river and the boat’s position must be adjusted appropriately. The magic occurs when you realize the boat, held at the proper angle, begins to cross the current from one side to the other without any downstream travel!

A ferry can be accomplished with the bow upstream or downstream. Simply angle the upstream end of the boat in the direction of the shore you wish to reach. In very fast water you might suddenly find yourself at the precipice of a ledge with no chance of safe passage. Not to worry. Straighten the hull with any and all paddle strokes that might be applicable, hold the boat steady. Choose your angle and be amazed as your boat becomes a magic carpet to drift you above the ledge, perpendicular to the current, and on to a safe passage or convenient eddy.

Do not despair when summer water levels fall and most folks abandon the thought of paddling the local rivers. Armed with patience and agility you might try to dance with the river on her terms.