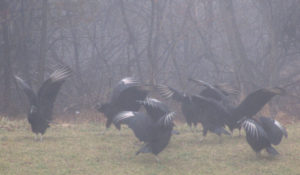 The dance of the black vultures, “Coragyps atratus,” in a professional park in Plainsboro, Middlesex County. These vultures were near a deer carcass, so they could have been spreading their wings to rid them of any bacteria picked up while feeding on the dead body. Or it could be a simple drying of the wings, although the day was foggy.

BLACK VULTURES, UP FROM THE SOUTH:  As I have mentioned in the past, I do not recall seeing a black vulture, “Coragyps atratus,” until about the middle 1990s. They are more of a southeastern United States species. Now, I see them frequently in the Jersey Midlands. The species “has expanded range northward in the northeast, but has declined in parts of southeast,” according to the National Audubon Society’s website. “Loss of good nest sites in large tree hollows may be one cause.”

Black vultures on a foggy day in a professional park in Plainsboro, Middlesex County.

BLACK VULTURES ON A CARCASS:   In a professional park in Plainsboro, Middlesex County, lie a well-picked-over carcass of a deer, “Odocoileus virginianus,” presumably the victim of motor vehicle accident. It was not picked-over enough for black vultures, “Coragyps atratus,” to be uninterested. There were about 10 on or near the carcass. Black vultures feed on “mostly carrion,” according to the National Audubon Society website.  The species “feeds on carcasses of dead animals of all sizes.” And from Cornell University’s All About Birds website, “Turkey vultures (“Cathartes aura”) have an excellent sense of smell, but black vultures aren’t nearly as accomplished sniffers. To find food they soar high in the sky and keep an eye on the lower-soaring turkey vultures. When a turkey vulture’s nose detects the delicious aroma of decaying flesh and descends on a carcass, the black vulture follows close behind. One on one at a carcass, black vultures lose out to the slightly larger turkey vulture. But flocks of black vultures can quickly take over a carcass and drive the more solitary turkey vultures away.” I saw no turkey vultures at the carcass. 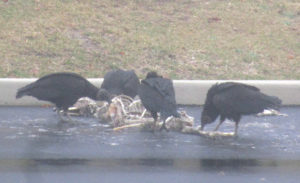 Black vultures on a deer carcass in a professional park in Plainsboro, Middlesex County.

DEER DAMAGE:  Damage from browsing deer, “”Odocoileus virginianus,” is quite apparent, if you know what to look for. Look where ornamentals are planted. If you see arbor vitae with a thin bottom and a tipped top, kind of like an arrow pointed upward, you are probably looking at deer damage — the bottom being what is easily reachable to the deer, the top being harder to reach or out of reach. 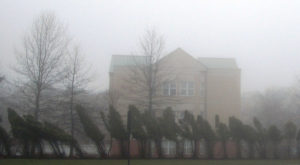 Deer damage on these evergreen ornamental trees on a foggy day in a professional park in Plainsboro, Middlesex County.

MULCHING TREES:  The concept of mulching a tree is to retain water to the root area while the tree is getting established. Well, if you are going to mulch, please do it correctly. That is, think “doughnut,” not “volcano.” Regarding the proper way, build a “doughnut” outside of the trunk — the hole around the trunk, the ring not touching any trunk or roots. Run the rim out to the end of the root ball or to the end of the tree canopy. The mulch should be only 2- to 3-inches deep. (Regarding a volcano, its massive depth could introduce and hold contaminants, while its touching the tree could introduce contaminants to the tree itself. Also, why mulch an established tree? Aesthetics — and property owners love aesthetics. Sorry, but I view that as image over substance. 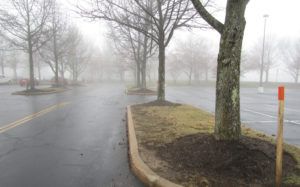 Volcanoes, the wrong way to mulch a tree. Here in a professional park in Plainsboro, Middlesex County.

THE DRIVE-BY NATURALIST:  A doctor’s appointment in this Plainsboro, Middlesex County, professional park got me a lot of material for this writing. So, as I keep reminding, be prepared. There is a lot of nature around us. As much as I preach about keeping an eye out for things happening in the natural world, I missed a rare photograph — a flying adult bald eagle, “Haliaeetus leucocephalus,” and an Air Force jet circling Joint Base McGuire-Dix-Lakehurst. Per my duties as a state Division of Fish and Wildlife volunteer, I was observing the Upper Millstone River eagle nest on the boundary of Mercer and Middlesex counties, including shooting photographs. An adult eagle left the nest and was circling the area, flying farther and farther south from the nest — in the direction of the military base. At the same time, the Air Force cargo plane was circling the base. There they were, two flying symbols of American freedom in one frame. Well, nowadays, I have only a point-and-shoot camera. Instead of focusing on the eagle and plane in the background, the camera focused on the tree branches in the foreground. So, the eagle and plane are a blur. My fault. Despite the capture-the-moment shot, I should have made sure the camera was properly focused. 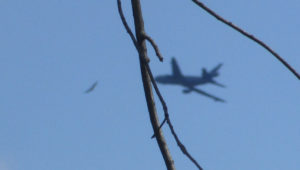 A missed photograph opportunity of two flying symbols of American freedom — a bald eagle circling in front of the Upper Millstone River nest and a plane circling Joint Base McGuire-Dix-Lakehurst.

UPPER MILLSTONE RIVER EAGLES:  The bald eagles, “Haliaeetus leucocephalus,” on the Upper Millstone River nest on the boundary of Mercer and Middlesex counties seem to have been attending to their young for weeks. So, the baby or babies — it is unknown if there is one baby or more in the nest — should fledge in early to mid-May on the early end to early June on the far end. Then, the family should stay together in the area. After fledging, the young eagle or eagles should stay in the area until about early September to early December. (The bald eagle remains in New Jersey an “endangered” breeder – that is, in immediate jeopardy as a breeder – and “threatened” in general – that is, in danger of becoming “endangered” if conditions deteriorate.) 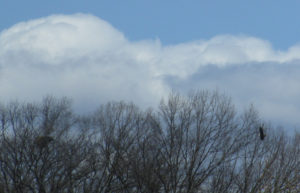 An adult bald eagle flies into the Upper Millstone River nest, left, on the boundary of Mercer and Middlesex counties.

SNOWFALL THIS WEEK:  This week at my house in Monroe, Middlesex County, snow fell Monday, April 2 — and estimated 2 inches. Also on April 2, I noticed the first forsythia blooming this season in Mercer County (Hightstown and East Windsor) and Middlesex County (Cranbury and South Brunswick). 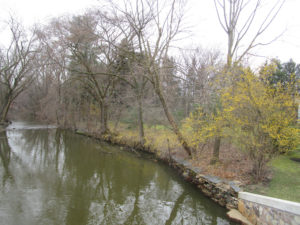 SNOWFALL TO DATE:  With the Monday, April 2, snowfall of about 2 inches at my house in Monroe, Middlesex County, the seasonal snowfall total is 42.5 inches. What a late snow period — prior to March 2, 21.5 inches fell; from March 2 to April 2, 21 inches fell. (The seasonal average at New Brunswick, about 7.5 miles away, is about 26 inches.)

A tranquil Brainerd Lake (informally “Cranbury Lake”) in Cranbury, Middlesex County, on the day it last snowed, Monday, April 2. It was a wet snow of about 2 inches and melted very quickly — before this photograph was taken in the afternoon. 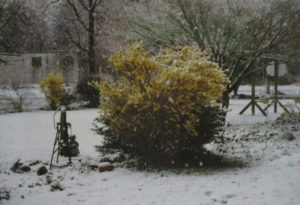 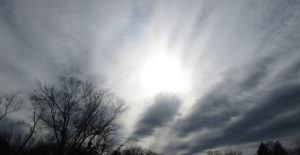 Sky photo, No. 1:  My backyard in Monroe, Middlesex  County.

ATLANTIC OCEAN TEMPERATURE:  The Atlantic Ocean temperature off New Jersey was about 45 degrees. 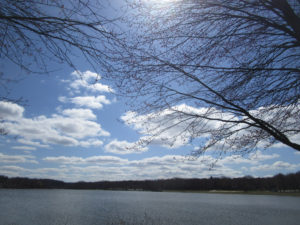 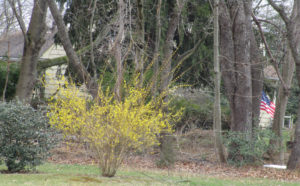 Forsythia blooming in a front yard of a house in East Windsor, Mercer County. 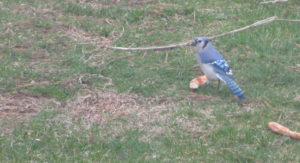 Now, this is a Jersey blue jay, a blue jay, “Cyanocitta cristata,” that eats pizza. In my backyard in Monroe, Middlesex County.