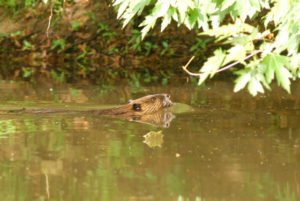 A beaver, whose existence is hidden in plain view, plies the local waters to shatter the belief the area is sanitized of wildlife typically associated with far off wilderness destinations.

As the earth turned its back to the sun on the first evening in January, the rising moon appeared as a thin silver crescent, low on the western horizon.

Just as the moon was high enough to reflect on the mirrored water of the North Branch, its perfect image was disturbed by a series of deep ripples that shattered the image into broken pieces of shimmering light.

The dark night, with minimal light reflected off the moon, made it difficult to see details, though it was clear that the disturbance was made by a beaver. 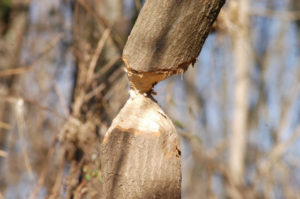 Earlier in the spring I had noticed a small tree cut down, showing unmistakable beaver sign, where a stump is gnawed evenly around, tapering to a perfect point.

For many years, beaver sign along the North and South Branch and Raritan rivers have been commonly seen in the January, February time frame. As the rivers are mostly shallow, the beaver are typically transients heading to the deeper water of the Delaware Raritan Canal or the Millstone to over winter. Many are killed by cars or trapped when they begin to fell trees across the road as was the case in Manville on the D&R canal. 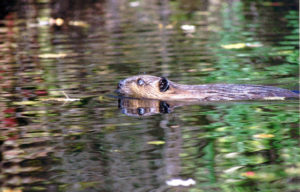 Beaver on the D&R canal built a den and felled trees across the road.

The odd thing about the freshly cut tree I saw, was that it was cut down in April. This was late in the year for a transient beaver. I kept watch all summer and saw no other sign until I noticed wide paths leading from the corn field to the river. The trail was too wide for a muskrat and too muddy for a groundhog. Apparently the beaver was feeding on corn all summer long. No sign of a den was apparent until the fall when the beaver began to cut branches and small trees, piling them at the base of exposed tree roots along a deep section of the river. 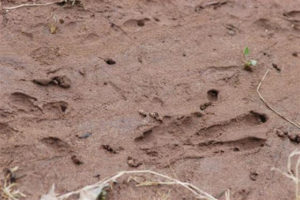 Beaver tracks in the mud along the Raritan River

It was now January, almost 3 months after the corn had been harvested and on this day the corn stubble was dusted with a light snow cover. The thin ice that formed along the banks showed a trail of bubbles made by the beaver as it traveled from its den to stockpile small branches for midwinter dining.

It was interesting to see where muskrats had been under the ice, leaving similar trails of exhaled air bubbles like the beaver, though the beaver left a trail of much larger air bubbles. 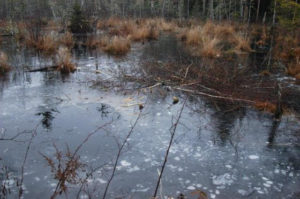 Exhale air from a beaver leaves large bubbles under the ice

Walking along the high bank and mindlessly following a set of fox tracks in the fresh snow, I saw where the beaver came ashore and went a short distance into the empty cornfield. The trail led to a vertical drop down the steep bank, which leveled off and then angled sharply to the right with a quarter turn to the left and directly into the water. It was apparent the beaver slid, rather than climbed back down into the water. A single footprint was evident where it corrected its slippery course. 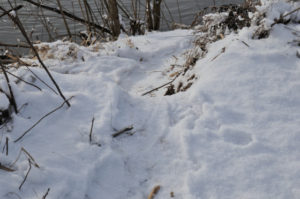 Further downstream across from the den there was an oak about 10 inches in diameter that the beaver had started to gnaw during the fall and abandoned in favor of several smaller trees 2 to 3 inches thick. That oak was now lying on the ground, a testament to the beaver’s determination, powerful jaws and sharp teeth. It will be interesting to see what the beaver will do with this large fallen tree. 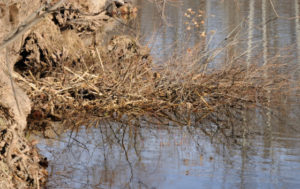 Beginnings of a beaver den or dam.

Beaver have always been associated with the wilderness, their pelts and castor glands served as motivation for French Canadian voyageurs and trappers to open the west after populations were depleted in the east.

To have beaver in our midst is a testimony to the tenacity of wildlife populations long thought erased from existence. It reminds me of Catholic school when the nuns told us to scrunch over in our seats to make room for our guardian angels. In a real sense, beaver are invisible guardian angels of our wild heritage that most people don’t believe exist and never consider.