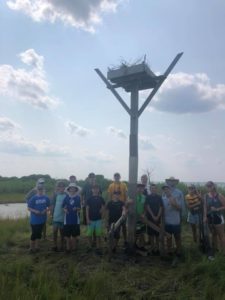 In mid-August I had the opportunity to be part of the Sedge Island Field Experience (SIFE), a program run by the New Jersey Department of Fish and Wildlife. Through SIFE I learned about the ecology and history of the marshes in the Barnegat Bay Area, and to study the area’s wildlife including birds and bugs. At the end of SIFE, campers have an opportunity to present what they have learned throughout the week on topics of their choice. I chose to do a presentation on a threatened species that is found in both the Barnegat Bay area and in the Lower Raritan Watershed, osprey.

Osprey are beautiful and distinctive birds, with brown feathers covering their back and wings and white feathers covering their stomach. Their heads are also a brilliant white, with a dark eye mask (similar to a raccoons). The osprey are also very big birds, with their height being typically 21-24 inches and their wingspan being 4 feet 6 inches-6 feet. Their voice is also distinctive, loud, high pitched and musical, like a cheeep cheep cheep. 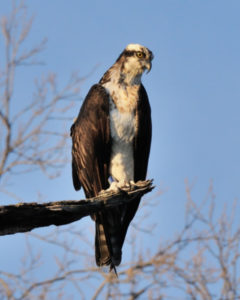 Osprey are not only beautiful birds but they are extremely important to every area they inhabit because they are an indicator species. An indicator species is a species that indicates the level of pollutants in different areas just by where they choose to make their homes. Since indicator species are very pollution sensitive, they won’t choose to live in an area where there is a lot of pollution. In this way they indicate that the level of pollution in the areas they inhabit are fairly clean. Where ospreys choose not to make their homes also indicates the level of pollutants because if there is an area that historically has been the osprey’s home, and osprey are not found there, we know that something is telling the osprey to stay away. Once we know that something is wrong, environmental conservation agencies can then determine the cause and hopefully bring the osprey’s back once the problem is fixed.

Osprey are a migrating species and have a range which spreads across the entire continental United States, the majority of Central and South America and some of Canada. Ospreys make New Jersey their home during their breeding season, which extends from April- August. After breeding season they begin their long trek to Central and South America to countries such as Ecuador and Colombia where they spend their winter.

Unfortunately, ospreys are less common in New Jersey than they used to be prior to the development of their habitat and the inadvertent poisoning of them in the 50’s and 60’s due to the use of the pesticide Dichlorodiphenyltrichloroethane (DDT), used for mosquito control. Though osprey did not consume the pesticide directly, they were poisoned through the process of biomagnification. What this means is that when mosquitoes were treated by DDT, fish then consumed the treated mosquitoes, ingesting DDT themselves. Then when the osprey consumed the fish the concentrated DDT affected them as well. Every time an animal consumed another animal the amount each animal consumed was magnified exponentially. Another effect that DDT had on osprey was that it made their eggshells very brittle and thin so that when the mother osprey went to sit on her eggs, they would break, killing the unborn hatchling.

In 1974 there were only 50 active osprey nests in the state of New Jersey, and that was the point when the New Jersey Department of Fish and Game (now New Jersey Department of Fish and Wildlife), through a program led by Paul D. “Pete ”McClain stepped in. The program brought hatchlings and breeding pairs from Maryland to the Barnegat Bay area to increase the population in New Jersey. The osprey are now protected through State and Federal Laws. They have been taken off the endangered species list and moved to the threatened species list. Forty years ago there were only 50 breeding pairs in New Jersey, but there are now 700 breeding pairs, including many juveniles. Even though the osprey are out of immediate danger, they still need to be protected and their habitats still need to be conserved. Many threats still face the osprey and only 50% of juvenile osprey live to adulthood.

Due to the development of their habitat in the Barnegat Bay area, specifically creation of a canal that removed their roosting lands, the osprey now must live in man-made platforms. Through the SIFE program I had the opportunity to relocate an osprey nest from direct contact with an kayak/canoe trail to a place with more limited human contact. The New Jersey Department of Fish and Wildlife was concerned that the prolonged contact with humans through the osprey nest being on a trail would lead to the abandonment of that nest and thereby decreasing Barnegat Bay’s population of osprey. See the photos below for a visual story of how our group relocated an osprey nest.

The day after we moved the osprey roost, osprey had already moved in, seemingly happy with their relocated home. I was extremely lucky to have the opportunity to help the osprey in such a way, and I recognize that not every can do that, so I encourage everyone to find their own way to help ospreys like making sure that their environment is clean and even donating to organizations who are monitoring and taking care of the osprey. Everyone can help get the osprey off the threatened species list, what are you going to do to help? 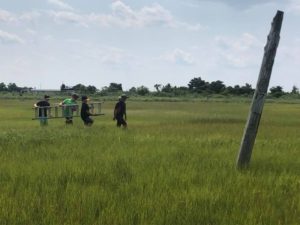 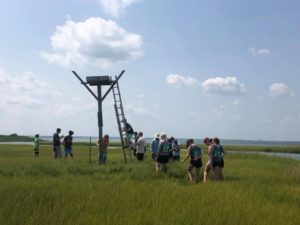 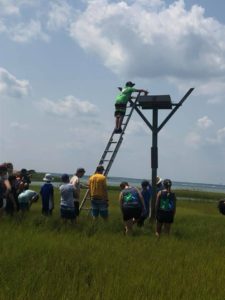 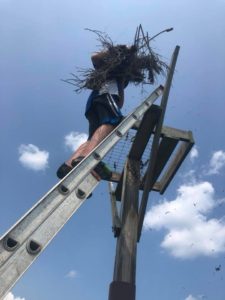