Article by John Jengo. Aerial photos by Alison M. Jones with NoWaterNoLife – photos were captured during a LightHawk, Inc. flight

The 230-foot-wide Headgates Dam, located between Hillsborough and Duke Island Park in Bridgewater, NJ is the last dam on the Raritan River before the confluence of its North and South Branches.

The original Headgates Dam (what you see today is a 1959 reconstruction) was built in 1842 in conjunction with the Raritan Water Power Canal as an entrepreneurial venture in order to sell commercial lots in the town of Raritan three miles east to industries requiring water power.  At its height, there was a gristmill, a machine shop and foundry, a screw factory, a paint works, flour mills, the Somerville Water Company, and most famous of all, the Raritan Woolen Mills, all using water flowing down the Canal.

I believe that the term “Headgates” referred to both the dam itself and a gate structure that was formerly located at the head of the Canal where it adjoined the Raritan River. Many people have noticed the three curious bumps along the eastern half of the dam, and I postulate that these features indicate the location of a stop log guide frame that allowed a set of stop logs (rudimentary gates) to be raised or lowered to control the level of the water impounded behind the dam. Conceivably, these “gates” could be opened during the spring migration to allow migratory fish to pass upriver, and if the gates were operated in this manner, this would not be the only instance of fish passage structures being incorporated into 18th and 19th century dams. One can wonder why such multi-use, holistic thinking was forgotten when all these dams were rebuilt in the 20th century. It should be noted that the term “Headgates” also applied to large Gate House structure equipped with six timber lift gates (which was unfortunately demolished in the 1960s) that was formerly located at the head of the Canal that controlled the flow of water into the Raritan Water Power Canal.

J.B. Duke’s acquisition in 1897 of the Somerset Lighting Company/Raritan Water Power Company (the brick “powerhouse” building which survives just east of the Wrought Iron Bridge Company double intersection truss bridge, commonly referred to as the Nevius Street Bridge,) was initiated because Mr. Duke wanted both hydropower and a reliable water supply from the Canal for his expansive estate (Duke Farms), including its renowned network of lakes and fountains.  To resolve the problem of the turbid Canal waters clogging the delicate fountain waterworks, Mr. Duke had a large-scale filtration facility constructed circa 1907 (the stone “castle” building just west of the Nevius Street Bridge) so that only exceptionally clear water would be discharged from the fountains.  I postulate that Duke Farms ceased using Canal waters around 1974 because the flow of water had diminished, its quality had declined, and the maintenance of the filtration system became too onerous.  It was at this time that Duke Farms converted the Nevius Street Dam (the dam that was located just upstream of the Nevius Street Bridge that was built for aesthetic and recreational purposes by Mr. Duke in 1901) for the estate water supply until 2013 when that dam was removed as part of the Raritan River Fish Passage Initiative and groundwater supply wells were installed to provide water for the Duke Farms lake system.

Since 2008, I have conducted research and studies to assess the feasibility of removing the Headgates Dam, but there are several complex and costly technical issues that remain to be resolved.  Firstly, there is a community-essential sanitary sewer line that is located just upstream of the dam that has to be relocated before the dam is removed (part of the sewer line protrudes above the river bed so if the dam were to be removed, the sewer would be exposed to the rivers’ most turbulent flow, which is not permitted by State regulations).  Secondly, the Raritan Water Power Canal is listed on the New Jersey and National Registers of Historic Places, and in the absence of the dam, it would be largely dewatered so plans are being developed to provide an alternative source of water for the Canal.  Should financial resources be identified to implement these aforementioned remedies, the removal of the Headgates Dam could proceed in a manner similar to that of the Robert Street Dam (removed in 2012), which was reconstructed in 1964 using the same design specifications.  The removal of the Headgates Dam would free the entire 30-mile length of the main stem of the Raritan River for migratory fish passage, in addition to opening up the lower reaches of both the South and North Branches of the Raritan.

John W. Jengo, PG, LSRP is a licensed Professional Geologist in several Northeastern and Southeastern states and a Licensed Site Remediation Professional in New Jersey. John works as a Principal Hydrogeologist in an environmental consulting firm in southeastern Pennsylvania. He has degrees in geology from Rutgers University (1980) and the University of Delaware (1982). Over the last 30 years, he has conducted the characterization and remediation of large, complex contaminated industrial sites throughout New Jersey, Pennsylvania, and Delaware. He played a key role in Natural Resource Damage (NRD) assessments that led to groundbreaking legal settlements to remove numerous low head dams on the Raritan and Millstone Rivers to restore historically significant migratory fish spawning runs. As technical project manager, he planned, permitted, and successfully managed the removal of the Calco Dam, the Robert Street Dam, and the Nevius Street Dam between 2008-2013, and the removal of the Weston Mill Dam on the Millstone River in 2017, along with leading the archaeological investigation of the former Weston Mill in the Borough of Manville and Franklin Township. 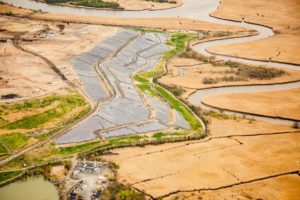 One of many Raritan River-adjacent landfills/Superfund sites at-risk of flood impacts
Photo by Alison M. Jones, No Water No Life – taken during a LightHawk flight, April 2019

On Tuesday May 12, 5:30-6:30 pm join Heather Fenyk with the Lower Raritan Watershed Partnership, Alison M. Jones with No Water No Life, and Joe Mish (aka Winter Bear Rising) author of the LRWP series “Nature on the Raritan, Hidden in Plain View” for a virtual tour of the Raritan Basin.

During this hour long tour Heather, Alison and Joe will share and discuss images taken during a LightHawk flight on April 2019. With many thanks to LightHawk, Inc. for the experience – we look forward to sharing some the experience with you.