Editor’s Note: In 2018 Margo Persin joined the Rutgers Environmental Steward program for training in the important environmental issues affecting New Jersey. Program participants are trained to tackle local environmental problems through a service project. As part of Margo’s service project she chose to conduct assessments of a local stream for a year, and to provide the data she gathered to the Lower Raritan Watershed Partnership (LRWP). Margo keeps a journal of her experiences, excerpts of which are included in the LRWP’s “Voices of the Watershed” column.

Fall has arrived in all of its glory to Ambrose Brook. This visit entailed yet another habitat assessment, one of several that have taken place throughout 2018 under the aegis of my Environmental Stewards program project, and most probably the last for this year-long commitment. For this round of measurements, I was very fortunate to have for company, support and assistance Susan E., another Environmental Steward whose project has been an inspiration and role model of sorts for my own. We arrived at the designated spot on the Ambrose Brook at around 10:30 in the morning. The weather was co-operative: high overcast skies, temperature in the high 40’s, variable light wind. It was so helpful to have Susan to aid in the assessment from logistical and safety points of view as well as the advantage of the team work that it provided.

We immediately set to work by measuring out the required inspection distance, placing our flag markers along the designated route, and deciding who would undertake what task for the actual stream assessment of width, depth and velocity, in addition to visually based water conditions, stream and land use characteristic, and high gradient monitoring. To begin, my stream buddy waited at the bank pen and paper in hand while I lurched into the stream for width measurement, equipped with a handy retractable tape measure. I called out the measurement numbers and she jotted them down on the assessment sheets. So far, so good. The next task was depth measurement, to be taken with a rigid metal ruler at various spots along the flag marked course of the brook. I waded mid-stream along our designated route and quickly discovered to my chagrin that my waterproof boots were approximately two inches too low for the water’s depth …. so aside from our official water temperature of 49 degrees taken with a floating thermometer, my feet measured the water temp and gave out a silent primordial scream as the water rushed into said boots and soaked boots, socks, feet, and pant legs. Arrr-r-r-g-g-g-h-h-hhhhh! But I had thought about such an eventuality and had brought along dry socks, shoes and a towel, which were put to excellent use once our foray was concluded. 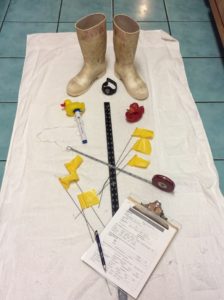 Stream monitoring equipment, including boots too short for the water’s depth midstream

The measurement of velocity proved to be the most interesting to us. At the start of the designated course, Susan dropped in the red plastic duck mid-stream, which began to wend its way downstream toward me according to the force of the flowing water’s current. I used a stopwatch, timed each passage, and called out the numbers. Per the directive on the assessment sheet, we took four readings that varied between less than a minute to slightly over two minutes. However, with the fifth and last release of the duck, we got a surprise. It stopped mid-journey, irrevocably caught in a small whirlpool that was just about invisible at the water’s surface. We were only made aware of this singular current by the round-and-round dance of the red duck mid-stream, and midway between the starting point and presumed ending point. Thus our final measurement for velocity called for a bit of not-so-subtle human intervention in the form of ‘making waves’, in order to encourage the red duck to continue on its journey. The elapsed time for this final reading was four and one half minutes, double the greatest of the previous four. Not only was this a singular event for this round of assessments, but for all the previous ones earlier in the year. No doubt that stream bed conditions created this unexpected duck dance.

As a final contribution to the assessment, we took a seat on one of the park benches and worked our way through the rest of the paperwork. We consulted on each of the necessary readings and were able to arrive at mutually acceptable descriptive categories in regard to water conditions, stream and land use characteristics, and high gradient monitoring. A contribution that enriched our observation was that my stream assessment buddy pointed out an additional pipe outlet, presumably for rain runoff, that I had missed completely in my previous observations. Two heads are better than one.

So this yearly cycle will soon be drawing to a close, given that I began in December of 2017.  I plan to offer some reflections on this journey and offer for contemplation the lesson that have presented themselves to me with the turning of the seasons.  Happy Holidays, everyone.