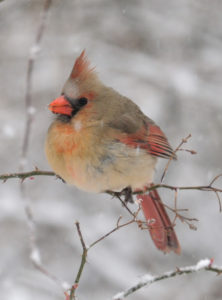 A female cardinal fluffs up her feathers to ward off the cold, as winter wind sweeps the snow covered landscape.

The first breath of winter is felt in the last days of December’s autumn. The frigid wind, intent on erasing the last vestige of fall color, convinces reluctant rusted oak leaves to cleave from their lofty anchorage and sail free. The dry, stiff leaves rattle their objection before finally letting go to add depth to the leafy woodland carpet laid in October’s grand leaf fall.

The branches swept clean of obstruction; darkness deepens as theatre lights fade to heighten the drama of winter’s opening curtain featuring the winter solstice and the birth of light.

The winter solstice describes the time of the year at which the tilt of the earth is such that the sun appears at the lowest point above the horizon. ‘Solstice’, directly translates to, ‘sun stands still’. An impression one gets when the earth’s tilt changes to make the sun appear to halt an instant before it changes direction and ‘rises higher’ on the sky on the first day of winter.

Early observers reasoned the earth was a stable platform and the sun moved from one horizon to the other, above the earth. During the course of the year, the height of the sun was noted each day, measured in some primitive way. Stonehenge comes to mind as one version of tracking periodic celestial events, which led to the concept of time. Days and months were easy events to track and filled in the gap to mark time and define seasons.

That predictability was noted and celebrated as a whisper from the gods, sharing the future forecast of animal migration, weather and plant succession with those who pleased them.

The shortest day of December, which translates to the darkest day of the year, occurs on the last day of autumn. At the instant of the deepest darkness, the wick of the winter candle is lit, glowing like a beacon, getting brighter each day as winter progresses.

Look at a sunrise/sunset chart, cross referencing minutes, hours and days against months, to provide a visual representation of day length over time. Though you may not have noticed the change over a few days, you are now conscious of the minutes of light gained each day. That tangible bit of information acts like bio feedback and goes a long way to physically quell the sadness that the dark winter will never end.

Even if you forgo charting daylight, your body has physiologically evolved to capture trending day length and alters your hormones and mood accordingly. The pineal gland at the base of the brain monitors the day length to mediate release of hormones, primarily melatonin, which affects sleep cycles and behavior.

An odd situation, when you consider that while being consciously unconcerned or oblivious to changes in day length, your pineal gland is hard at work, keeping track.

A candle, glowing in a distant window, giving off a flickering halo of warm amber light, is a perfect tribute to mark the early days of winter and celebrate the birth of light.

This year, winter arrives December 21, at 5.22 pm, so make a conscious effort to mark the time and celebrate the first flicker of light that grows longer each day to make the winter much brighter and improve your mood.

December owns first rights to freezing weather and whimsically decides just which week will host the initiation of winter. The calculated movement of the planets determine the exact moment of the winter solstice right down to the second. Practically, however, winter begins when December decides.