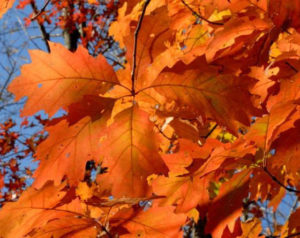 Shades of fluorescent orange, used to color the dawning day, dripped from the palette  of the celestial artist to set the autumn woods on fire. 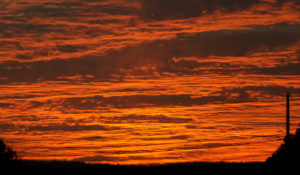 Waves of celestial orange roll over the treetops to set the autumn woods ablaze.

The white, early morning autumn mist hung motionless above the flowing dark water of the South Branch. As dawn approached, the rising sun turned the eastern horizon into a glowing red-hot coal that lit the pale mist with an orange blush.

The trees along the river were immersed in the flood of pre-dawn mist. Some completely hidden and others partially protruding as dark brown silhouettes floating adrift on a misty sea.

As the sun arose, it was as if watching an artist at work laying base colors and adding tints to bring a charcoal sketch to life. The changing light and rising temperature caused the orange mist to vanish as entire trees appeared from the mist, revealing splotches of vibrant fall color.

It is easy to imagine the changing colors of the sunrise were infused into the river mist to wash over the treetops and set their leaves ablaze.

The same spectrum of color seen in the eastern sky at dawn can be found in the fall foliage not flooded by river mist. The full visible spectrum from violet through red and orange, to pink, salmon and yellow are shared as the tree tops meet the sky’s loaded paint brush.

A mere splash of color in early autumn is all that is needed to set the late October woods ablaze. Each living drop of color slowly expands to cover the entire leaf as the season progresses. Its radiance now sets adjoining leaves aglow until the entire woodland canopy is bathed in bright color.

Retreating skyward to a time lapsed satellite view, the expanding colors can actually be seen migrating south. The green foliage appears to be consumed by the advancing flames of the autumnal fire.

Poetic inspiration imagines it is the weight of intense color that causes the leaf to depart the branch.

Gusts of wind stir the treetops to recruit a shower of shimmering color in a free fall final dance for which the tethered leaves had been rehearsing since spring.

The first leaves to fall are contributed by the black walnut and ash trees. Impatient for some reason to drop their leaves. They stand naked among the still well-dressed oak and maple associates just beginning to change color.

A stand of Norway maples grew thick along a low ridge that bordered a sloping cornfield. Their brilliant yellow leaves carpeted the ground and reflected light upward to brighten the understory and set the leaves aglow. The lowest leaves fought for their share of light all season and grew oversized in the effort. The reflected light penetrated the deep shade to illuminate these outsized yellow beacons to celebrity status.

The change of leaf color during autumn has a well-established scientific explanation. Though a longer held belief declared, without question, the color was the work of an ethereal magician.

It is easy to subscribe to that belief when you see a green leaf turn fluorescent orange, a color otherwise unknown in nature. The only place to see that color was in the flames of a fire or in the distant heavens to mark the sun’s arrival and departure.

The fall color is best seen as magic, to set your imagination free and escape to a quiet place where all things are possible.