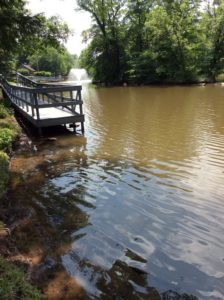 So summer is in full swing – I made a visit to the Ambrose Brook immediately after the summer solstice, on 24 June 2018. The environs have changed in several ways, both passive and active. There are several aerating fountains that spray a cool mist that is distributed by the shifting breezes off the water. The highwater mark on the center island has changed since I last visited, probably because of late spring run-off. But the water has even been higher, as evidenced by the residue on all of the banks, the tree roots that extend into the water, and the low-lying bushes. All are wearing a dusty mud color that gives evidence of water that has since receded. Water flow has significantly strengthened, as is noticeable over the modest waterfall close to Rte. 28. In addition, the rain run-off in the two drains has increased, so that more than a trickle from both of them is observable as it enters the brook after the waterfall. 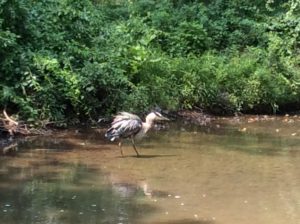 Fauna have increased. One of my prize observations was that of a somewhat lazy or perhaps sleepy but wary blue heron standing on just one leg somewhat in the middle of the stream, past the waterfall. I tried to ease my way in a stealthy and languorous manner along the bank to not call attention to myself, but alas, the heron quickly reacted to my not so subtle approach, was on to me as I slowly worked my way toward the lovely bird . S/he dropped the second leg into the water, turned a cold shoulder in my direction, then deliberately moved away from where I had planted myself on the bank opposite to his/her position. Even though the distance between us stayed about the same, I was so taken by the proximity of this lovely creature and my ability to observe without causing a startled reaction. S/he continued a slow and deliberate saunter down the creek and disappeared around the bend. What a treat to be able to be a silent observer of a stream visitor. Nice! 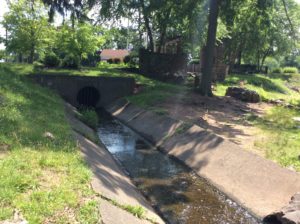 I also noted that the population of Canadian geese has multiplied to a startling extent. And the birds have become so accustomed to human presence that they barely move when a vertical mammal saunters among them, even when they are settled down and roosting on the grass, the available paths or the cement. In order not to encourage their presence, the township has placed signs that pointedly give the command NOT to feed the waterfowl. Obviously, they greatly outnumber any other visitors to this place, either animal or human. And needless to say, mementos and tokens of their presence are all around, some pleasant and others not so much. An addition to the command to not feed the waterfowl would be “Watch your step and be sure to check your shoes before getting in your vehicle.”

Another observation is that butterflies and moths inhabit the environs, with several Monarchs making their graceful presence known as they fluttered past and through my line of vision. Their wingbeats cast a silent beat to the pulse of the planet as they made their way over and through the environs.
Human presence has also increased. It should be noted that the four walkways that run over and parallel to the stream offer an unobstructed view. And all of them are handicap accessible either all or in part. In other words, on all of them ramps are available so that proximity to the stream can be achieved. People who are fishing on the walkways are only part of the traffic. There were several runners, families with tots and strollers, and other quiet observers to finish out the panorama. My next visit in July will be for another stream assessment, boots, thermometer, floating duck, ruler at the ready Happy summer, everyone!