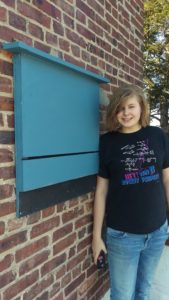 The plight of the Indiana Bat has been on my radar since 2015, when I first researched this species as part of a blog series I wrote about endangered species in the Lower Raritan Watershed. At that time I became aware of several obstacles the bats face, including development of their natural habitats, overcrowding of colonies due to lack of habitat, increased exposure to predators (due to unsubstantial habitat cover) and White Nose Syndrome. This year, as I started my 8th grade service project, I knew I wanted to do something to help the bats. The thing was, I had no idea where to start.

Originally, building a bat box was not even on my mind. I thought I was either going to plant trees that the bats could roost in, or do an outreach campaign to raise awareness on the bat’s plight. It seemed however that it would be difficult to find the exact right place to plant trees, and it would take too long for them to grow. I also felt that general outreach would not make a specific measurable impact. As I continued my research I came across a Youth Service Action article that listed 10 different projects to do to help the environment. Building a bat box was on the list. I thought “Perfect! What’s better to help the bats than to build a safe habitat?”

I downloaded bat box building instructions from the National Wildlife Federation, raised money to fund the project, and reached out to different entities to gain permission to install my bat box on their property. I had three possible sites in mind, two on New Brunswick park land and one on private property – all sites known to have bat activity. The City of New Brunswick never returned my emails or phone calls, but the landlord of an apartment complex gave me permission to install the bat box on the roof of his building.

I had an amazing time completing the project, and I am very glad I built the bat box, because it helps address a very serious local environmental issue. I hope my act of service inspires you to also perform service in your local community.