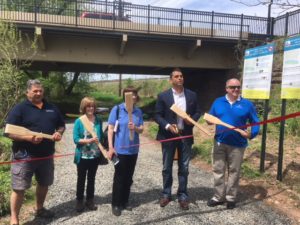 Bound Brook Borough Administrator Hector Herrera and Council President Abel Gomez were joined by representatives of South Bound Brook; Somerset County; New Jersey American Water; Pfizer on behalf of Wyeth Holdings; the Raritan Riverkeeper; National Park Service Rivers, Trails & Conservation Assistance; and members of the public for the ribbon cutting and launch ceremony on a beautiful spring day. Signs explaining how to use the access site with a map of downtown Bound Brook greeted launch users in English and Spanish.

Council President Abel Gomez noted: “This launch site for kayaks and canoes is part of a bigger plan to restore public access to the Raritan River. In 2015, the Borough’s Economic Development Advisory Committee published Riverfront Access Plan for Pedestrians and Bicyclists. This plan puts forth strategy and initiatives for a comprehensive bicycle and pedestrian network to connect downtown commercial areas with the riverfront. The launch site is another element that makes Bound Brook a destination area.”

In addition to the access to the River for paddlers, the Plan calls for the creation of a park along the waterfront from Queens Bridge to Middle Brook, including the development of a riverfront trail system for pedestrians and bicyclists using inactive rail corridor and a levee system. Raritan Riverkeeper Bill Schultz explained that the “launch site will mean that paddlers can now travel all the way from Bound Brook downstream to Perth Amboy and the Raritan Bay, about 18 miles. Raritan River recreation complements the land-based recreation currently available on the south side of the river, as part of the Delaware & Raritan Canal State Park.”

For more information about the project, contact Bound Brook Borough Administrator
Hector Herrera at 732-893-8520 or hherrera@boundbrook-nj.org