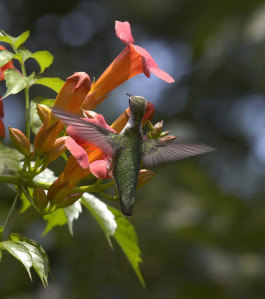 A hummingbird and orange trumpet flower engage in an evolutionary dance of equal partnership that has lasted for eons. The flower not only took advantage of an array of pollinators but also stole the heart of man who would seek to propagate flowers far beyond their natural range and ability to survive.

A name logically follows the existence of an idea, a person, place or a thing and forever provides an instant reference, complete with assigned identifiable characteristics. So before there was a month named May, a segment of time existed in nature where birth and bloom dominated the season.

The mythology from which the name of May arose was based on the same natural observations seen today. Stories of the stars and the gods became the reference points displayed on the night sky overhead projector to help explain observed phenomenon. The poetic phrase, “April showers bring May flowers” provides information sufficient enough for most people to understand the season. Instead of placing flowers at the altar of the goddess Maia we now send flowers to our mothers on a day designated to show her our appreciation, same story, different day.

Going back to the time before May, can you imagine discovering the first flower ever to bloom? In retrospect it would have meant that some plant had evolved to take advantage of a new method of pollination that relied on insects rather than wind. At the time of discovery, however, the moment had to be absolutely magical. Here was something so different in structure, color, scent and profusion that it instantly intensified a fledgling human emotion that speaks to the appreciation of beauty. The flower not only took advantage of insect pollinators but at that moment stole the heart of man who would later seek to propagate flowers far beyond their natural range and ability to survive.

Watching a rambunctious fox pup at a distance, I saw what appeared to be orange pollen on its solid black nose. As the pup was playing around the daylilies I imagined he stuck his nose inside a funnel shaped orange flower, designed for bees and hummingbirds, to come away with the telltale signs of brightly colored pollen grains. If he sniffed a few more flowers he actually became the “bee” and a willing, if not random, participant in asexual reproduction. The part that serendipity plays in nature and science can never be underestimated and its potential never unappreciated when unprecedented success results.

Fox pups are not the only pollinators unknowingly pressed into service by the ingenious evolutionary design of flowers. It is a laugh riot, for some reason, to see a dusting of yellow or orange pollen on the nose of a child or adult who sniffs a flower in pursuit of its scent. Eyes closed, as if about to plant a kiss, the human pollinator presses forward until nose touches stamen.

The entire event, so instinctive and innocently conducted, that the “bee” comes away unaware of its role in the evolutionary drama of species reproduction and survival. A kind friend will of course bring attention to the dusting of pollen left by such an intimate encounter and be trusted to address it discreetly.

Bees of all kind have ‘pollen baskets’ on their back legs which hold an accumulation of pollen grains that appear as large colorful round beads on opposite back legs. Watch one of those big furry yellow and black bees and you can easily see the lumps of colorful pollen that varies from flower to flower.

Paddling along the south branch, wild columbine can now be seen in select places on north and west facing red shale cliffs. These delicate plants grow from roots wedged between the layered red shale well above the surface of the water. The reddish pink tubular flowers with a common yellow center resemble a group of ice cream cones joined to form a common opening which leads to several individual tails. This structure encourages contact with the centrally located pollen that has to be brushed against in order to reach several sources of nectar located in each tail. This flower must have had a hummingbird sitting on the design team who decided not only the flowers structure but the time the flower was set to bloom. Hummers arriving in early spring from Mexico and Central America have a ready source of food to replenish the energy spent in their annual migration north.

Consider the greatest mayflower of all and the part it played in another notable migration. The “Mayflower”, was a ship that sailed to our shores bearing its human pollen to establish new life on the North American continent  The ship, so named by unknown whimsy and intended as a supply barge, grew to evolve much as early flowers did into an effective delivery system directed by nothing more than chance. Like a flower it bloomed, spread its pollen and ‘died back’ soon after returning to England.

May apples, Virginia bluebells, trout lilies, trillium, jack-in-the pulpits and spring beauties are a small sample of local May flowers that represent the spectrum of a floral legacy whose genealogy traces back to the earliest flowers. Consider that flowers are living things that in some magical way recruited man to further their propagation in exchange for a glimpse of eternal beauty, dreams and imagination to expand the universe of human potential with unbounded creativity and expression.