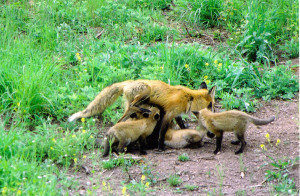 Eager and hungry fox pups survived the mercurial spring floods to feed voraciously on mom in the bright sunlight of a late April morning.

April is the quintessential month of spring, the first month to start with a vowel after a bleak winter of hard consonant constructed months. The name April is probably derived from the Latin infinitive, aperere, ‘to open’, but that consideration is at the risk of offending the claims of the goddess of love, Aphrodite, and Apollo the son of Zeus, their namesake month.

I see April as a grand series of ever changing dance steps performed in tune to the great celestial choreography of the planets and stars. One planetary misstep and the world comes crashing down. It is, however, a play without flaw that brings the predictability of the seasons and the impish April to improvise her set of daily surprises that precede the full bloom of May.

April is a charming minx with dancing green eyes whose mercurial ways give false hope to early gardeners as she whirls in the white robes of a sudden snow squall. Days of bright sunshine are mixed with bone chilling moist air, frosts and gentle rain or hailstorms of biblical proportion. These are the veils April sheds as she improvises dance steps to tease and mislead, all the while faithfully delivering the solemn promise of May.

Edwin Way Teale, a noted author and naturalist claims that, “spring approaches from the south at fifteen miles a day”. If you were to drive from New Jersey to Maine in mid April, you could actually see spring approach.

Travelling north, you go back in time to see spring begin.

As you drive through New Jersey, forsythia planted along road medians would be in full yellow bloom as tree buds give birth to pale green leaves.

The color and blooms slowly fade as you travel north. The further you travel in one day, the more the landscape appears as if drawn on individual sheets of paper flicked by hand to appear as if moving. The individual frames of the ‘movie’ become alive and reveal the living, leading edge of the manifestations of spring.

The return journey south allows you to enjoy the second coming of spring and the insight that comes with a second chance.

Along the South Branch, a Great Horned Owl has been nurturing a clutch of eggs that will produce at least one full sized, flightless owlet to stand constantly alert for parental food deliveries in mid April.

During two trips down the South Branch in February and March, a female red fox ran along the river bank to expose herself as if to draw me away from her riverside den. She would run along the bare vertical bank then walk out onto a gravel bar, sit down and watch me approach. When I got too close she would run off and wait further downstream. At one point she ran across a sand bar that was flanked by a pair of mallards standing on the bare ground and a great blue heron posed in foot deep water. All three birds stood perfectly still as the fox ran between them. Neither the ducks nor the heron made any move to escape as if they knew the fox was not a threat that day.

I can only hope the fox waited until April to have her pups in light of the flood that came in late March. Perhaps April will reveal a gentle rain that favors the survival of not only the fox pups, but the bank swallows, flycatchers, muskrat and turkeys that might have dens or nests close to the riverbank and flood plain.

It is amazing how migration, breeding, births and nurturing coincide with seasonal events as if truly participating in a dance whose every step is critical to survival.

We have evolved physiologically to fit into a small, ‘temporary’ niche circling in an eddy on the river of change. If the changes take place faster than we can evolve, we go away.

Despite the vagaries of April’s whim, she shows the world an emergence of life that has learned her fickle ways and dances in step to lovingly embrace such a wild partner.