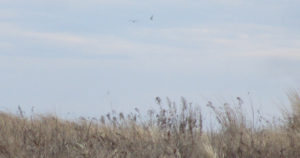 Gulls flying above a dune along the Atlantic Ocean at Spring Lake, Monmouth County. 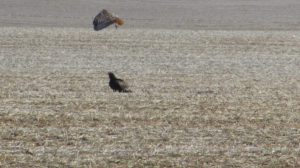 Photo 1:  A turkey vulture, bottom, awaits its turn on a dead animal, to the right of the vulture, as a red-tail hawk got done eating and flies away. Moral of this story:  Do not mess with a red-tail. 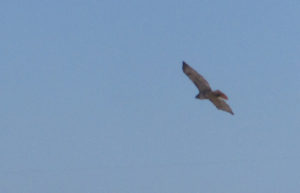 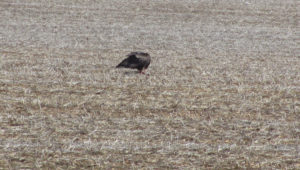 Photo 3:  The turkey vulture gets its turn on the dead animal.

Photo 4:  Another turkey vulture flies in.

HOLLYWOOD AND THE RED-TAILED HAWK:  “The Red-tailed Hawk has a thrilling, raspy scream that sounds exactly like a raptor should sound,” according to Cornell University’s All About Birds website. “At least, that’s what Hollywood directors seem to think. Whenever a hawk or eagle appears onscreen, no matter what species, the shrill cry on the soundtrack is almost always a Red-tailed Hawk.” The site adds, “This is probably the most common hawk in North America. If you’ve got sharp eyes, you’ll see several individuals on almost any long car ride, anywhere.” 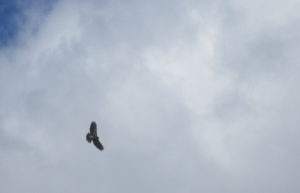 A red-tailed hawk flies over field and farmland on the boundary of Monroe and Cranbury in Middlesex County.

SNOW:  From the snowfall of Tuesday to Thursday, March 20 to 22, the National Weather Service is reporting the following totals by county. They are broken down, here, by the low number of inches to the high number, but they may not reflect complete totals from around each county:
Burlington County: 7.3 inches in Cinnaminson to 11.9 inches in Mount Holly.
Hunterdon County: 6.7 in Wertsville to 14 in the Byram area.
Mercer County: 6 in the Princeton area to 9.1 in the Hightstown area.
Middlesex County: 5 in south Old Bridge to 12.5 at Cheesequake. (I recorded about 11 inches in the part of Monroe between Helmetta and Jamesburg.)
Monmouth County: 8.5 in Keyport to 13 in Lincroft.
Ocean County: 5.8 in the Lakehurst area to 15 in Lacey.
Somerset County: 5.6 in Watchung to 8.5 in the Bedminster area. 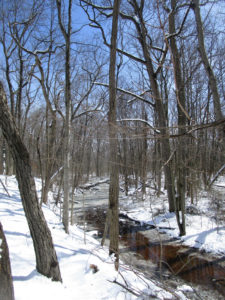 Turtle Creek on the Helmetta-Monroe boundary in Middlesex County after the Tuesday to Thursday, March 20 to 22, snowfall.

SNOWFALL TO DATE:  At my house in Monroe, Middlesex County, the season’s snowfall to date has been 40.5 inches. Normal at New Brunswick, Middlesex County, or about 7.5 miles away, is about 26 inches. We are well past normal, with about three weeks of snow season to go. Interestingly, nearly half the snowfall, or 19 inches, has been in the last three weeks — of March!

Joey’s house in Monroe, Middlesex County, in the snow.

GARDEN WRITING:  The “Garden Writing” course I am teaching in the Princeton Adult School began this week. So, I have spent some time reading student papers, covering such topics as farm life in Delaware, Hunterdon County; orchids; Grandma’s pansies; and a lemon tree. All the papers have been enjoyable reads by area writers. 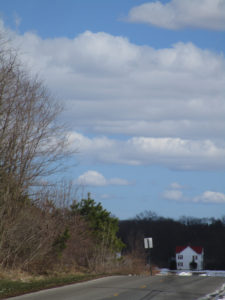 A farm scene in the Applegarth section of Monroe, Middlesex County.

MY GARDEN, NO. 1, PLANTING:  The back portion of my backyard has as far back as I can remember in my 61 years been called “The Garden,” where my father, Joe Sr., and Grandma Annie Poznanski Onda grew vegetables and fruit. I still garden it, that patch being about 15 feet in depth and 75 feet in width, or a little more than 1,100 square feet. Before this week’s snow, I plowed up The Garden. Some look to St. Patrick’s Day, March 17, to plant peas and I had my Burpee Sugar Snap Peas in hand, but I viewed St. Paddy’s Day as too early. Instead, I was looking to plant the peas in early April. Finally, on Saturday, March 24, I broke down and planted two rows, or about 30 feet, of the Burpee Sugar Snap Peas. I also planted a row, or about 15 feet, of Burpee heirloom Touchon Carrot, because I had some old seeds around. 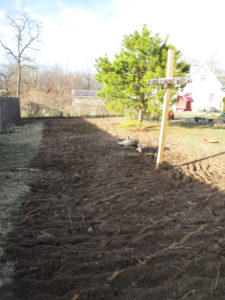 “The Garden” plowed up in my backyard in Monroe, Middlesex County.

MY GARDEN, NO. 3, ZINNIA:  Last year was the first year I grew zinnia. I bought them to attract pollinators, which they did — especially various species of butterfly. And I always had fresh cuts. Zinnia, too, are easy to grow. Also nice about zinnia is it being an annual, so I am not introducing an invasive non-native plant. I fell in love with zinnia. This year, I plan on putting the seeds of various varieties in a jar, shaking the jar, and planting the seeds in a big mix. So far, I plan these Burpee varieties — Envy, Candy Cane Mix, Old Mexico, Forecast, Raspberry Lemonade Mix, Cut and Come Again, Giant Flowered, and Big Tetra. If I need more, I will buy more. If I have too much seed, I will save the extra or take the view, “You cannot have too much zinnia seed.”

ELSEWHERE IN THE YARD:  Ma (Sophie Onda Sapia) died at 81-years-old in 1995. But her flowers still grow in the front yard.

Ma’s flowers in the front yard of my home in Monroe, Middlesex County.

FULL MOON:  The next full moon is Saturday, March 31, the second full moon of March. The first one was March 1. 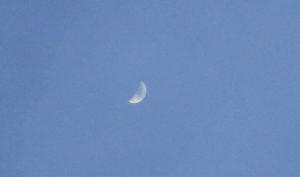 A half-moon with clouds passing in front of it, as viewed from my backyard in Monroe, Middlesex County. 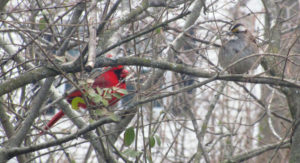 A cardinal, “Cardinalis cardinalis,” and a white-throated sparrow, “Zonotrichia albicollis,” in my sideyard in Monroe, Middlesex County.

ATLANTIC OCEAN TEMPERATURE:  The Atlantic Ocean temperature off New Jersey is about 40 degrees. 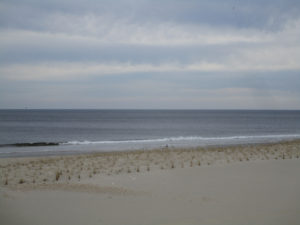 A HAWK?:  Have you ever heard a blue jay cry like a hawk? “The blue jay frequently mimics the calls of hawks, especially the red-shouldered hawk” according to Cornell University’s All About Birds website. “These calls may provide information to other jays that a hawk is around, or may be used to deceive other species into believing a hawk is present.” 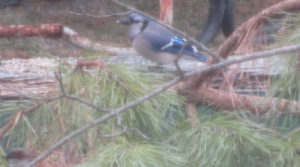 A blue jay, “Cyanocitta cristata,” helping itself to sunflower seeds in the backyard of my Monroe, Middlesex County, home.

SKY PHOTOS:  This week’s sky photographs are from Monroe and Cranbury in Middlesex County. 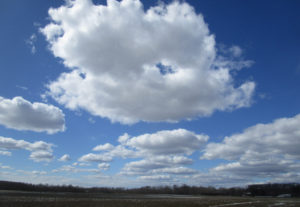 The sky over farmland in Cranbury, Middlesex County. 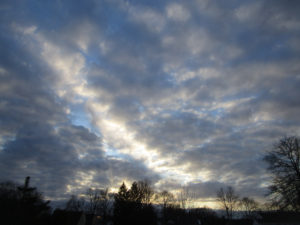 A dusk view from my backyard in Monroe, Middlesex County. 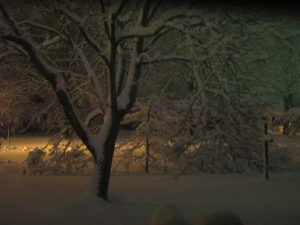 In my front yard in Monroe, Middlesex County, the Wednesday-Thursday, March 21-22, nor’easter ends. This photograph reminds me of “Scout Vespers,” a song we sang at Boy Scout Troop 81 meetings, “Softly falls the light of day as our campfire fades away….”