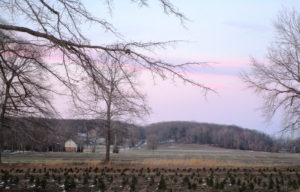 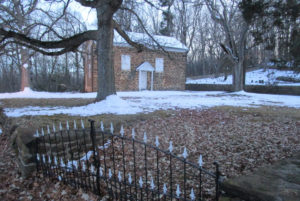 VOICES FROM AFIELD NO. 1, THE CUESTA:  Cousin Jerry Edvy lives on high ground just outside of Perrineville in Millstone, Monmouth County. When it snowed during the Tuesday, March 13, nor’easter, he reported “at least 5 inches.” His house is on the cuesta, or about 280 feet above sea level. When Jerry drove off the cuesta, he saw hardly any snow. “(Route) 33 was clear,” said Jerry, speaking of the road about 3 miles north of his house. “We must have got hit with a band,” he said. Or maybe it was just the height of his area. My house, about 50 feet above sea level about 10 miles to the north, got only about 1 inch of snow. I recall this cuesta-lowland dichotomy several years ago during my newspaper reporting days for the Asbury Park Press as I drove in Monmouth County from the Millstone area to the Sandy Hook area — when I was on high points of the cuesta, there was a covering of snow, maybe a few inches; when I was at lower elevations, maybe just a coating. An interesting phenomena happening in only a matter of dozens of feet.

SNOWFALL:  The seasonal snowfall tally at my house in the part of Monroe between Jamesburg and Helmetta is 29.0 inches. The average seasonal snowfall in New Brunswick, about 7.5 miles away, is about 26 inches. So, based on that, we are about 3 inches more than normal at my house, with about a month’s worth of snowfall season left.

The Tuesday, March 13, nor’easter snowfall at a farm in Plainsboro, Middlesex County.

FOREST FIRE SEASON:  Because of the wet weather, the Pine Barrens spring wildfire season in the Jersey Midlands is running behind this year. Normally, it runs March 15 to May 15, when winds blow, humidity decreases, temperatures rise, and sun penetrates the essentially leafless forest, warming and drying the duff. But with the wetness out there, for example, the state Forest Fire Service canceled a control-burn for the upcoming week in the Jamesburg Park Conservation Area in Middlesex County. 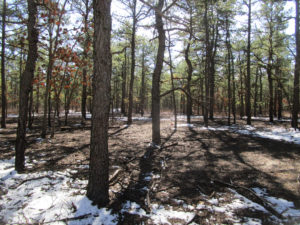 Snow on the ground in the Pine Barrens of Barnegat, Ocean County.

FIRE TOWERS:  The idea of a fire tower is to see smoke during daylight hours, basically to dispatch firefighters before a fire really gets going. Because once flames are seen, the fire is well underway. The state Forest Fire Service has eight wildfire lookout towers in the Jersey Midlands — Apple Pie Hill, Bass River, Batsto, Lebanon, and Medford, all in Burlington County; Cedar Bridge and Lakewood, both in Ocean County; and Jamesburg, Middlesex County. When the fire towers are staffed, the public is welcome to visit. Beware, though, it can be a climb of about 60 to 100 feet, depending on the tower.

BASS RIVER STATE FOREST:  Trees are to be cut around the Bass River fire-lookout tower in Bass River State Forest to improve the view for the tower observer. See https://thesandpaper.villagesoup.com/p/clear-cutting-proposed-for-bass-river-state-forest-fire-protection/1729679.

PYGMY PINES:  Generally in the area of the intersection of Routes 72 and 539 in Ocean County stand hundreds of acres of Pine Barrens forest with trees perhaps only 8-feet-tall at most. This is the “Pygmy Pines” or “The Plains.” The theory is the stunted growth in this area is caused by repeated fires. 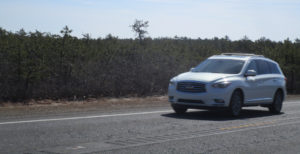 A sport utility vehicle drives on Route 539 through the Pygmy Pines, or Plains, in the Pine Barrens outside of Warren Grove, Ocean County. 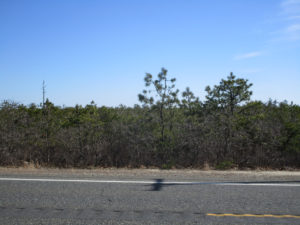 The Pygmy Pines, or Plains, on Route 539 in the Pine Barrens near Warren  Grove, Ocean County.

WITCH’S BROOM:  If you regularly walk the Pine Barrens, you are likely to have seen a “witch’s broom,” a thick growth of needles on a pitch pine, “Pinus rigida.” While it may look haunting, it is simply caused by disease, defect, infestation, or environmental stress.

A “witch’s broom” growth on a pitch pine, “Pinus rigida,” at the Cedar Bridge fire-lookout tower in Barnegat, Ocean County.

PAINTED ROCK IN THE PINE BARRENS:  Going back years, a rock along Route 539, on the section between Routes 70 and 72 in Lacey, Ocean County, had been painted in different ways according to the calendar — a Halloween jack-o-lantern, a turkey for Thanksgiving, and so on. But the rock, apparently on its way by truck to the Jersey Shore for erosion control when it somehow wound up along the road, took on an American flag, patriotic theme after 9-11 — the 2001, September 11, Tuesday, terrorist attack on American soil. No matter the artwork, the rock remains a landmark in the Pine Barrens. For more information on the rock, see http://www.jamesrahn.com/pages/other/personal/rock.htm. 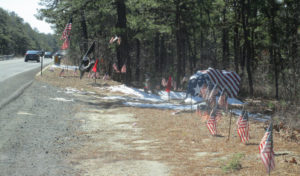 Since around 9-11 — the terrorist attack on American soil on 2001, September 11, Tuesday — the rock on Route 539 in the Pine Barrens of Lacey, Ocean, has taken on a patriotic theme. 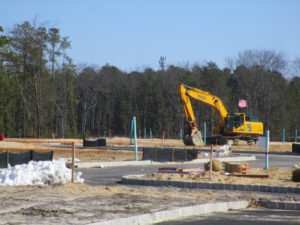 The (un)American way, development in the Pine Barrens, here in Whiting, Ocean County.

CROSSWICKS CREEK:  Crosswicks Creek’s headwaters are in the area of New Egypt, Ocean County. It, then, flows into the Delaware River at Bordentown. The federal Geological Survey has a gauge along Crosswicks Creek at Extonville on the boundary of Burlington and Mercer counties,  https://waterdata.usgs.gov/nwis/uv/?site_no=01464500. Along the waterway is Crosswicks Creek Park, part of the Monmouth County Park System, https://www.monmouthcountyparks.com/page.aspx?Id=2568. 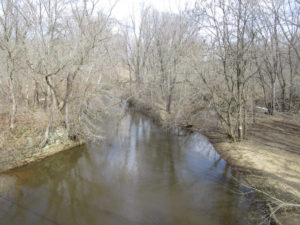 READING THE ENVIRONMENT:  When walking afield, let the land talk to you. It has a historical record. For example, the other day I was telling Eric Gehring, a naturalist for the Middlesex County Office of Parks and Recreation, about the dikes in the woods across Manalapan Brook from my house. Those dikes are a record of the area’s cranberry farming that ended around World War II. Then, during the week, on a portion of Manalapan Brook about 4 miles south of my house, I noticed wood planks sticking out of the ground. Remnants of a bridge? A dam? This remains a mystery. 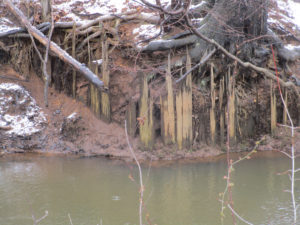 Remnants of a wooden structure on Manalapan Brook in southern Monroe, Middlesex County. 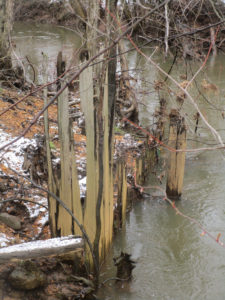 VOICES FROM AFIELD NO. 2, A MINK:  Frank  Ulatowski, an Englishtown-Manalapan outdoorsman, reported seeing a roadkilll of mink, “Mustela vison,” on Route 33 in Monroe, Middlesex County. So, mink are around.

I came across this deer, “Odocoileus virginianus,” on a utility line on the boundary of Hightstown and East Windsor in Mercer County. Deer live on the edge — the edge of the woods, where they seek refuge, and fields, where they browse.

CHANJ:  The state Division of Fish and Wildlife is promoting its initiative of CHANJ — Connecting Habitat Across New Jersey. CHANJ is looking to protect habitat and connect habitat through such things as land purchase, management of land, and safe wildlife passage at roadways. Roadway mitigation could include using culverts and bridges to have a safe pathway for wildlife to cross roads. The idea is have connectivity using core areas, which could be as little as 200 acres to as big as state regions such as the Highlands of North Jersey and, locally, the Pine Barrens.

UPPER MILLSTONE RIVER EAGLES:  It appears the pair of bald eagles, “Haliaeetus leucocephalus,” are feeding chicks in the Upper Millstone River nest on the boundary of Mercer and Middlesex counties, based on one adult on the nest while another flies to it. See the series of photographs: 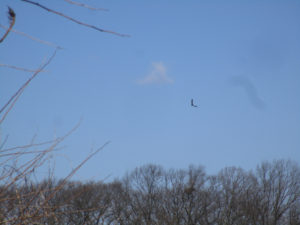 Photo 1:  An adult bald eagle circles the Upper Millstone River nest, which is below the eagle. 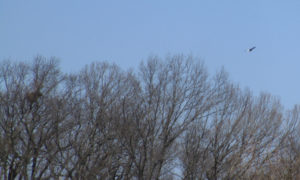 Photo 2:  The eagle continues to circle, its white tail easily seen in this photograph. The nest is to the left.

Photo 3:  The eagle circles back toward the nest, which is to the left, its white head clearly seen. 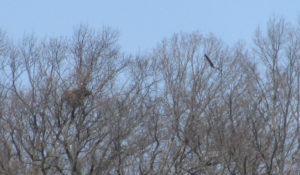 Photo 4:  The eagle flies toward the nest, which is to the left, where its mate awaits. The mate’s head is the speck of white above the nest. 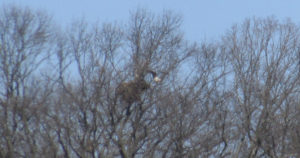 Photo 5:  The eagle is landing on the nest, its mate awaiting.

VOICES FROM AFIELD NO. 3, UPPER MILLSTONE RIVER EAGLES:  Frank Ulatowski, an outdoorsman from Englishtown-Manalapan, and his wife, Charlene, were visiting a business in the area of the Upper Millstone River nest of bald eagles, “Haliaeetus leucocephalus,” on the boundary of Mercer and Middlesex counties when a bald eagle flew by near the top of one of the single-story buildings. Frank wondered with all people around, how many noticed the eagle — as breeders in New Jersey, bald eagles are “endangered,” or under immediate peril, and, in general, “threatened,” or a species that can become “endangered” if conditions continue.

DUKE FARMS EAGLE CAMERA:  At Duke Farms in Hillsborough, Somerset County, bald eagles, “Haliaeetus leucocephalus,” are sitting on two eggs, the first of which is scheduled to hatch about Wednesday, March 21. There is a live-stream camera on the nest that can be seen at http://dukefarms.org/making-an-impact/eagle-cam/.  In New Jersey, bald eagles are “endangered,” or under immediate peril, as breeders and, in general, “threatened,” or a species that can become “endangered” if conditions continue.

The March 13, Tuesday, nor’easter flooding on the boundary of Plainsboro and  South Brunswick, Middlesex County.

BATSTO LAKE:  Batsto Lake in Wharton State Forest, Burlington County, is formed by the damming of the Batsto River. The lake is 40 acres, according to the New Jersey Fish Finder website. As for the river, it drains 67.8 square miles, according to the federal Geological Survey. 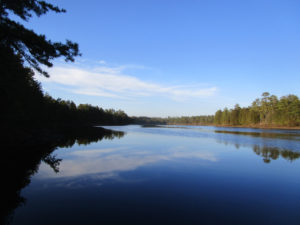 SIGNS OF THE PINES:  While traveling through the main part of the Pine Barrens, I came across a few interesting signs, both in the Bass River State Forest area of Burlington County: 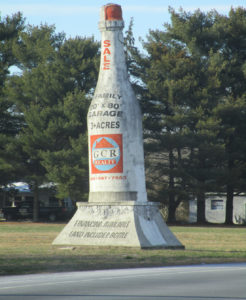 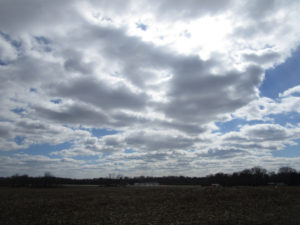 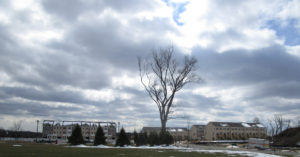 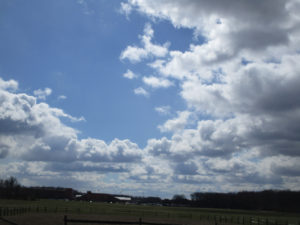 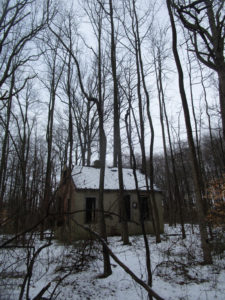 An abandoned cabin in the woods of Monroe, Middlesex County.