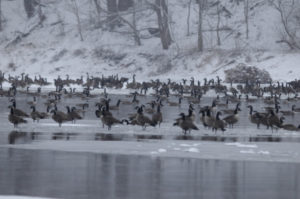 Canada Geese in a snowstorm on the South Branch appear at ease as the falling snow softens the scene.

The January blizzard raged, turning the darkness into an opaque curtain of white. Almost a foot of powdered snow covered the ground before midnight.

The broadcast news reported that NJ had declared a state of emergency shutting down roadways throughout the state. The setting was just right for the midwinter parade on the South Branch. Thousands attended and the main thoroughfare was jammed with local residents and visitors. As I stepped outside to get a head start on clearing the driveway, the sound of geese, thousands of geese, overpowered the drone of the wind driven snow. So impressive was the magnitude of the unalarmed chatter, I was compelled to investigate. Alerting my family where to search for the body, I headed into the storm.
The closer I got to the river the louder and more beckoning the sound became. Moving slowly through the trees toward the river bank, the din from the geese on the open water was deafening. The river was filled wall to wall with migrant and resident Canada geese. Some started to get up and fly. Others just drifted by. All appeared as black silhouettes against the snow and reflective water. Thousands upon thousands all in chorus, the rhythm and sound of their calls rose and fell as if one voice. Occasionally all sound would hesitate into a moment of absolute silence. The silence was as dramatic as the din.

Animals generally become fearless in extreme weather and at the height of this snowstorm the geese collectively tolerated my close approach.

As I closed in, the birds parted, momentarily leaving a void of reflective water. The surface was again soon covered with geese as the specter of an interloper was confidently dismissed.

The Geese were packed so tight; they appeared as if in a big cauldron that was being stirred. One group was drifting down with the current while the other was going back up stream in a re-circulating eddy below the island.

Aside from the geese, the river was filled with joined platelets of gray and white ice, strong enough to support several of the large birds. A display of motionless geese rode atop drifting ice flows, escorted by a cadre of even more geese floating alongside, all travelling at the same speed.

This looked all so familiar. Suddenly it struck me. I could have been watching a fourth of July parade with themed floats and accompanying marchers. Certainly the band was playing a familiar tune as spectator geese lined the banks and joined in the chorus.

How odd that here was a gathering of what seemed to be all the geese in New Jersey having their own parade. As if to celebrate some event sacred to the hearts of all geese, each bird taking comfort in knowing they owned the night and there would be no human eyes to witness their ethereal rite.