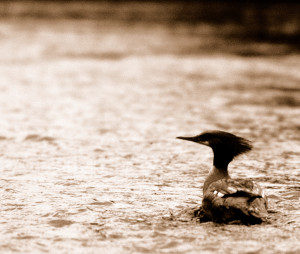 A female common merganser pauses in the fast shallow water of the South Branch where clams and crayfish abound.

“Eye of newt, and toe of frog, Wool of bat, and tongue of dog, Adder’s fork, and blind-worm’s sting, Lizard’s leg, and howlet’s wing,– For a charm of powerful trouble, Like a hell-broth boil and bubble.”

The witches brew in Shakespeare’s “Macbeth” revealed a magical recipe perhaps intended to capture a victim’s soul for evil consumption. Truth is the witches were brewing magic bait they intended to use the next morning on the opening of trout season. Shakespeare spun the story to keep the ancient fishing formula secret and so, “Macbeth”, was written to obscure the truth and ‘Shakespeare’ is now a company that makes fishing gear.

I know it’s hard to believe, but sure enough similar formulas are used today and found in books like Art Flick’s New Streamside Guide or the old classic, AJ McLanes Fishing Encyclopedia. Artificial fly recipes used to catch trout read like the midnight brew mixed during the dark of the April moon in “Macbeth”.

Pale hairs from a “red fox belly are mixed with sandy poll from a hare’s ear”;  One dark ginger hackle and a quill from a Rhode Island Red rooster soaked overnight and blended with gray fox underbelly and hair of claret seal are combined with three strands of skunk tail; Peacock herl, scarlet silk, flat gold tinsel are bound with muskrat belly fur dubbing; Along with feathers from the cheek of a partridge, wing of wood duck and porcupine quills soaked in Clorox, we have a comprehensive list of standard ingredients found stocked on the shelf above any self respecting witch’s eternally boiling cauldron. The addition or deletion of the slightest ingredient is all that differentiates intended purpose. Good vs evil or brown trout vs rainbow trout, nuance makes the difference.

The use of feathers to catch fish on the fly is not exclusive to fishermen casting hooks adorned with feathers. Alternatively, the feathers are still on the birds and the hooks are in the form of beaks and talons.

It is a wonder to realize the waters of the North and South Branch are rich enough to support the variety and quantity of fish required to have most of these birds as year round residents. The recent dam removals on the Raritan River will ensure an even greater supply of forage fish and a brighter future for not only fish eating birds but other game fish to improve what is already a fisherman’s paradise.

Driving along the river, I experienced a Kodak moment, where a female merganser surfaced with what looked like a decent sized bluegill in its serrated beak. Mergansers are the most commonly seen diving duck locally and are easily differentiated by gender as the males have a contrasting dark green head, black and white body while the females are white and gray with rusty red colored heads and a pronounced crest as if coiffed to resemble a wind blown hair style. Both sexes have a bright orange beak. Mergansers swim underwater to search for food that includes crayfish as well as the plentiful mollusks that populate our rivers.

Great blue herons seem to be next most common fish eater and are often seen standing tall and still as statues as they probe shallow water for small and large fish as well as frogs and salamanders.

Much shorter and less often seen is the green heron and seasonally, the pure white common egrets at summer’s end.

Our smallest fisheater is the belted kingfisher. About the size of an extra large bluejay and quite similar in color, bearing a pronounced crest and white throat patch with a blue bandana across its throat.

The arrival of fishing season, this April 6th at 8am, is a reminder of the flocks of feathered fishers, not bound by seasons or licenses, which share the bounty of our local waters.