Except as noted, article and photos by Joe Sapia. 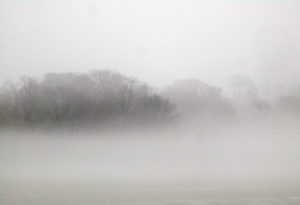 Rain and fog over “Jamesburg Lake” (Lake Manalapan) on the Jamesburg-Monroe boundary, Middlesex County, on the morning of February 11, Sunday.

HEAVY RAIN:  The National Weather Service reported these preliminary rainfall totals in Jersey Midlands counties for the February 10-11, Saturday-Sunday, rainfall. The numbers are not necessarily a comprehensive listing, so there could have been higher and lower totals:  Burlington —  1.55 inches at Chesterfield to 4.02 at west northwest of Tabernacle; Hunterdon — 1.00 at northwest of Milford to 1.81 at Wertsville; Mercer — 1.44 west of Princeton to 2.21 west of East Windsor; Middlesex — 1.74 at Sayreville to 2.28 at East Brunswick; Monmouth — 1.27 at North Middletown to 2.82 at Howell; Ocean — 1.23 at Island Heights to 3.19 at Barnegat Inlet; and Somerset — 1.12 at Martinsville to 2.19 at Middlebush. 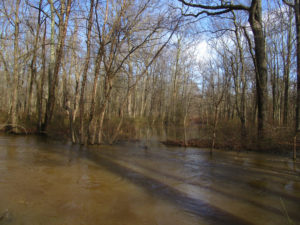 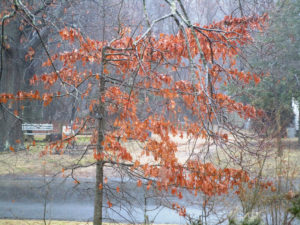 The leaves of an oak tree, genus “Quercus,” light up my front yard on a rainy day.

POOR DRAINAGE:  A drainage issue flying under the radar is the clogging up of swamps — through filling them in purposely, by unintentionally clogging them by dumping leaves and other vegetative debris in them, and the overtaking of these wetlands by invasive species, such as phragmites reed grass. As the swamps clog and water is displaced, more flooding will happen.

In this Sunday, February 11, photograph of Helmetta Road, in the part of Monroe between Jamesburg and Helmetta, two problems are obvious: One, Helmetta Road (Middlesex County Route 615) passes through a low, swamp area and easily floods and, two, the surrounding swamps are clogged with phragmites. With phragmites, what is seen above ground is only an estimated one-fourth to one-third of the plant. Drive by wetlands and look at their changing nature — the overtaking by phragmites, easily identified by its tassel-like top.

Phragmites eradication projects are now underway or planned — for example, by Middlesex County Parks and Recreation at Helmetta Pond — but it is a complicated, labor-intensive, and costly undertaking. Combining that with the issue being ignored, by far not enough remediation is being done.

But something needs to be done, if not to protect the environment, then for practical anti-flooding reasons.

Look at this United States Geologic Survey website, https://nwis.waterdata.usgs.gov/nwis/peak…, for the highest flows per year on Manalapan Brook at the gauge on the Spotwsood-Monroe boundary. Over the last 60 years, four of the highest flows were in a recent 10-year period, from 2005 to 2014.

Keep covering up soil, keep filling in wetlands, and let these drainage issues get out of control. People will lose homes — think Tropical Storm Irene in 2011 and Superstorm Sandy in 2012, again in recent and back-to-back years — and be otherwise inconvenienced. Just wait…. 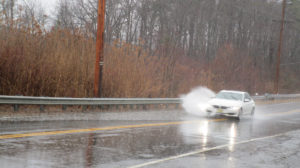 The combination of this section of Helmetta  Road (Route 615) in Monroe, Middlesex County, passing through a swampy area and that area clogged with common reed grass, genus “Phragmites,” equals poor drainage.

SNOWFALL UPDATE:  At Helmetta-Jamesburg-Monroe in Middlesex County, the snowfall on Saturday, February 17, was 3 inches, bringing the seasonal total to 21.5 inches. (The average seasonal snowfall at New Brunswick, Middlesex County, about 7.5 miles away, is about 26 inches. We still have about seven weeks left in the snowfall season.)
These figures for Saturday’s snow are from the National Weather Service. These are reported figures, not necessarily complete figures:  Burlington County — 1.2 inches in the Eastampton and Tabernacle areas to 4.0 in Wrightstown; Hunterdon County — 4.3 in Wertsville to 9.3 in the Clinton area; Mercer County:  2.0 in the Lawrence area to 4.7 in the Hopewell area; Middlesex County — 2.0 in the Old Bridge area to 3.7 in the Cheesequake area; Monmouth County — 1.3 in Rumson to 3.0 in Colts Neck; Ocean County:  .5 to 1.5, both in the Brick area; Somerset County — 3.3 to 7.4, both in the Bridgewater area; and in Pennsylvania’s adjoining Bucks County — 1.0 in Penndel to 6.4 in Springtown. 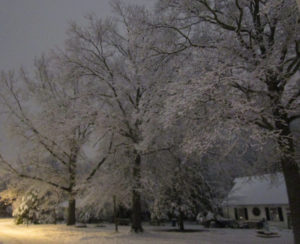 At night, as the Saturday, February 17, snow was ending, in my neighborhood in Monroe, Middlesex County.

SPRING PEEPER TREEFROGS:  On the night of February 11, Sunday, I stepped outside my Monroe, Middlesex County, house and heard the nostalgic call of spring peeper treefrogs, “Pseudacris crucifer,” coming from the Manalapan Brook floodplain — kind of like sleigh bells. In February! But it was about 63 degrees on the night of a very rainy day. They are early maters — the calling likely either looking for mates or signaling territory. If you go looking for them,  they will quiet as you approach and you likely will never find one. I recall seeing them only about 3 times in my 61 years. A check of my field notes going back to 1992, with only 2001 missing, shows this date as the earliest I had recorded for hearing them in a season. They likely will call and not call until we get consistently warmer weather. So, it will be interesting to see when they start calling strongly and consistently. I view peeper calls four ways: 1, these early calls; 2, regular calling; 3, late calling; and 4, an out-of-season aberration. As for their species name “crucifer,” they have a cross-like mark on their backs. 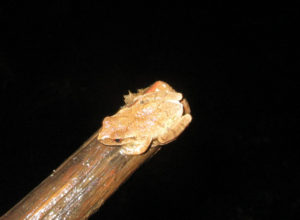 A spring peeper treefrog found in the Manalapan Brook floodplain of Monroe, Middlesex County, in 2017, March. In this photo, the X-like or cross-like mark on their upper to middle back is hard to see.

UPPER MILLSTONE RIVER EAGLE NEST:  Anne Price, my fellow volunteer monitor of this nest on the boundary of Middlesex and Mercer counties, had a fabulous experience while watching the nest, where the bald eagles, “Haliaeetus leucocephalus,” are sitting on an egg or eggs. She watched a mature eagle flying with an immature. So, there is at least one immature in the immediate area of the nest. We expect the egg/s to hatch in late February or early March. We are not releasing the exact location of the nest to protect it because eagles, as breeders, are considered “endangered,” or in immediate peril, in New Jersey and, in general, are considered “threatened,” meaning if conditions deteriorate, they could become “endangered.” 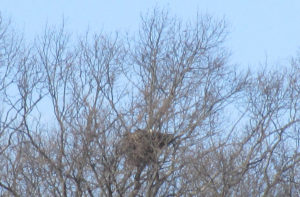 The head of a bald eagle pokes out of the Upper Millstone River nest. The eagles are sitting on an egg or eggs.

‘SPOTSWOOD LAKE’:  On the flat-terrain Coastal Plain, there are few, if any, natural bodies of water. Instead, the water bodies are human-made, either by digging a depression or by damming a waterway. The approximately 60-acre “Spotswood Lake,” properly known as “DeVoe Lake” or “Mill Lake,” is an example — formed by the damming of Manalapan Brook shortly before it joins Matchaponix Brook on the Spotswood-Old Bridge boundary in Middlesex County to form the South River. 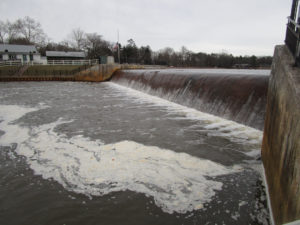 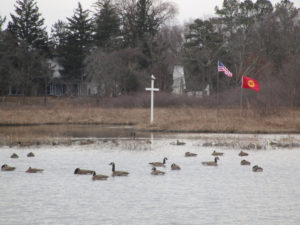 This photograph of “Spotswood Lake” takes in a lot:  wildlife (Canada geese, “Branta canadensis”), religion (a cross), patriotism (the American flag), and history (in the background, an old pump house to the right of the residential house).

BROKEN PITCH PINE:  A branch on the pitch pine, “Pinus rigida,” in my backyard in Monroe, Middlesex County, was leaning. When I checked it, I saw that it was damaged. So, I chopped it off. I could put it out on the road, where the township picks up vegetative waste. Instead, I put it to use on-site, adding it to my backyard wildlife brush pile — often a haven for birds and presumably other wildlife. I try to keep my yard as a quarter-acre farm, discarding something in one place and using it elsewhere on the property. 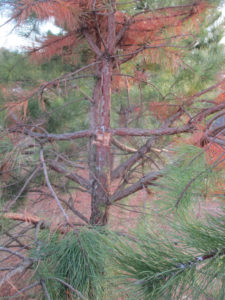 The broken branch area of the pitch pine. 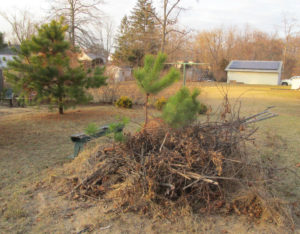 ATLANTIC OCEAN TEMPERATURES:  The Atlantic Ocean temperature along the New Jersey coast was running at about 39 to 41 degrees on the February 17-18 weekend.

FULL MOON:  The next full moon is March 1, Thursday, the Full Lenten Moon.

MARJORY STONEMAN DOUGLAS:  When I heard of the Wednesday, February 14, school shooting in Florida that took 17 lives, I thought of the school’s name:  “Marjory Stoneman Douglas High School.” I hope Douglas’s name is not predominantly associated with the place where 17 murders took place; Douglas was an acclaimed environmentalist, author of the seminal 1947 “The Everglades:  River of Grass.” Her name deserves better. 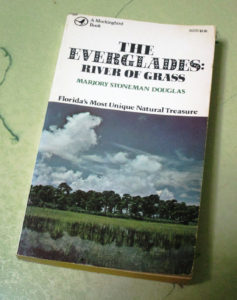 My copy of Marjory Stoneman Douglas’s classic book, “The Everglades:  River of Grass.” 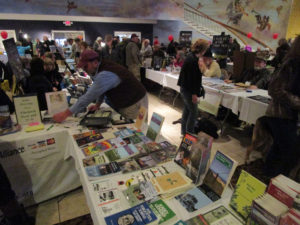 A scene from the 2016 Lines on the Pines event. This is a great event, one that I try to attend every year.

AS THIS FICKLE WEATHER WEEK ENDS:  Sun, rain, and snow. Cold and warm temperatures. Soon, gardening and farming will be here. Until then…. 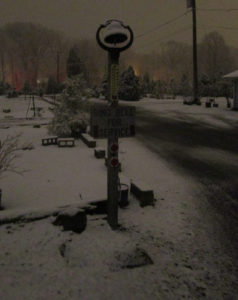 On this snowy night of Saturday, February 17, the bell will have to await its time to be rung at Krygier’s Nursery in South Brunswick, Middlesex County.

Joe Sapia, 61, is a lifelong resident of Monroe — in South Middlesex County, where his maternal family settled more than 100 years ago. He is a Pine Barrens naturalist and an organic gardener of vegetables and fruit, along with zinnias and roses.