Except as noted, article and photos by Joe Sapia 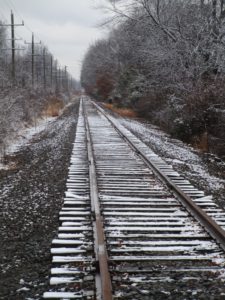 On the ConRail railroad tracks between Prospect Plains and Cranbury Station on the boundary of Cranbury and Monroe, Middlesex County.

JEEP-LESS, THE BAD: My Jeep Wrangler has been in the shop. A metal plate in the clutch area cracked. When mechanic-friend Frank Ulatowski told me the parts distributor said, I never ordered this part before, I knew this could be trouble. The part, being shipped from Detroit, finally did come in and Frank installed it, but the repair was set back by the need for a second part. The Jeep should be ready Monday. For the past week, though, my travels have been limited – generally confined to walking in my hometown of Monroe and the bordering towns of Helmetta, Spotswood, South Brunswick, Cranbury, and Jamesburg.

JEEP-LESS, THE GOOD: With no work scheduled, I decided to not rent a motor vehicle, instead hoofing it. I have thought about this for years – on my days not working, try to only walk or bicycle. So, I have been constantly walking, along with some bicycling. My longest walk was 11 miles – a trek home from the doctor’s office for a followup on my annual exam in Monroe (to which I taxied), with a detour to Teddy’s luncheonette in Cranbury and, later, supper in Helmetta. Aside from the health benefits of walking, it has taken me on routes less-traveled and slowed me to observe better. So, I have a lot of cool observations to pass along. 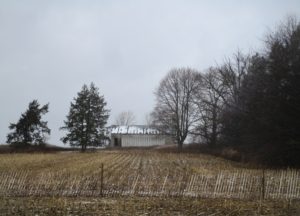 An old farm site in Cranbury.

SNOWFALL UPDATE: The two snowfalls on Tuesday, January 30, amounted to an estimated 1.0 inch of snowfall at my Monroe house. This brings the seasonal total to 18.0 inches. The normal season average is about 25.8 inches, recorded in New Brunswick, about 7-1/2 miles away; We still have about 2-1/2 months of snow potential to reach the average. 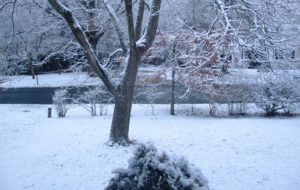 The view I awoke to, as seen from my bedroom window, on Tuesday, January 30, in Monroe.

‘POWDERED SUGAR’ SNOW: When I awoke Tuesday, January 30, I found a snowfall that looked as though the vegetation was covered with powdered sugar. It was a beautiful find to start the day! 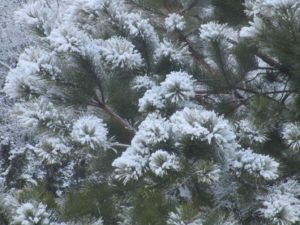 The “powdered sugar” snow on the pitch pine, “Pinus rigida,” in my backyard in Monroe.

NORTHERN HARRIERS, CONTINUED: I continue to see northern harriers, “Circus cyaneus,” more than I have ever seen. This week, I saw one at Helmetta Pond, Middlesesex County – the first time I recall seeing one there. Remember, as a nester, New Jersey lists them as “endangered,” or in imminent peril. Look for them hunting game by flying low above fields or marshes. They are sleek and have a white rump patch – females are brown, males are gray-white. As Roger Dreyling, birder extraordinaire from Monroe, noted, “I like harriers, especially males, which are sometimes called ‘gray ghosts.’” 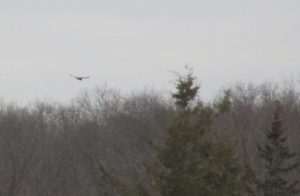 UPPER MILLSTONE RIVER EAGLES NEST: Anne Price and I, volunteers for the state Department of Environmental Protection, have been watching this nest. We agree it appears the eagles are incubating an egg or eggs. For example, I saw an eagle fly by the nest and perched nearby, while it appeared the other one was in the nest. Because bald eagles are a jeopardized species in New Jersey – “endangered,” or under imminent threat as a nester, and “threatened,” or could become “endangered” if conditions persist, in general – we are being discreet in identifying the location of the nest. (In the 2017 state eagles report, http://www.state.nj.us/dep/fgw/ensp/pdf/eglrpt17.pdf, this nest is listed as No. 184, “Upper Millstone.”) 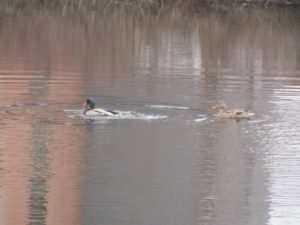 Mallard ducks, “Anas platyrhynchos,” at a fire-suppression pond at the former George W. Helme Snuff Mill in Helmetta. The more colorful male is on the left.

VOICES FROM AFIELD, EAGLE SIGHTINGS: I keep saying, if you want to see bald eagles, look up into the sky. Various reports came in during the week week. Michele Arminio of Monroe reported seeing a flying eagle at Milltown Road, between Route 18 and Ryders Lane, in East Brunswick. Janice Weinman reported seeing one at the South River and its wetlands on the boundary of Old Bridge, Sayreville, and East Brunswick: “Flying out of the marshlands area on the east side of Bordentown Avenue, flying towards east Brunswick. It was an adult as it had its white head, but not too big. I was surprised to see one there. I was not aware of any in that area.” Actually, this one could be nesting in the Old Bridge area. A pair, there, has repeatedly moved its nest and, last year, a nest could not be located. Paul Reed reported an eagle at Helmetta Pond. Roger Dreyling of Monroe reported an immature eagle at “Jamesburg Lake” (Lake Manalapan) in Monroe. Duke Farms in Hillsborough, Somerset County, has a camera on its eagle nest, http://dukefarms.org/making-an-impact/eagle-cam/. 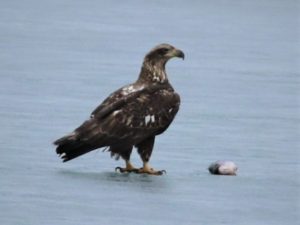 An immature bald eagle – notice the lack of white head and tail – with a fish at “Jamesburg Lake” (Lake Manalapan) in Monroe in January. (Photograph copyright 2018 by Roger Dreyling)

MUTE SWANS: Ugh, I dislike mute swans, “Cygnus olor,” non-natives that hurt local ecosystems through their aggressive eating of aquatic vegetation and scaring off native species. But they are naturalized here…. This week, I saw a pair at Helmetta Pond. 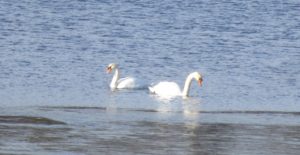 BACKYARD SHRUB PILE: I keep a pesticide- and fertilizer-free yard. It is only a quarter-acre, or about 10,000 square feet. But it is productive — a vegetable and fruit garden of more than 1,000 square feet, bird-feeders, bird baths. Roughly only 10 percent of rainwater drains off the property. One of the pro-environment bits of my property is the brush pile and tall-grass patch I keep in the backyard. The brush pile, for example, is a place for birds to retreat to and perch. This week, I photographed a few house sparrows, “Passer domesticus,” is the pile. (I was happy to see the brush pile being used, despite being used by house sparrows, a non-native species.) 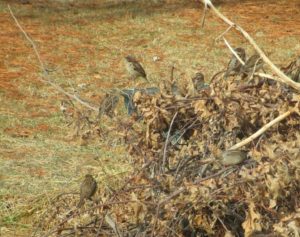 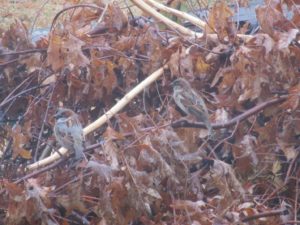 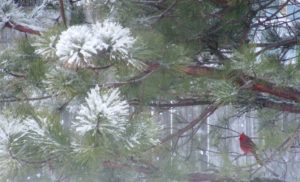 A cardinal, “Cardinalis cardinalis,” in the backyard pitch pine. 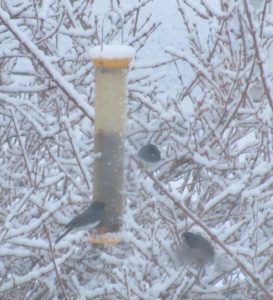 Snowbirds – one at the niger feeder, one perched nearby, one flying in. 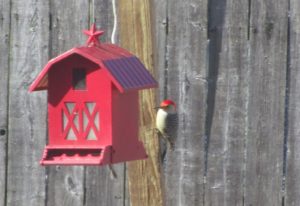 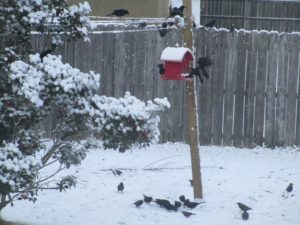 Grackles at the feeder.

VOICES FROM AFIELD, ROBINS: “Polish Paul” Migut, a friend going back to childhood, checked in on robins, “Turdus migratorius.” He, too, had them in his South River yard. “Thursday (February 1) morning, looking into my rear yard, spotted about 10 to 12 robins,” Paul said. “Looked very healthy, plump.” Again, some may consider a robin as a sign of spring, but they are year-around.
RED-TAILED HAWKS: This week, I was able to get some pretty close-up photographs of red-tailed hawks, “Buteo jamaicensis.” Looked for them perched, soaring with a creamy underbelly look and rust-colored tail, or a big bird flying and flapping its wings about a half-dozen times. 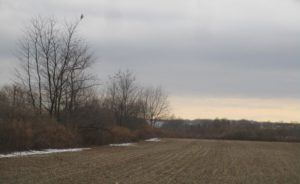 A red-tailed hawk perches in a tree and watches over farmland in South Brunswick. 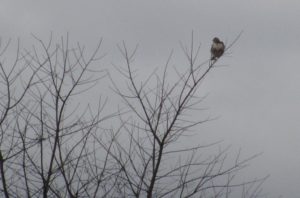 A closeup of the South Brunswick red-tailed hawk. 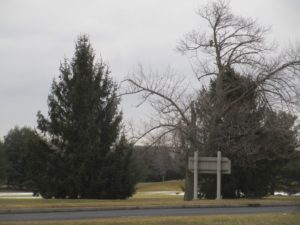 A red-tailed hawk perches in a tree near New Jersey Turnpike Exit 8-A in Monroe.

DEAD GREAT BLUE HERON: I was hiking in the Pine Barrens around Helmetta and at Cranberry Bog came across a dead blue heron, “Ardea Herodias.” It was lying on dry ground, inches from the water. Its eyes were in place and its body supple, so it probably was not dead all that long. I saw no obvious cause of death. Its anal area was ripped up a bit, but that likely was caused by a scavenger after death. I talked to Rick Lear, head of the Middlesex County Office of Parks and Recreation, about it and he speculated it died of starvation, because of the difficulty of finding food, such as aquatic animals and small mammals, this time of year.

A great blue heron I found dead at Cranberry Bog in Monroe.

FARMLAND, DEVELOPABLE LAND: I recall saying, “Potatoes like dry feet and so do developers.” Well, look at this gravelly, or well-drained, farmland in South Brunswick. Nice developable land, unfortunately! Even more unfortunate is it being located on the New Jersey Turnpike, near an exit, 8-A.

PHRAGMITES: I am noticing a lot of invasive reed grass, genus “Phragmites.” This stuff really clogs wetlands and is difficult to control. It is not only bad for the environment, but also for drainage. Beware in heavy rain, this will contribute to flooding. And phragmites invasion is only getting worse, from what I see. 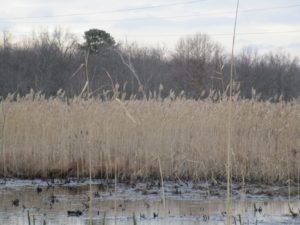 BARKING FOX: One night, I stood in my yard and listened to this yip, yip, yip call from the woods or near the woods. It was a red fox, “Vulpes vulpes.” So, do not only look, but listen. Nature is all around us.

NON-POINT SOURCE POLLUTION: I was walking in the Manalapan Brook floodplain in Helmetta and there it was, non-point source pollution – garbage — that got into the water system and floated about. Ever seen those notices about garbage getting into storm drains? They really mean it. Throw a plastic bottle out of a car miles inland and, at least in theory, it could wind up in the ocean. Even if it does not wind up in the ocean, it could wind up in the freshwater system. And even if it does not do that, it is still litter.

Non-point source pollution in the Manalapan Brook floodplain at Helmetta.

ATLANTIC OCEAN TEMPERATURES: The Atlantic Ocean temperature along the New Jersey coast was running at about 35 to 37 degrees on the February 3-4 weekend.