Except where noted, article and photos by Joe Sapia 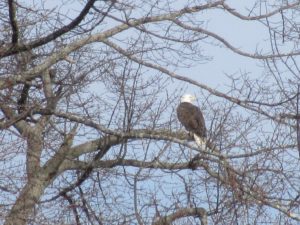 A bald eagle perched in a tree near its “Upper Millstone River” nest on the boundary of Middlesex and Mercer counties.

UPPER MILLSTONE RIVER EAGLE NEST:  As the state Department of Environmental Protection monitors of the nest, Anne Price and I have been watching the pair of bald eagles, “Haliaeetus leucocephalus.” By week’s end, they were still in pre-nesting mode – flying in courtship, perched near each other near the nest, perched together on the nest. Stay tuned, there should be an egg or eggs during the week of January 28. Because bald eagles are a jeopardized species in New Jersey – “endangered,” or under imminent threat as a nester, and “threatened,” or could become “endangered” if conditions persist, in general – we are being discreet in identifying the location of the nest. (In the 2017 state eagles report, http://www.state.nj.us/dep/fgw/ensp/pdf/eglrpt17.pdf, this nest is listed as No. 184, “Upper Millstone.”) 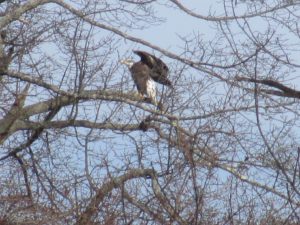 The eagle, spreading its wings, on a tree near the nest.

NORTHERN HARRIERS:  I love northern harriers, “Circus cyaneus,” flying low above fields, searching for mammals to eat. They glide eloquently, putting on quite a show. This week, I was watching them on the Monroe-Cranbury boundary, Middlesex County – one at the wetlands mitigation bank at Cranbury Station, then around the wetlands mitigation bank at Wyckoff’s Mills. I did not get a good look at the Cranbury Station “marsh hawk,” but watched the Wyckoff’s Mills one for several minutes, flying back and forth, seemingly unbothered by me. The glimpse I got of the Cranbury Station harrier suggested it was a male, because it looked to be light-colored. The Wyckoff’s Mills harrier was a female – brown in color. Harriers, whether male or female, are easy to identify – flying within feet of the ground, sleek-bodied, having a white rump patch. 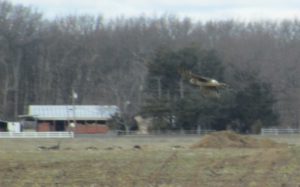 A northern harrier flies across farmland in at Wyckoff’s Mills on the Cranbury, Middlesex County, side of the road. Brown in color means it is a female. Notice the white rump patch females and males both have. 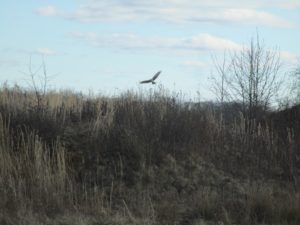 The female northern harrier flies above the wetlands mitigation bank on the Monroe side of the road at Wyckoff’s Mills, Middlesex County. 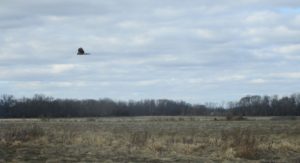 The female northern harrier flies on the Monroe side of the road at Wyckoff’s Mills, Middlesex County.

BLACK SQUIRRELS:  If you want to see black squirrels, check out Princeton or Cranbury. Several years ago, I heard a story, although I do not know if it is true, that someone from Cranbury went to Princeton, trapped some black squirrels, and brought them to Cranbury. Actually, black squirrels are just a black phase of a gray squirrel, “Sciurus carolinensis.” Gray squirrels have no gray hairs — only white, black, and brown with the combination giving them a varied appearance. 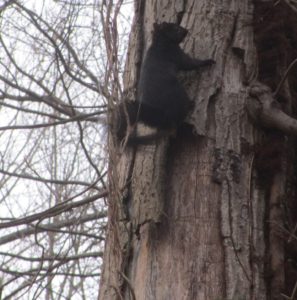 A black-phase gray squirrel in the woods between Wyckoff’s Mills and Cranbury Station in Cranbury, Middlesex County.

DEER IN THE DAYTIME:  Twice in one day, I saw deer, “Odocoileus virginianus,” seemingly unbothered in the daytime in areas with a lot of human traffic. At noon, I saw one in a residential area on Riva Avenue, East Brunswick, Middlesex County. Then, 3-1/2 hours later, one was in a lawn area of Thompson Park, Monroe, Middlesex County. I thought this daytime lack of fear of these deer was brazen. 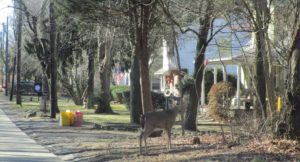 The deer on Riva Avenue in East Brunswick, Middlesex County. 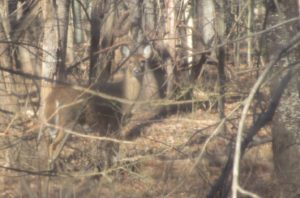 The East Brunswick deer fled me, then checked me out from the relative safety of the woods. 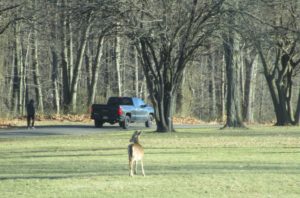 A deer in Thompson Park in Monroe, Middlesex County

ROBINS, A SIGN OF SPRING?:  Some may think of robins, “Turdus migratorius,” are a sign of spring. But, actually, they are around in the winter. Perhaps more in the woods this time of year because of berries as a food source. Then, as it warms, with insects and worms becoming available, in our yards where we readily see them. But a little group of robins popped into my yard, across from woods, this week. (I have this affection for robins, because, I think, it was the first bird I learned to identify as a child.) 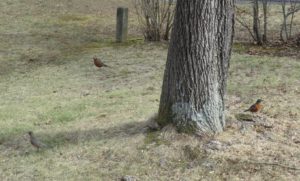 Robins in my front yard in Monroe, Middlesex County.

BIRDS, STARLINGS:  Recently, I have noticed flocks of starlings, “Sturnus vulgaris.” The photograph shows them on farmland in Monroe, Middlesex County. (They are non-native, brought from Europe to North America in the 1800s and, now, naturalized here.) 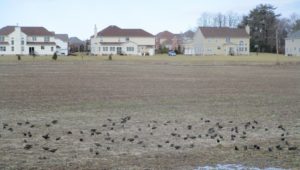 A flock of starlings on farmland in Monroe, Middlesex County.

YARD BIRDS:  I was able crank off photographs of a white-throated sparrow, “Zonotrichia albicollis,” in one of my favorite bird-watching areas – through my living room window in Monroe, Middlesex County. 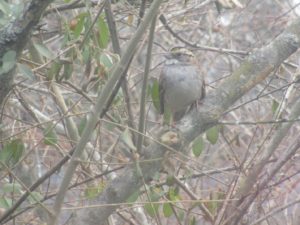 A white-throated sparrow in my front yard in Monroe, Middlesex County.

STINK BUGS:  With the cold weather, I have an occasional brown marmorated stink bug, “Halyomorpha halys,” invading my house. I exterminate them. Their stink is not bad – more an earthy organic smell than a nauseating one. But they are highly invasive non-natives that could be devasting to farming. They have been documented for only about 20 years, believed to have arrived from East Asia to the Allentown, Pennsylvania, area via cargo. See https://njaes.rutgers.edu/stinkbug/. 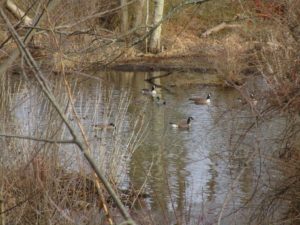 JERSEY MIDLANDS PRECARIOUS LOCATION:  The beautiful Jersey Midlands are situated precariously between two major metropolitan areas, New York City and Philadelphia, and in the heart of the Boston-to-Richmond megalopolis. So, we are under development pressure. But, sometime, when we see our natural world beauty, we may forget how close we are. Reminders are the ongoing development (and destruction of the Midlands); traffic on the New Jersey Turnpike, Garden State Parkway and elsewhere; jets passing overhead. 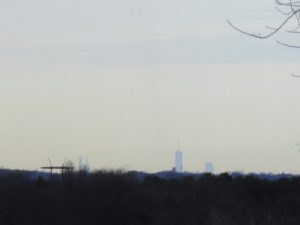 A view of the New York City skyline – the Freedom Tower, center, and the Empire State Building, just to the right of the utility line tower – through the eye of a point-and-shoot camera about 35 miles away from Redmond’s Hill at Thompson Park in Monroe, Middlesex County. 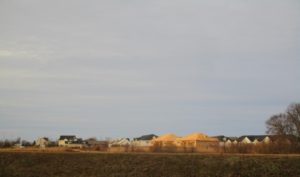 Here is an example of that development – in what I grew up calling “The Farms” of Monroe, Middlesex County.

PEGGY RENNER, ARCHERY CHAMP:  I stumbled upon an obituary for Peggy Renner, who died this week. She and her family ran an archery-outdoors store in the Jamesburg-Monroe area for years. A salute to Peggy.  Peggy’s obituary, http://www.legacy.com/obituaries/mycentraljersey/obituary.aspx?n=margaret-w-renner&pid=188001769&fhid=27060. 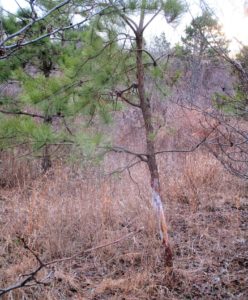 A deer rub of a male deer, “Odocoileus virginianus.” Bucks will rub the velvet off their antlers because they are hormonal and ready to mate, along with declaring their mating turfs. This is a pretty big rub, so there must be a pretty big buck around the Wyckoff Mills wetlands bank on the Monroe-Cranbury boundary, Middlesex  County.

SWEET GUM TREE:  Seeds from the pods of sweet gum, “Liquidambar styraciflua,” are a food for wildlife. This Internet site shows artsy uses for the seed pods, https://www.pinterest.com/beckyblue65/sweetgum-tree-seed-pods/. 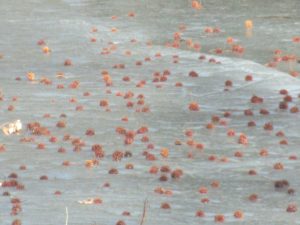 Seed pods of the sweet gum tree dot the ice of Devil’s Brook on the boundary of Plainsboro and South Brunswick, Middlesex County.

TURKEY VULTURES:  We may note turkey vultures, “Cathartes aura,” flying V-winged or eating roadkill. They are a common bird. This week, I caught two interesting photos, one of them on a roadkill, the other in silhouette illustrating their look. 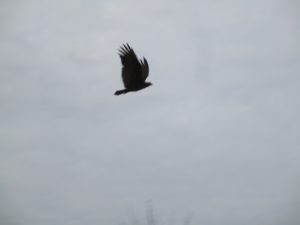 A turkey vulture. From Cornell University’s All About Birds website, “…They have long ‘fingers’ at their wingtips and long tails that extend past their toe tips in flight” — both evident in the photograph.

Turkey vultures on a deer carcass on Route 535 in Cranbury, Middlesex County.

SKY VIEWS:  This week’s sky photographs are from Middlesex County – Cranbury and Monroe. 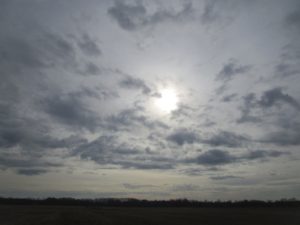 A farmland scene between Applegarth and Wyckoff’s Mills in Monroe, Middlesex County. 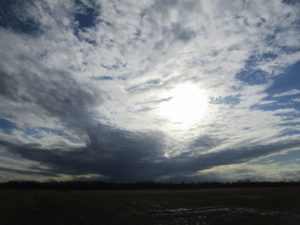 Again, a farmland scene between Applegarth and Wyckoff’s Mills in Monroe, Middlesex County. 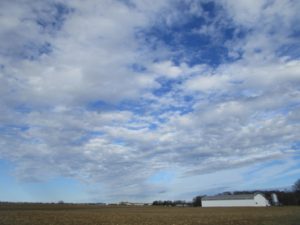 And, again, a farmland scene between Applegarth and Wyckoff’s Mills in Monroe, Middlesex County. 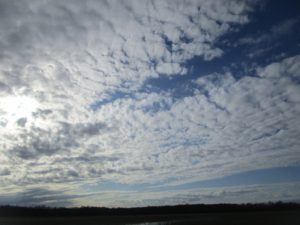 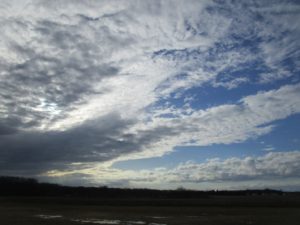 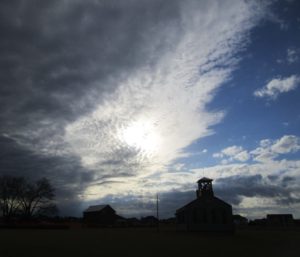 At the Dey Farm historic site in Monroe, Middlesex County. 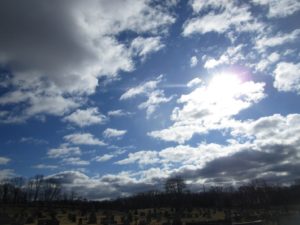 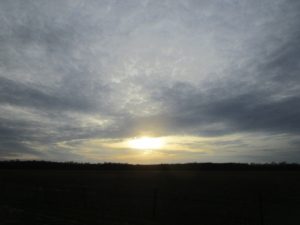 ATLANTIC OCEAN TEMPERATURES:  The Atlantic Ocean temperature along the New Jersey coast is running at about 35 or 36 degrees. 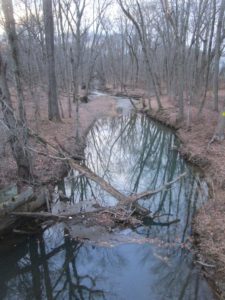 Cranbury Brook, here at Cranbury, Middlesex County, is part of the Raritan River watershed. Cranbury Brook runs from the Route 33 area at Millstone and Manalapan in Monmouth County. 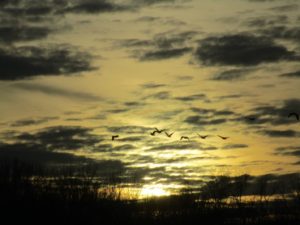 Canada geese flying at sunset on the border of Cranbury and Monroe, Middlesex County.