Article and photos by Joseph Mish

If all the water that ever flowed from the Raritan River drainage could be measured, its contribution to the depth of the ocean would be impressive. Think of that watershed as a collection agency for world’s oceans.

A closer look reveals the larger tributaries which feed the main branches; Rockaway creek, Black River/ Lamington River and the Neshanic River, all of which are clearly noted on maps.

No less important, are the numerous smaller brooks and creeks whose contribution is significant and whose names may appear only on old maps or engraved on marble plaques set in the structures that bridge their banks; Peter’s brook, Chamber’s brook, Pleasant run, Prescott brook, Assiscong creek, Minneakoning creek, Holland brook and the First, Second and Third Neshanic rivers. Hoopstick, Prescott and Bushkill are lesser known streams, within plain view, that bear no identifying name.

There are dozens more minor streams whose names appear nowhere except on an obscure online list. Each one eventually feeds into the Raritan or its two main branches above their confluence. Knowing someone’s name is a sign of respect. Calling someone by the wrong name can be embarrassing. However, the sign that identifies the North branch of the Raritan as the Raritan River proper, has failed to embarrass those responsible for posting such signs.

Many smaller seeps and springs whose names have been lost to the ages, add to the accumulated flow. Driving along the Lamington, for instance, there are endless watery traces, arising from springs within the woods that empty into larger tributaries. Many are just moist creases worn through the soil over time, which collect rainwater and snow melt to supplement the downstream daily flow.

These obscure water sources fascinate me simply because their anonymity and remote location arouses curiosity. Their presence also represents a convergence of habitat types that attract birds and wildlife. Though they bear no labels to honor their faithful contribution to the next blue line and ultimate confluence, their importance should not be overlooked.

Many springs which appeared on old maps no longer exist, eliminated by construction of sewer lines or filled in. As maps are revised and generations fade, these streams exist only in a cartographer’s archive.

My appreciation for these disappearing blue lines was heightened when I recently discovered that as a kid, I walked over Slingtail brook every day on the way to school. At some point this little stream was diverted through a sewer line under the pavement. More amazing, even older residents had no memory of that stream whose name has been lost to the ages.

An extended winter freeze, preserving snow from a previous storm, beyond its expected stay, was interrupted by a thaw and heavy rain. The melting snow joined the torrential rain as it flowed over frozen ground to collect in every shallow crease leading to the river. The water’s velocity was enhanced by the decreasing gradient of deep well-worn pathways etched in the earth.

Where water barely trickled most of the year, a proportional biblical flood now ensued.

The banks of the successively larger streams barely contained the accumulation of water delivered from the network of anonymous thin blue lines. Acting as a single entity, the collection agency if you will, the Raritan River drainage, faithfully delivered its contribution of sweet water to the world’s salty oceans.

Cattail brook arises from the convergence of a network of bubbling springs, supplemented by runoff from rain and snow fall. It begins as hardly more than a trickle, directed by gravity, from the south facing ridge of the heavily forested Sourland mountains. The DNA extracted from a drop of water, taken from the deepest canyon in the ocean, would trace its lineage back to cattail brook through its genetic progeny. Cattail gives birth to Rock Brook, a tumultuous and moody stream that joins the more sedate Bedens brook on its way to the Millstone river. The Millstone brings its accumulated genetic material to blend with that of the Raritan to make a final contribution to the earth’s deep blue oceans. 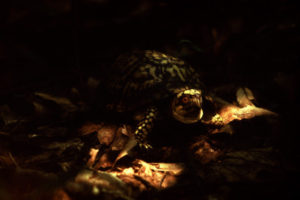 We use our imagination as we await the technology that can trace the oceans DNA back up Cattail brook to show a single drop of morning dew that dripped from a box turtles face, was a critical contribution to the blue ocean we see via satellite images of the earth.

Rock brook derives its character from the influence of gravity which changes its mood from an idyllic mountain brook to a raging torrent.