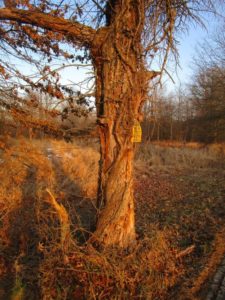 DRIVE-BY NATURALIST, GREAT BLUE HERON: As I was passing Carnegie Lake, which is in the area of Princeton, Mercer County, and Kingston, Somerset-Middlesex counties, I figured I would shoot a photograph of the winter-quiet lake. Quiet? Wrong! As I arrived, a great blue heron, “Ardea herodias,” flew from left to right, landing at the lake. I heard a squawk or squawks, with this heron and another confronting each other, perhaps because these solitary hunters of fish and other aquatic life did not want to share a territory. One flew off, while the other stayed put, providing a subject for my photographs. 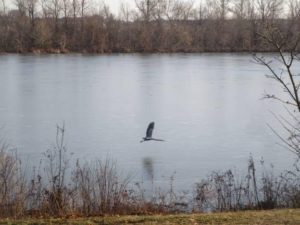 As I arrived at Carnegie Lake on the Princeton, Mercer County-Kingston, Middlesex-Somerset counties border, a great blue heron flew in. 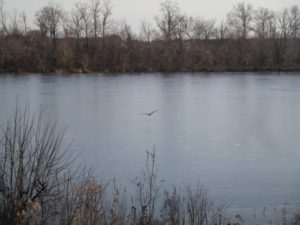 Then, there was a confrontation between two great blues, with one flying off.

Remaining was one blue heron, who cooperated nicely for photographs. 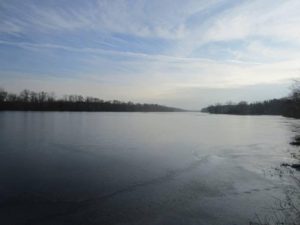 As for the winter calm of Carnegie Lake, it, otherwise, was there. 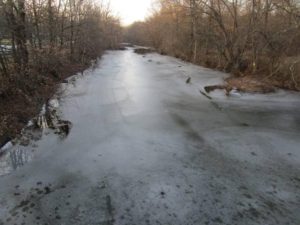 STONY BROOK: Stony Brook meanders for about 22 miles from the Ringoes area of Hunterdon County to the Princeton area of Mercer County, where it empties into the Millstone River. The brook drains approximately 65 square miles.

Punks, or cat-tails, genus “Typha,” with their fluffing-out seed heads, in the Stony Brook floodplain in the Pennington-Hopewell Township area, Mercer County.

IF YOU CANNOT GET TO THE ECOSYSTEM, BRING THE ECOSYSTEM TO YOU: Two geological provinces comprise the Jersey Midlands, the rolling hills and rocky Piedmont to the west and the flat, either gravelly or sandy, Coastal Plain to the east. Drive along the flat farmland on the Cranbury-Plainsboro border in Middlesex County and look west to the Princeton area hills in Mercer County, for example, and one would be looking from the Coastal Plain to the Piedmont. So, I was driving through the Pine Barrens around Helmetta and noticed a red shale pile of dirt, dumped on the side of the road in the Jamesburg Park Conservation Area, operated by the Middlesex County Parks and Recreation. Dumping! But this one takes the cake, the apparent dumping of Piedmont fill dirt in a sandy soil area of the Coastal Plain. Back up a truck alongside a road and dump fill dirt that you do not need! I take this as a personal affront because this is my home woods, which my maternal family has walked for more than 100 years, and in Jamesburg Park, where I am a volunteer of several years. The progress of dumping: litter to household debris to a different ecosystem! 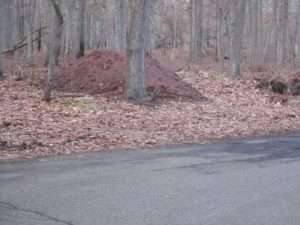 An illegally dumped pile of fill dirt, apparently Piedmont soil dumped in the Coastal Plain of the Pine Barrens around Helmetta, Middlesex County. 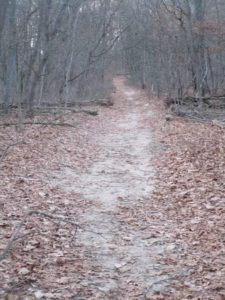 SNOW GEESE: I have not noticed any snow geese, “Chen caerulescens,” down from the Arctic. Bob Eriksen, a retired state Division of Fish and Wildlife biologist, checked in from just outside the Midlands in Warren County, saying, “Snow geese arrived, here, later than usual. Huge flocks came in overnight last Wednesday into Thursday morning December 13-14.” 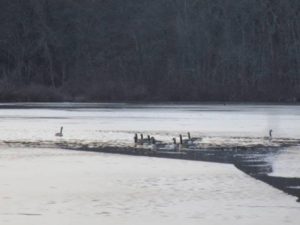 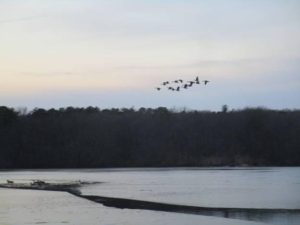 CANADA GEESE: I still stop to look at honking Canada geese, “Branta Canadensis,” in flight. And I get a bigger kick, perhaps, watching them land. While at Helmetta Pond, I noticed geese coming into the lake from the west, then swinging wide to the north and circling in for their landing. What a sight!

WINTER SOLSTICE: With the passing of the Winter Solstice on Thursday, December 21, daylight is increasing.

SNOWFALL TO DATE: To date, 8.0 inches at the Jamesburg-Helmetta area of Middlesex County. In this area, specifically New Brunswick, Middlesex County, the average seasonal total is 25.8 inches.

WEATHER: National Weather Service forecasting, along with other information, for the Jersey Midlands is at http://www.weather.gov/phi/. 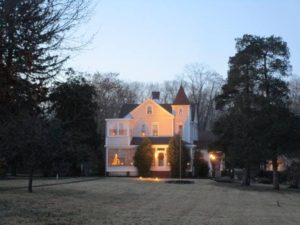 Merry Christmas from Helmetta. Here, the old Clemons house, one of the mansions associated in the 20th Century with the George W. Helme Snuff Mill — in this case, belonging to one of the mill’s upper level managers. According to house owner Carol Bohinski, “The Clemons mansion was built in 1890 by Arthur Clemons, brother-in-law to George W. Helme. Helme’s grandson, Arthur Helme Clemons, was a Helme Company President.”

Joe Sapia, 61, is a lifelong resident of Monroe — in South Middlesex County, where his maternal family settled more than 100 years ago. He is a Pine Barrens naturalist and a gardener of organic vegetables and fruit, along with zinnias and roses. He draws inspiration on the Pine Barrens around Helmetta from his mother, Sophie Onda Sapia, who lived her whole life in these Pines, and his Polish-immigrant grandmother, Annie Poznanski Onda. He gardens the same backyard plot as did his Grandma Annie and Italian-American father, Joe Sr. Both are inspirations for his food gardening. Ma inspires his rose gardening. Joe is a semi-retired print journalist of almost 40 years. His work also is at @JosephSapia on Twitter.com, along with Facebook.com on the Jersey Midlands page.