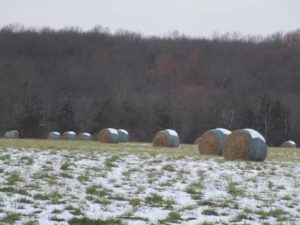 Fall meets winter with rolls of hay awaiting harvest on snow-covered farmland on the Princeton Ridge in Hopewell Township, Mercer County. The Princeton Ridge is one of three well-known pieces of hilly ground just north of downtown Princeton, the other two being Sourland Mountain and the Kingston Ridge.

SEASON’S FIRST SNOWFALL: My house in Monroe, Middlesex County, got its first snowfall of the season, this week – actually three snowfalls! The individual totals were December 9-10, Saturday-Sunday, 5.0 inches; December 13-14, Wednesday-Thursday, 1.5 inches; and December 15, Friday, 1.5 inches. All told, 8.0 inches. In my area, specifically New Brunswick, the average seasonal total is 25.8 inches. 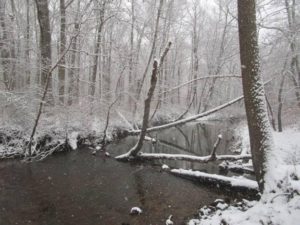 Snow falls along Manalapan Brook in Monroe, Middlesex County, during the season’s first snowfall, December 9-10, Saturday-Sunday. This locale is only a few hundred feet from my front door and I remember walking to this part of “The Brook” with my father when I was about 4-years-old, or more than 55 years ago.

A stream cuts its way through the Manalapan Brook floodplain in Monroe, Middlesex County, during the first snowfall, December 9-10, Saturday-Sunday. This locale, at the bottom of my street, is what I have always known as “The Swamp.”

SNOWFENCING: As we travel through the Jersey Midlands, we may see snow-fencing in place to prevent drifting across roadways. The idea is to get the fencing up before it snows and hope it does not snow after farmers need to get in their fields for spring plowing or, that is, before it ends snowing for the season. 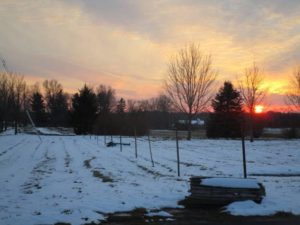 In Hopewell Township, Mercer County, this snow-fence was not up in time for the December 9-10, Saturday-Sunday, snowfall. Stakes in place, yes. Actual fencing, no.

GEMINID METEOR SHOWER: The Geminid Meteor Shower on the Wednesday-Thursday, December 13-14, overnight was a washout for me because of cloudy skies. More disappointing, because during that overnight, I was driving home from Baltimore and was hoping to be entertained for 2-1/2 to 3 hours. But that was a snowy night, so the viewing was not to be. Did anybody get lucky and see meterors? 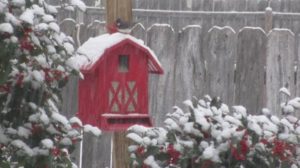 A snowbird sits on top of my backyard birdfeeder while snow falls Friday, December 15, in Monroe, Middlesex County. American holly, “Ilex opaca,” is in the foreground.

AROUND THE BACKYARD: I sitting at my desk, in a corner room with windows facing north from the side of the house and facing west into the backyard, when I heard a wheezing call. A hawk? I looked into the backyard and saw no birds around the feeder or elsewhere in the backyard. However, I did notice a squirrel, “Sciurus carolinensis,” on the pole holding the feeder. The squirrel was frozen in place, facing downward, or in fleeing position. Yes, I thought, that probably was a hawk I heard. When the predator is around, the lucky prey flees. 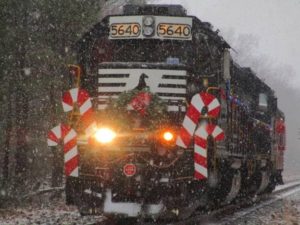 The annual ConRail Santa Train rumbled through Monroe, Middlesex County, this time while it is snowing December 9, Saturday. The Santa Train is especially fulfilling to me because it is a tradition of about 35 years; passes on railroad tracks my family has lived along for more than 100 years, as close as bordering the property and as far as my house, a quarter-mile; and, I have loved the freights on this line since my childhood days of the mighty Pennsylvania Railroad. It passes on the former line of the Camden-Amboy Railroad, the first railroad in the country, in the early 1830s, to replace equine power with mechanical power.

VOICES FROM AFIELD, CHRISTINE DENNELER: Christine Denneler, one of my Pine Barrens mentors over the last 35 years, checked in, regarding hunting: “Since most of my husband’s family is gone, hunting is not talked about at the holiday table as it was in the old days. (Late husband) Bill was not an avid hunter as was his grandpop, but he and his father liked the camaraderie.” (Chris has been a backbone of hiking in the Outdoor Club of South Jersey, www.ocsj.org, for decades. To go on a Chris Denneler hike is to learn the Pine Barrens.)

TONY’S FARM AND GARDEN CENTER: I was driving home from South Jersey and took advantage of passing Tony’s Farm and Garden Center — started and run by the Ciaccio family in Robbinsville, Mercer County, since 1946 — by stopping in. I have been patronizing Tony’s – in my case, for houseplants, vegetable plants, and garden supplies – for decades. It is one of my favorite places in the Jersey Midlands. Not only was it holding on to the 2017 gardening season, but it was decked out for Christmas. So, I bought a Christmas cactus – my first shot at one, so let us see if I can keep it alive – and two devil’s ivy houseplants – which even I have a hard time killing. (A shout-out to Ciaccio family members, especially young Tony, for their quality products and service and friendliness. Tony’s is one of my main sources for gardening information.) 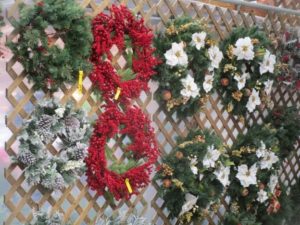 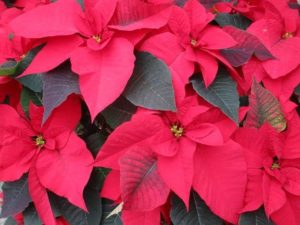 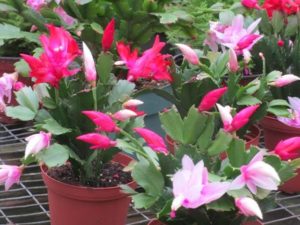 VOICES FROM AFIELD, PRISCILLA “PEPPY” BATH: Outdoorswoman Priscilla “Peppy” Bath checked in on hiking Jake’s Branch County Park in the Ocean County Pine Barrens: “I have never before been to the park and it is beautiful with many well-marked trails. We hiked the Blue (Trail) 4-mile hike. Alongside of the trail were many patches of trailing arbutus (“Epigaea repens”) and also turkey beard (“Xerophyllum asphodeloides”). Neither was in bloom, but I will go back in the spring and see the beautiful flowers.” More information on Jake’s Branch Park is available at http://www.oceancountyparks.org/ContentPage.aspx?ID=0694b294-986f-46e6-a679-d03ac775c176.

‘SNOW GEESE’: This time of year, we can expect to see snow geese, “Chen caerulescens,” down from the Arctic tundra – perhaps flying by, noticeable by their white color and black-tipped wings, or in farm fields. So far, I have not seen any, but hope to. (The species also has a dark version, or the “blue goose.”)

I took this photo of snow geese a few years ago on farmland along the Cranbury-Plainsboro boundary in Middlesex County. Here, their white bodies and black wingtips, which provide easy identification, are easily seen. 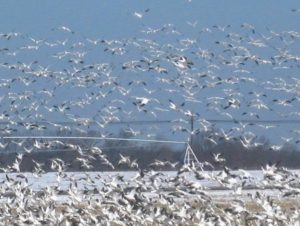 Another photograph of snow geese from a few years ago. Here, both in flight and in a cornfield.

TUNDRA SWANS: Tundra swans, “Cygnus buccinators” – New Jersey’s only native swan — are in the area. They, too, are cold-weather visitors from the Arctic tundra. My favorite place to see them is Whitesbog, in the main Pine Barrens and part of Brendan T. Byrne State Forest. Here is a story about Tundra Swan No. 207, spotted this season at Whitesbog, http://birdquiz.net/t207-2017/.

THE QUIET OF WINTER: In the winter, with many people staying inside in the warmth, the outdoors has a quiet solitude in many spots. Two places I visited during the week come to mind, the Delaware and Raritan Canal, where I visited the canal in Franklin Township, Somerset County, and the confluence of Crosswicks Creek and the Delaware River at Bordentown City, Burlington County. 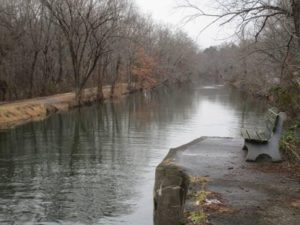 The Delaware and Raritan Canal at Griggstown in Franklin, Somerset County. 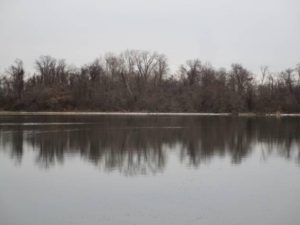 ATLANTIC OCEAN TEMPERATURES: The Atlantic Ocean temperature at Sandy Hook on December 17, Sunday, ranged from about 36 to 40 degrees. 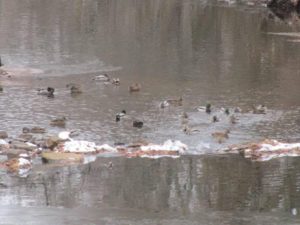 A familiar sound is the honking, then sighting, of Canada geese, “Branta Canadensis,” I captured this photograph from my backyard in Monroe, Middlesex County.

WINTER SOLSTICE: The Winter Solstice, or the day with the least amount of daylight, is December 21, Thursday. The sun rises about 7:17 a.m. and sets about 4:35 p.m. After, the amount of daylight grows until June 21, the “longest day” of the year. 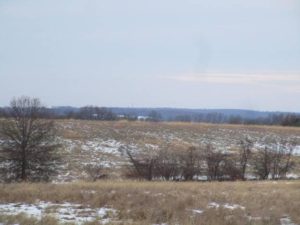 A view of Sourland Mountain, which is on the boundary of Somerset, Mercer, and Hunterdon counties, in the background across the farmland. This is as seen from the Princeton Ridge, Mercer County.

WEATHER: National Weather Service forecasting, along with other information, for the Jersey Midlands is at http://www.weather.gov/phi/.

UNEXPECTED WILDLIFE REFUGE SEEKS VOLUNTEERS: Our friends at the Unexpected Wildlife Refuge, just south of the Jersey Midlands in Gloucester County, seek volunteers to patrol the property to keep hunters off until at least the end of January. If interested, contact the refuge, http://unexpectedwildliferefuge.org/. 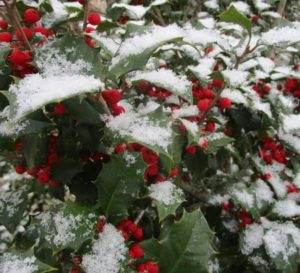 Snow clings to an American holly, “Ilex opaca,” in my backyard in Monroe, Middlesex County, from the December 9-10, Saturday-Sunday. This was the first snowfall of the season at my house.

Joe Sapia, 61, is a lifelong resident of Monroe — in South Middlesex County, where his maternal family settled more than 100 years ago. He is a Pine Barrens naturalist and a gardener of organic vegetables and fruit, along with zinnias and roses. He draws inspiration on the Pine Barrens around Helmetta from his mother, Sophie Onda Sapia, who lived her whole life in these Pines, and his Polish-immigrant grandmother, Annie Poznanski Onda. He gardens the same backyard plot as did his Grandma Annie and Italian-American father, Joe Sr. Both are inspirations for his food gardening. Ma inspires his rose gardening. Joe is a semi-retired print journalist of almost 40 years. His work also is at @JosephSapia on Twitter.com, along with Facebook.com on the Jersey Midlands page.