Note: The yard references are to my house in the section of Monroe between Helmetta and Jamesburg in South Middlesex County. My yard is in a Pine Barrens outlier on the Inner Coastal Plain, the soil is loamy, and my neighborhood is on the boundary of Gardening Zones 6b (cooler) and 7a (warmer). Notes and photographs are by the author and for the period covered, unless otherwise noted. 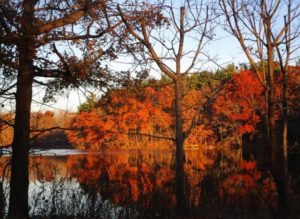 The foliage change of colors may be past its peak, but the colors continue to dazzle. Here, morning sunlight shines on a cove in a section of Farrington Lake on the East Brunswick-North Brunswick boundary in Middlesex County.

VOICES FROM AFIELD, DIANE LARSON, EAGLES: Diane Larson, who lives along Beaver Dam Creek in Brick, Ocean County, checked in: “Just wanted to share what happened (Sunday, November 26) morning. We noticed the seagulls abruptly flying, like they were spooked, then saw these two guys flying right above our house, and landed on the house across the lagoon from us!” Bald eagles, “Haliaeetus leucocephalus.” In New Jersey, the species is “endangered” as a breeder, or in immediate peril, and “threatened” otherwise, meaning if conditions continue, it could become “endangered.” “They flew in the area all morning, it was awesome to watch,” Diane said. 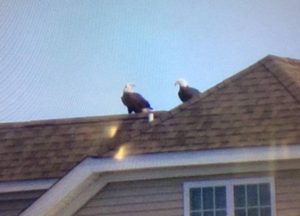 MORE EAGLES: Michael Franken has been reporting bald eagles from the boundary of Cranbury and Plainsboro in Middlesex County. 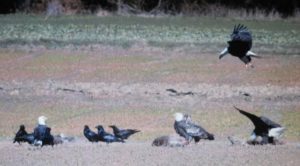 Bald eagles on a deer carcass along the Cranbury-Plainsboro boundary in Middlesex County. (Photo copyright 2017 by Michael Franken Photography)

VOICES FROM AFIELD, DIANE LARSON, NO. 2, JUNCOS: Diane Larson, who is the home horticulturist for the Monmouth County office of the Rutgers University Cooperative Extension, said, “I just went out to the back to check on the gardens behind our office. I heard unfamiliar bird sounds and followed them to see dozens of juncos (“Junco hyemalis,” or snowbird) on a tree back there. I then saw why they were there. They were all around the sweetgum tree (“Liquidambar styraciflua”) eating the seeds from the sweetgum balls.”

SNOWY OWLS: Reports are coming in of snowy owls, “Bubo scandiacus,” down from the Arctic. In recent years, I have heard two theories on the uptick of snowy owls in our area, both related to their food of choice, lemmings, “Dicrostonyx torquatus.” One is that there could be a shortage of lemmings, so the owls migrate farther than normal to find food. The other theory is there was an abundance of lemmings and because of this, owls prospered, having more offspring. A snowy owl story from nj.com: http://www.nj.com/ocean/index.ssf/2017/11/snowy_owl_explosion_expected_in_new_jersey_this_ye.html.

DRIVE-BY NATURALIST, STARLINGS: As I was walking through the Rutgers University campus in downtown New Brunswick, Middlesex County, I encountered a flock of starlings, flying and perching in trees. “For much of the year, they wheel through the sky and mob lawns in big, noisy flocks,” according to Cornell University’s All About Birds website. Starlings, “Sturnus vulgaris,” are non-native. “First brought to North America by (playwright William) Shakespeare enthusiasts in the 19th Century, European Starlings are now among the continent’s most numerous songbirds,” according to All About Birds. 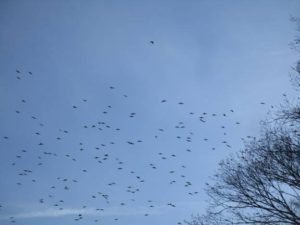 A flock of starlings at Rutgers University in New Brunswick, Middlesex County. 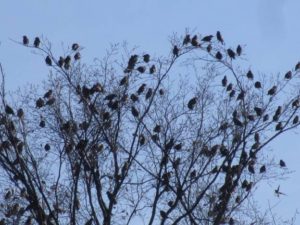 DRIVE-BY NATURALIST, SUNSET: As I was headed to the Rocky Hill area of Somerset County, I came across a beautiful sunset on the Monroe-South Brunswick boundary in Middlesex County. It was a wonderful orange sky, with the farmland I was photographing across providing “big sky” views. 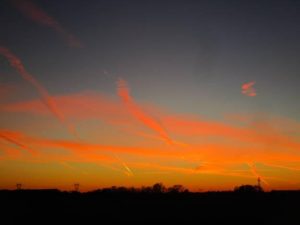 Sunset on the boundary of Monroe and South Brunswick, Middlesex County.

EARTHQUAKE: On Thursday, November 30, the rumble you may have felt was a 4.1 earthquake centered near Dover, Delaware. The Did-You-Feel-It response to the United States Geological Survey, https://earthquake.usgs.gov/earthquakes/eventpage/us1000bjkn#dyfi.

HURRICANE SEASON: The Atlantic Ocean hurricane season ended Thursday, November 30. During the season, which began June 1, there were 17 named storms of which 6 were major hurricanes, according to Channel 6 television in Philadelphia. “Three Category 4 hurricanes” – those with winds of 130 to 156 miles per hour — “made US landfall,” according to Channel 6. A primer on hurricanes from the National Hurricane Center, http://www.nhc.noaa.gov/aboutsshws.php.

‘LIVING SHORELINES’ PROPOSAL: Congressman Frank Pallone, who lives in Long Branch, is to introduce legislation creating the Living Shorelines Act, which would provide federal grant money for building up shorelines with plants and other natural materials. The idea is to prevent flooding and erosion, along with providing habitat, in a natural way. See Pallone’s op-ed in the Wednesday, November 29, Asbury Park Press, http://www.app.com/story/opinion/columnists/2017/11/29/living-shorelines-act-frank-pallone/108143866/. 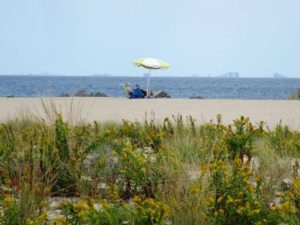 In this 2016 photograph, an Atlantic Ocean natural beach at Sandy Hook, Monmouth County, with the New York City area in the background.

CHRISTMAS TREES, SLIM PICKINGS AND HIGHER PRICES: We were just talking about how fewer trees were planted because of the Great Recession about 10 years ago. And, 10 years later, those trees are ready – in smaller numbers and, in turn, higher prices. Here is a New York Times story on the matter, https://www.nytimes.com/2017/11/30/business/christmas-tree-shortage-recession.html.

DEER RUT: A 63-year-old Franklin, Somerset County, died from injuries suffered in a motor-vehicle accident in his hometown that happened during the ongoing mating season, or rut, of deer, “Odocoileus virginianus.” Be careful while driving, especially during the rut, which will likely extend into about mid-December.

FULL MOON: The upcoming full moon — the Full Long Night Moon on the December 3-4, Sunday-Monday overnight — will be 2017’s only full “super moon,” that is, when the full moon comes close to the Earth, or 222,443 miles away. The closest will be at 4 a.m. Monday, December 4, when the moon will appear “about 7 percent larger and 16 percent brighter than usual,” according to the National Geographic. 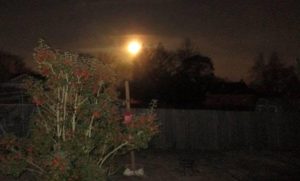 The near-full moon around 4 a.m. from my backyard in Monroe, Middlesex County.

OCEAN TEMPERATURE: The Atlantic Ocean temperature at Sandy Hook was about 48 degrees over the Dec. 2-3 weekend. 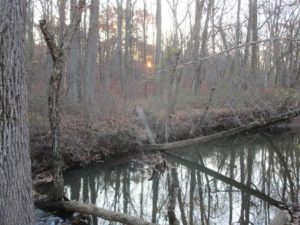 Joe Sapia, 61, is a lifelong resident of Monroe — in South Middlesex County, where his maternal family settled more than 100 years ago. He is a Pine Barrens naturalist and a gardener of organic vegetables and fruit, along with zinnias and roses.  He draws inspiration on the Pine Barrens around Helmetta from his mother, Sophie Onda Sapia, who lived her whole life in these Pines, and his Polish-immigrant grandmother, Annie Poznanski Onda. He gardens the same backyard plot as did his Grandma Annie and Italian-American father, Joe Sr. Both are inspirations for his food gardening. Ma inspires his rose gardening. Joe is a semi-retired print journalist of almost 40 years. His work also is at @JosephSapia on Twitter.com, along with Facebook.com on the Jersey Midlands page.