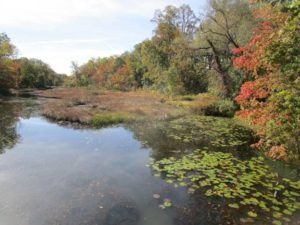 The fall foliage colors on Lawrence Brook in the Deans section of South Brunswick, Middlesex County.

FALL FOLIAGE: The peak of the colors is a little late this year, but this coming week should be very nice for viewing. The combination of fallen leaves and rain can make slippery driving conditions. So, be careful driving.

DEER RUT: Speaking of being careful when driving, look out for deer, “Odocoileus virginianus,” because the rut, or mating season, is on – meaning sex-crazed deer are running around. Normally, bucks stay out of sight, while it is common to see does and their brood. But over the last few weeks, I have noticed movement by bucks. During this week, I have seen a buck along the woods edge at Helmetta and in a driveway in a wooded area of East Brunswick, both in Middlesex County. If dividing the rut into three chapters of one, bucks challenging other bucks and chasing does, two, mating, and three, a wind-down, I would say we are in stage one on the cusp of stage two. The rut will extend to about mid-December. 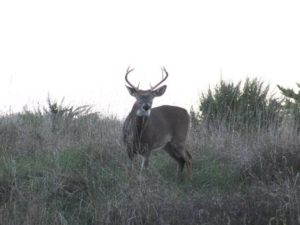 I shot this 7-point buck (with a camera) in 2015, October, just north of the Jersey Midlands near the Metropark railroad station area of Woodbridge, Middlesex County.

WINTER IS COMING: I have been gazing at the constellation Orion, easily identified in the night sky by its belt of three stars. When we can see Orion, it means we are in the colder weather part of the year. And cold weather means being on the lookout for snow. On 2008, October 28, it snowed in the Helmetta area of Middlesex County, but there was little, if any, accumulation. (The average snowfall in the New Brunswick, Middlesex County, area, for example, is 25.8 inches.) 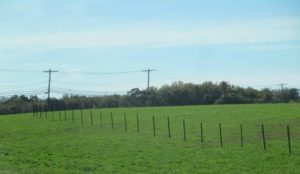 A sign of winter: fencing on farmland to prevent drifting snow. Here on a farm in Upper Freehold, Monmouth County, stakes for snowfencing are in place. 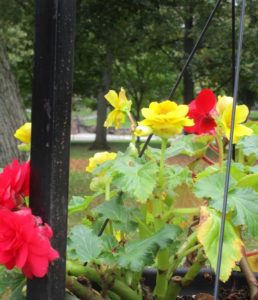 A little bit of lingering warm weather, a little taste of future cold weather — that is this time of year. Here, flowers in bloom on Voorhees Mall at Rutgers University—New Brunswick, Middlesex County.

“SNOWBIRDS”: Has anyone seen the first “snowbird,” or junco, “Junco hyemalis,” of the cold-weather season? I have not noticed any yet, but likely will see one soon, because I normally see the first one of the season around Halloween. 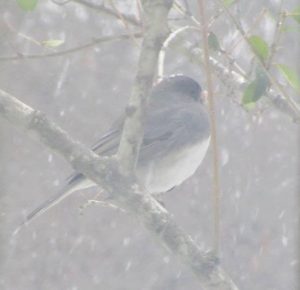 A “snowbird” in my yard in March of this year. They are a cold-weather bird in the Jersey Midlands. Normally, I begin seeing them around Halloween.

BIRD-FEEDING: For the first time in years, I did not feed birds this summer. Although I love zoning out and watching birds at my backyard feeder, I decided to put the birds visiting my yard to work, that is, eating insects – and from my end, saving money on birdseed. But this week, with food gardening pretty much over for the year and cold weather scaring off insects, I resumed feeding. It seemed to take a few days to attract birds to the feeder, but they are now there – blue jay, “Cyanocitta cristata”; chickadee, probably “Poecile carolinensis”; titmouse, “Baeolophus bicolor”; and nuthatch, “Sitta carolinensis.” And I await more species. 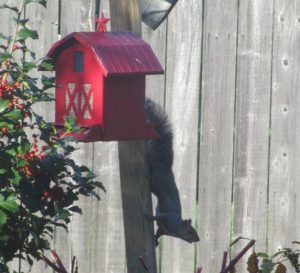 A gray squirrel, “Sciurus carolinensis,” testing the squirrel guard on my backyard birdfeeder. I will have to keep an eye on it to see who wins, feeder or squirrel. 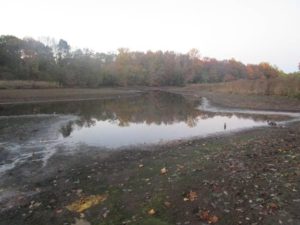 Middlesex County’s Farrington Lake is low. Here, looking from the South Brunswick-East Brunswick boundary across the lake to North Brunswick.

THE WIND: On the morning of Tuesday, October 24, I went to the Helmetta Post Office, where I am third generation with Box 275, to pick up my mail. There, I noticed American flags at the Fire Department and at the historic Avon Inn snapping in the wind. Judging by the flags, the wind was blowing up to 8 to 12 miles per hour. Wind speed can be judged by its impact on flags, trees, and smoke, for example.

An American flag snaps to the wind at Helmetta’s historic Avon Inn, now a private residence. It dates back as a circa late 1800s-early 1900s inn positioned near a railroad station. (Think of the hotel on the 1963-1970 television sitcom “Petticoat Junction.”) 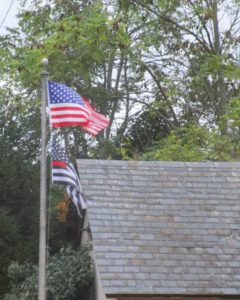 Another American flag in the wind at the Helmetta firehouse and old George W. Helme Snuff Mill pumphouse, which sits on the mill race leading from the former mill to Manalapan Brook. 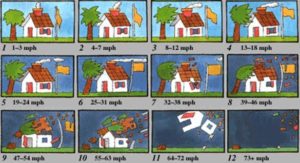 CLOUDS OVER NEW BRUNSWICK: During a break from my work in the Plangere Writing Center at Rutgers University’s Murray Hall in New Brunswick, Middlesex County, I looked out a window and noticed the clouds over the Johnson and Johnson pharmaceutical company headquarters along the Raritan River. Again, a beautiful display by Mother Nature:

Clouds over Johnson and Johnson pharmaceuticals headquarters along the Raritan River in New Brunswick, Middlesex County. Photograph from Murray Hall on the Rutgers University downtown campus. 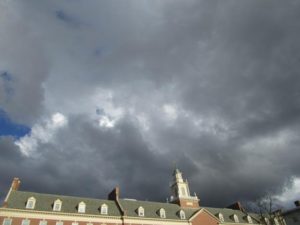 Another photo of clouds over the J&J building in New Brunswick, Middlesex County.

LOST MAN IN THE PINE BARRENS AROUND HELMETTA: A 68-year-old was rescued after becoming lost and weakened during a walk in an East Brunswick, Middlesex County, section of the Jamesburg Park Conservation Area. The man apparently was not physically injured. But he had suffered a stroke about 10 years ago and has physical, cognitive, and speech limitations, according to family friends and officials. Rescuers first had to locate the man. Then, those rescuers were lost and had to be guided out of the woods. A State Police helicopter was called in to light up the woods and find the victim and his rescuers. The helicopter, then, guided them out before it had to leave because it was low on fuel. The rescue took about four hours until about 9:30 p.m. Because of the swampy and woodsy terrain, the man had to be hand-carried out on a stretcher. The Jamesburg Conservation Area, which is owned by Middlesex County Parks and Recreation, is about 1,400 acres of woods, swamp, waterways, and bodies of water, including Helmetta Pond.

HELMETTA POND, GOOD FOR THE SOUL: Ralph “Rusty” Richards, a mentor of mine in the Pine Barrens around Helmetta, Middlesex County, and I were talking at Helmetta Pond when this unfamiliar woman walked by and told us she was going to wet her feet in the Pond. It sure looked good for the soul. 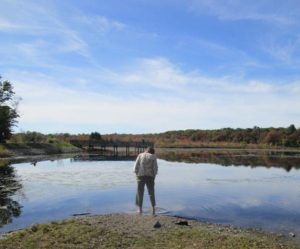 DRIVE-BY FARM SCENES: In my travels, I photographed various farm scenes in South Brunswick and Monroe, both in Middlesex County, and Upper Freehold, Monmouth County. 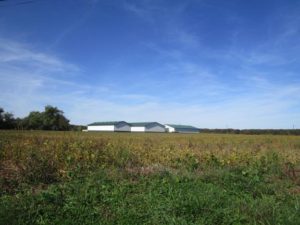 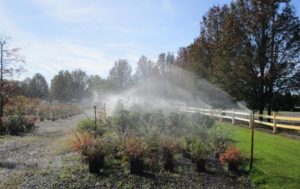 A combine works a field in Upper Freehold, Monmouth County. 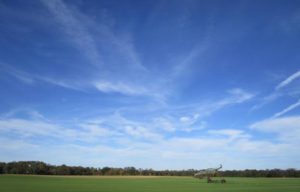 OCEAN TEMPERATURES: Atlantic Ocean temperatures on the New Jersey coast were about 61 degrees to 64 degrees on the October 28-29 weekend.
CHANGE THE CLOCKS: We switch from Daylight Savings Time to Standard Time November 5, Sunday, at 2 a.m., the clocks moving back to 1 a.m.
SUNRISE/SUNSET: For October 29, Sunday, to November 4, Saturday, the sun will rise about 7:25 to 7:30 a.m. and set about 5:55 p.m. For November 5, Sunday, to November 11, Saturday, the sun will rise about 6:35 a.m. set about 4:45 p.m.
WEATHER: The National Weather Service forecasting station for the area is at http://www.weather.gov/phi/.
THE NIGHT SKY: The next full moon is the Frost Moon on the Friday-Saturday, November 3-4, overnight.
“WAR OF THE WORLDS” BROADCAST: When you look into the night sky, something may be looking back… On 1938, October 30, Mischief Night, the Jersey Midlands were invaded by Martians in Orson Welles and the Mercury Theatre on the Air’s adaptation of H.G. Wells’s “The War of the Worlds.” The broadcast, https://www.youtube.com/watch?v=9q7tN7MhQ4I.
UPCOMING: October 29, Sunday, 1:30 p.m., from Clean Ocean Action: “There will be a commemoration of lives, homes and businesses lost as a result of (2012’s) Superstorm Sandy. There will be a rally followed by brief comments from various elected officials and the major candidates for Governor. Attendees will line the Asbury Park boardwalk from end to end demonstrating the urgent need to address climate change. The call to action will be captured by aerial photography as attendees hold hands across the boardwalk. For more information or to get involved, contact Ed Potosnak, NJ League of Conservation Voters at ed.potosnak@njlcv.org. RSVP today at njlcvef.org/sandy.”

Joe Sapia, 60, is a lifelong resident of Monroe in South Middlesex County. He is a Pine Barrens naturalist and a gardener of organic vegetables and fruit, along with zinnias and roses. He draws inspiration on the Pine Barrens around Helmetta from his mother, Sophie Onda Sapia, who lived her whole life in these Pines, and his Polish-immigrant grandmother, Annie Poznanski Onda. He gardens the same backyard plot as did his Italian-American father, Joe Sr., and Grandma Annie. Both are inspirations for his food gardening. Ma inspires his rose gardening. Joe’s work also is at @JosephSapia on Twitter.com, along with Facebook.com on the Jersey Midlands page.