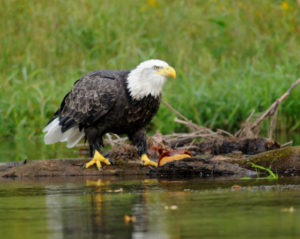 The food chain is not a one way street, as a turtle whose kin may feed on baby ducks, gets picked on by a bald eagle

It is unthinkable to imagine a restaurant where the diners are often listed as menu items. Though when seated at nature’s dinner table, the catch of the day takes on a whole new meaning as predators and prey freely alternate position. The dietary choices are also a surprise as the variety of delectable meals is often at odds with expectations.

Sorting through my library of photos, I was perplexed trying to categorize some images showing two species in close contact. Obviously notable was the reversal of who was eating who.

The first image which prompted these thoughts was captured as I launched my canoe. Here was a very young painted water snake, brilliant colored markings, with a fish sticking out its mouth. Comparing the size of the snake to the fish, I wondered if the snake ‘bit off more than he could chew’, as they say. The fish was wider than the snake and it didn’t look like much progress was being made in the attempt to swallow it. I couldn’t identify the species of fish but thought it a moment of karma as small mouth bass which inhabit the river are well known to forage on anything that swims or crawls in the waters of the south branch. A small snake would hardly be ignored by a hungry bass. 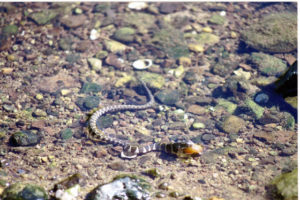 Another image shows a larger painted water snake suspended on o vertical river bank holding onto the tail of a gold colored catfish. As the snake was in an awkward position and didn’t want to go into the water, it was a standoff with the advantage going to the snake. The fish would struggle and then lay still. Eventually the fish broke free. I then remembered a series of images documenting another struggle where a snapping turtle grabbed a painted water snake by the tail. As I paddled along, I saw a water snake swimming across the river and as it neared the opposite bank it suddenly reared up and began to thrash about. Mystery solved as a snapping turtle soon surfaced holding on tight, as the snake now alternated struggling and lying still. As I drifted closer, the turtle was intimidated into releasing its grip and the snake swam off. 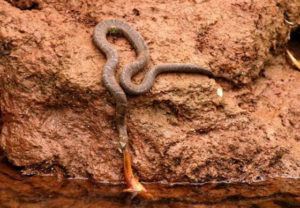 A painted water snake has a catfish by the tail. The snake is barely holding on to the vertical bank , using a tuft of grass to secure its precarious position. the catfish would struggle mighily and then rest. After several tries the catfish appeared dead and lay still for quite some time. Suddenly the catfish came to life and broke free. Again, the scene was captured from a canoe. 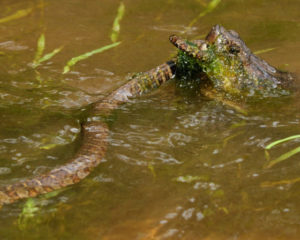 A painted water snakes has the tables turned on it as a snapping turtle reached up to grab the snake swimming across the river.

Turtles are not immune from the proverbial soup bowl as they are prey to many birds and animals that share the same habitat. Even large water snakes will easily swallow a turtle hatchling seeking cover in the water, as will great blue herons, mink, fox, skunk, raccoon and birds of prey.

In a twist of fate, the turtle that killed baby ducks in a farm pond yesterday could very well be on a larger bird’s menu today.

Such was the case when I spotted a bald eagle standing on a log near shore, intently pulling and tearing away at what was probably a deer carcass or white sucker. The eagle would occasionally look up and certainly it saw me from two hundred yards away, apparently not at all intimidated. As I closed the distance, a bright yellow object was clearly visible and the focus of the eagle’s rapt attention. I began to take photos, drifting ever closer and as I started to pass the eagle, it flew off. It was then I realized the eagle was dining on a painted turtle!

Across the land where rivers flow, the lines between predator and prey begin to blur. Don’t be surprised when a squirrel is seen carry a baby crow or a muskrat is swimming underwater holding a baby blue jay or a blue jay is flying off with a dead vole. If you can’t imagine it, it is happening somewhere along our wild rivers. 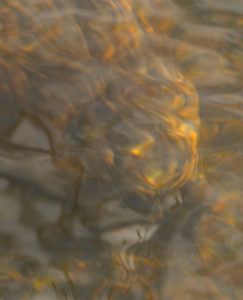 Muskrat with a bluejay swims into its den’s underwater entrance. Mystery for sure.