Article and photos by Joe Sapia (except as noted) 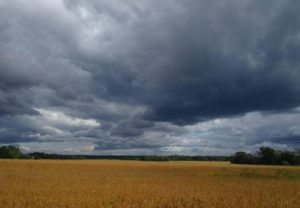 Gray clouds over Monroe farmland, looking toward the Jamesburg Park Conservation Area. Beautiful cloudy skies have presented themselves in recent years over my hometown of Monroe.

FALL HAS ARRIVED: Despite the summer-like temperatures the Jersey Midlands have been experiencing, fall is here. The calendar proclaims the beginning of fall at the September equinox – this year, September 22, when the day’s light and dark are generally equal. However, I regard fall beginning September 1 and running through October and November. 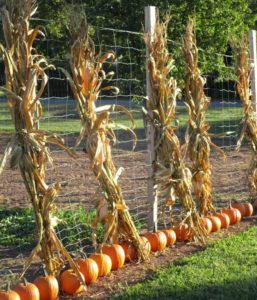 A fall scene at Griggstown Farm in Franklin, Somerset County.

“The South Brunswick Police Department is reminding motorists to be alert for increased deer activity over the next six weeks. This is typically when we see an increase in car crashes involving deer. The deer can unexpectedly dart onto roads so motorists need to use extra caution. “Motorists are urged to be especially attentive and cautious during morning and evening commutes when visibility may be poor. Deer are involved in thousands of collisions annually in New Jersey, with as many as half coming during the fall mating season, or rutting season…. An adult male deer can weigh 150 pounds or more.
“In the past month there have been a half dozen crashes involving deer in South Brunswick. In past years the majority of crashes have taken place over the next 6 weeks.

“…Deer are most active in the very early morning and around sunset, when visibility conditions can be very difficult. Using caution while driving will become even more important when Daylight Saving Time ends November 6, causing commutes to align with periods when deer are most active. For motorists, low levels of light and sun glare can make it very difficult to see deer that are about to cross the road. Moreover, multiple deer may cross the road at any given moment, usually in a single file.

The following tips can help motorists stay safe during from deer crashes:

-If you see a deer, slow down and pay attention to possible sudden movement. If the deer doesn’t move, don’t go around it. Wait for the deer to pass and the road is clear.
-Pay attention to ‘Deer Crossing’ signs. Slow down when traveling through areas known to have a high concentration of deer so you will have ample time to stop if necessary. If you are traveling after dark, use high beams when there is no oncoming traffic. High beams will be reflected by the eyes of deer on or near roads. If you see one deer, be on guard: others may be in the area. Deer typically move in family groups at this time of year and cross roads single-file. Don’t tailgate. Remember: the driver in front of you might have to stop suddenly to avoid hitting a deer.

-Always wear a seatbelt, as required by law. Drive at a safe and sensible speed, considering weather, available lighting, traffic, curves and other road conditions.

-If a collision appears inevitable, do not swerve to avoid impact. The deer may counter-maneuver suddenly. Brake appropriately, but stay in your lane. Collisions are more likely to become fatal when a driver swerves to avoid a deer and instead collides with oncoming traffic or a fixed structure along the road.

-Obey the state’s hands-free device law or, better yet, avoid any distractions by refraining from using cellular devices while driving. 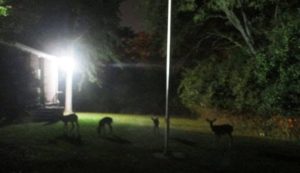 I encountered these deer near Rutgers University–Douglass College in New Brunswick, Middlesex County. These are city deer, allowing me to get within 30 or so feet of them.

WEARING BLAZE ORANGE: With the popular deer-hunting season underway, it is probably a good time to wear blaze orange in the woods. Actually, a few years ago, I started wearing blaze orange on my knapsack year-round, because it is hard to keep track of hunting. During the last deer-hunting season, I walked under a tree-stand with a hunter, never seeing him until he spoke to me. Fortunately, I wore blaze orange. (The incident showed me, no matter a life spent in the woods, I let down my awareness.) 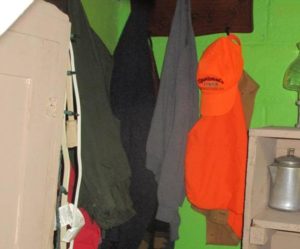 BALDFACED HORNET NESTS: As we transition from the warm weather season to the cold, baldface hornets, “Dolichovespula maculate,” will abandon their nests. The abandoned nest is not a threat and may make a folksy bringing-of-the-outdoors-inside ornament. I have two hanging, with another waiting to be hung, in my cellar “cabin” area. Scope your nest now, but wait for colder weather to make sure it is fully abandoned. (Even in season, these nests are not a threat, if far-enough away from human activity. See this Pennsylvania State University Extension factsheet, http://ento.psu.edu/extension/factsheets/baldfaced-hornet.) 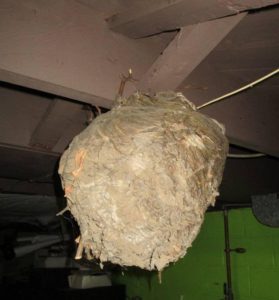 A baldfaced wasp nest on display in my cellar.

MONARCH BUTTERFLIES: Last week, I mentioned monarch butterflies, “Danaus plexippus,” would be heading on their southern migration to either Florida or, more likely, Mexico. The monarchs we see now are a “super generation,” the great-grandchildren of last fall’s migration and these making the complete trip south, if they survive. This week, I was able to photograph one in my garden as it visited the zinnias. 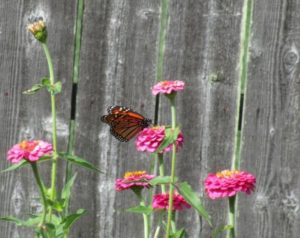 A monarch butterfly on the zinnias in my garden. If all goes right, this butterfly will migrate to at least Florida or, more likely, Mexico. Good luck!

ZINNIAS AND LETTUCE: This week, my zinnias went to Teddy’s luncheonette in Cranbury, Middlesex County, and the Hightstown Diner in Hightstown, Mercer County. The fall lettuce crop in my garden is growing nicely. 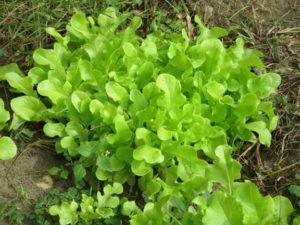 The fall lettuce crop in my garden.

GARDEN VOICES: Paul Migut, who gardens in South River, Middlesex County, checked in: “(I) pulled out all Rutgers and yellow tomatoes. (I) still have two grape/cherry tomatoes and two bush beans. And, of course, the ‘surprise’ turnips still growing. Enjoy the Fall season.” 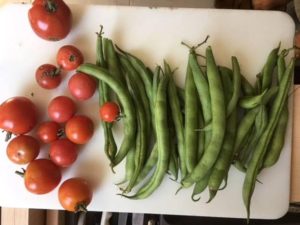 BEAUTIFUL CLOUDS: The beautiful cloud formations continue. This week, among the places I photographed them was “Jamesburg Lake” (properly “Lake Manalapan”) on the Jamesburg-Monroe boundary, Middlesex County. 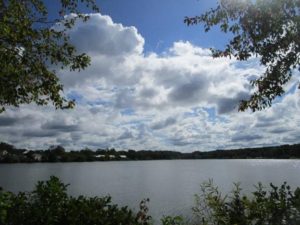 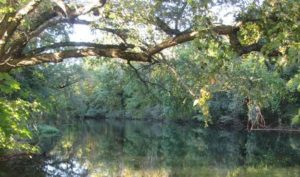 The Delaware and Raritan Canal on the boundary of Rocky Hill and Franklin, Somerset County.

OCEAN TEMPERATURES: Atlantic Ocean temperatures on the New Jersey coast were about 68 degrees to 70 degrees during the weekend of September 30-October 1.

THE NIGHT SKY: The next full moon is the Full Harvest Moon Thursday, October 5.

UPCOMING: Another “Rally for the Navesink” meeting is scheduled for Tuesday, October 3, 5:30 p.m., at the Monmouth Boat Club, 31 Union Street, Red Bank. The Rallies are an effort of environmental groups, the community, and municipal, Monmouth County, and state governments to promote improvement of the Navesink River in Monmouth County. The river suffers from high fecal bacteria counts and depleted oxygen levels. More information on the Rally is available from Clean Ocean Action, telephone 732-872-0111, website www.cleanoceanaction.org. 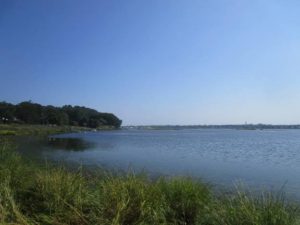 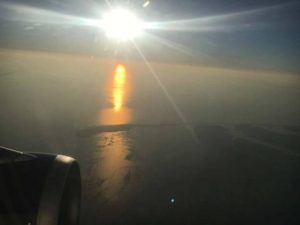 The recent photograph shows Sandy Hook, where the Atlantic Ocean and Raritan Bay meet, from an airplane flight leaving LaGuardia Airport in New York City. Humans, how small we are! (Photograph copyright 2017 by Dan Mulligan, a Long Branch, Monmouth County, kid who, now, lives in Cranbury, where he is on the Township Committee and has served as mayor.)