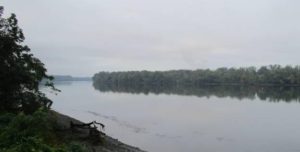 Dawn on the Delaware River, looking downstream from Hamilton, Mercer County, to the other side of the river and Bucks County, Pennsylvania.

ABBOTT MARSHLANDS: The Abbott Marshlands are about 3,000 acres, about 1,300 wetlands and 1,700 uplands, along the Delaware River on the boundary of Burlington and Mercer counties in the Bordentown-Trenton area. An interesting point of the marsh is that it is both freshwater and tidal. While Delaware River saltwater going inland ends between the Delaware Memorial Bridge and Philadelphia, the tidal effect continues for miles upstream to the Marshlands. The Marshlands also are known as the Trenton Marsh and the Hamilton Marsh. More information is at http://abbottmarshlands.org/. 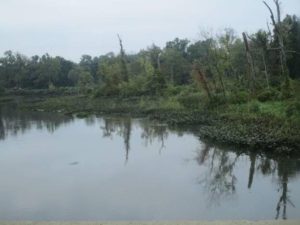 MONARCH BUTTERFLIES: Watch for monarch butterflies, “Danaus plexippus,” on their southern migration, to either Florida or, more likely, Mexico. This “super generation” are the great-grandchildren of last fall’s migrators and will make the complete migration. However, next year, they will begin northward, but will only make it so far, requiring three breedings to complete the journey north. Then, those great-grandchildren will become a “super generation,” making the entire journey south. 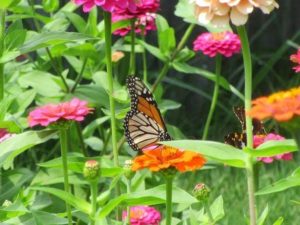 A monarch butterfly in my garden in August.

DRIVE-BY NATURALIST, BLACK VULTURES: I was driving to Princeton, Mercer County, to meet the lovely Pamela for breakfast and came across quite a scene on Route 27 in South Brunswick, Middlesex County – dozens of black vultures, “Coragyps atratus,” feeding on a dead deer. (As I mentioned last month, I do not recall seeing a black vulture locally until probably the 1990s. They are a southern species that has moved north.) Remember, nature is all around us, just keep an eye out for it.

DRIVE-BY NATURALIST, CHESTNUT TREES: As I was driving through the Pine Barrens around Helmetta, I noticed a Middlesex County Parks and Recreation pickup at the Jamesburg Park Conservation Area. I had to talk to naturalist Eric Gehring about a volunteer project, so I turned around and pulled over. Eric was on a mission with Les Nichols of the American Chestnut Foundation, looking for chestnut trees, “Castanea dentata,” in the Conservation Area. Since around 1900, the American chestnut has been plagued by a non-native and extremely invasive and potent fungal blight, “Cryphonectria parasitica,” – estimated to have crippled up to 4 billion chestnuts initially. American Chestnut blight affects the tree upward from where it infects it. The tree, then, is able to sprout again from roots, only to have those shoots, except for rare cases, infected. The Foundation seeks good specimens, hoping to create resistance in future chestnuts. Eric asked if I knew of chestnuts growing in these woods. Yes, at Swing Hill (which Eric already knew about) and at Big Tree. Into the woods, we headed – on my part unexpectedly, but I would rather walk the woods my family has walked for more than 100 years than do chores around the house – looking for specimens that may produce sought-after seeds in the future. 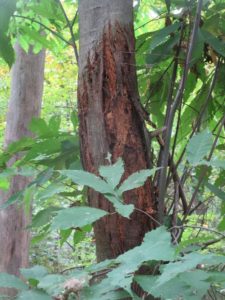 An American chestnut, in the Pine Barrens around Helmetta, infected with the fungal blight. 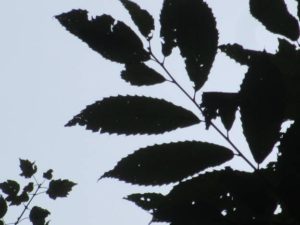 STINK BUGS: I had noticed one or two brown marmorated stink bugs, “Halyomorpha halys,” outside the house. This is an Asian species, apparently introduced accidentally in the Allentown, Pennsylvania, area in 1996. This week, I found one in the house on a blind in my living room — perhaps just the beginning of an infiltration for their overwintering. As a Rutgers University fact sheet says, “They enter houses through cracks in windows and the foundation and may be seen in large numbers during September and October.” If you go after one and, say, crush it, it will release an earthy odor. So, it is a nuisance, not a damaging bug to the house. However, it is a serious threat to crops. More information is available at https://njaes.rutgers.edu/stinkbug/. (As for crickets in the house, my $45,000 cricket deterrent project – that is the remodeling with the side benefit of keeping crickets out of the house – seems to be working. So far, only 8 crickets in the cellar and 2 in the living section of the house. A cacophony of crickets is beautiful music. A single cricket rubbing its legs in the wee hours like the fingernail scratching of a blackboard. While cleaning the garage, I may have discovered their last main intrusion route into the living section – through a crack/opening between garage floor and foundation.) 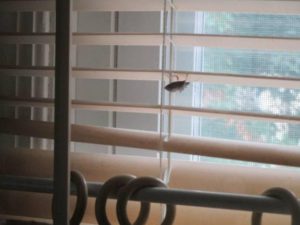 BIRD FEEDING: This is the first summer in years I have not gone all out feeding the birds in my yard. I miss watching them, but I saved quite a bit of money (because I use only sunflower hearts or kernels) and tried something new, letting the birds eat insects, serving as a natural pesticide. But the bird-feeder is back up and the birds are slowly discovering it. I am looking forward to beginning my day watching birds feed. 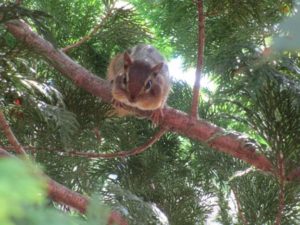 A chipmunk, “Tamias striatus,” in the yard.

FERRIS FARMS: Now that I am feeding the birds in my yard again, I stopped by my regular bird food supplier, Ferris Farms in East Brunswick, Middlesex County. I recall visiting Ferris as a youngster with my family. Mike Rutkowski and Tony Riccobono have always been friendly and helpful when I have asked gardening questions. See http://www.ferrisfarms.org/. 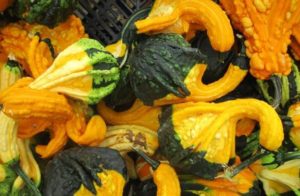 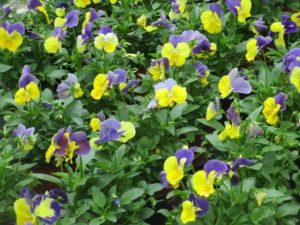 KITCHEN TABLE: The flower display on my kitchen table gets better and better. One, the Knock Out roses continued flowering. Two, the zinnias also continued blooming. Three, I learned the display looked better with the more zinnias that I used. Lastly, the gourds were the same as before but they seemed to be yellowing in color, making them more autumn-like. Of course, the antique, porcelain-top table adds to the country-ness of the display. On the down side, this rose bloom seems on its way out. (I have something up my sleeve, though: Grandma Annie Onda’s old kitchen table, with porcelain top and more ornate build, stands ready in my cellar to be moved upstairs to the kitchen.)

ZINNIAS IN THE GARDEN: This week, my zinnias were distributed to the Helmetta Post Office, the lovely Pamela’s, and Jamesburg Dental Care (where I had my first dental appointment 55 years ago under Dr. Lew Goldstein). Butterflies continue to visit my zinnia patch. 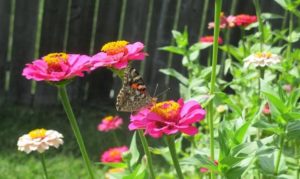 A painted lady, “Vanessa cardui,” in the zinnia patch.

HURRICANE JOSE, THE GOOD: Jose’s effects brought out sightseers to look at the roughness of the ocean. And I saw parasailing surfers taking advantage of the winds at the Atlantic Ocean at Sea Bright, Monmouth County. 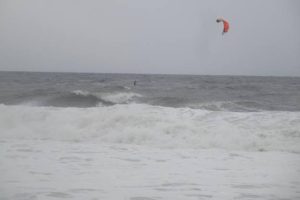 A parasailing surfer in the Atlantic Ocean at Sea Bright, Monmouth County.

WEEDS IN THE YARD: When I see some kind of vegetation popping up in the yard, I let it grow to observe it. So, year after year, pokeweed, “Phytolacca americana,” pops up, one plant along my driveway, another in my garden. Here is an interesting article on this complicated plant, http://nadiasyard.com/our-native-plants/american-pokeweed/. 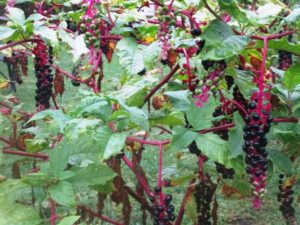 Pokeweed in the garden.

MONMOUTH CONSERVATION FOUNDATION: A shout-out to the Monmouth Conservation Foundation, a not-for-profit land preservation group in Monmouth County, as it celebrates its 40th anniversary. Over the 40 years, it has helped save more than 22,000 acres of open space. (The Foundation recently contracted me to write two articles – one on the group’s origin and another on Monmouth County wildlife — for one of its upcoming publications.)

OCEAN TEMPERATURES: Atlantic Ocean temperatures on the New Jersey coast were about 69 degrees to 74 degrees on the weekend of September 23-24. 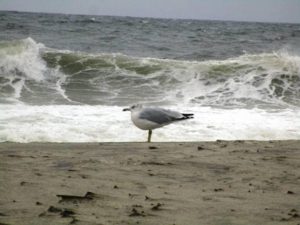 A gull at the Atlantic Ocean beach at Sea Bright, Monmouth County.

THE NIGHT SKY: The next full moon is the Full Harvest Moon October 5, Thursday. 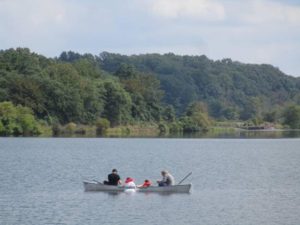