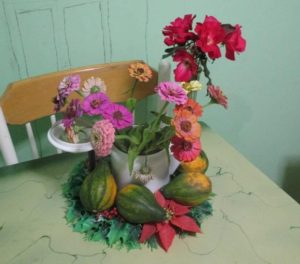 My kitchen table display gets better and better: Gourds, which mysteriously appeared in the garden, are added to the display of zinnias and Knock Out roses on the antique porcelain-top table.

BIG SKY COUNTRY, EMLEY’S HILL: I was driving through one of my favorite places in the Midlands, rural Western Monmouth County. I stopped at Upper Freehold’s Emley’s Hill, part of the cuesta geological formation that divides the Outer and Inner Coastal Plains. Generally, east of this hilly formation drains directly to the Atlantic Ocean, while west of the cuesta drains to the Raritan River. Emley Hill, though, is on a spur of the cuesta dividing the drainages of the Raritan River and the Delaware River. Because it is a hilly rural area at about 140 feet above sea level with lower surrounding farmland, there are beautiful big-sky views. Emley’s Hill is at the intersection of Emley’s Hill Road and Burlington Path Road. 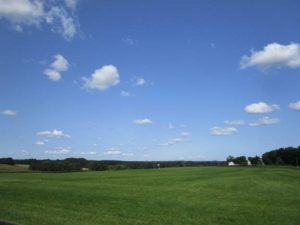 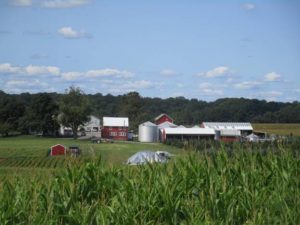 Looking north from Emley’s Hill at the Bullock Farms, http://www.bullockfarms.com/.

WILD OUTDOOR EXPO: The New Jersey Wild Outdoor Expo is an annual event, held at the Colliers Mills Wildlife Management Area in Ocean County. It includes information on environmental issues and parks, hunting, fishing, trapping, other recreational use of the outdoors, and so on.

This year’s expo, held on Saturday and Sunday, September 9 and 10, was sponsored by the state Department of Environmental Protection’s Division of Fish and Wildlife, Division of Parks and Forestry, and Forestry Services, along with the Conserve Wildlife Foundation of New Jersey.

Colliers Mills WMA is the almost 13,000 acres of open space — Pine Barrens forest, fields, waterways, and bodies of water — behind the Six Flags/Great Adventure amusement area. Outside of New Jersey, WMAs are referred to as “game lands.” In New Jersey, WMAs are shared by hunters and other recreational outdoors people.

Red-tailed hawk, “Buteo jamaicensis,” on display at the Expo. Note the reddish tail giving the hawk its name. Red tails are commonly seen, soaring above, or commonly heard, calling in a wheezy-sound way. 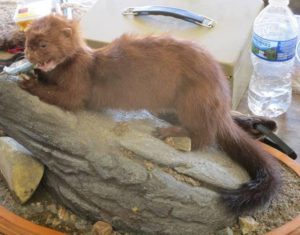 A mounted mink, “Mustela vison.” They are around, but the only two I have seen were both roadkills in recent years in the Pine Barrens around Helmetta. 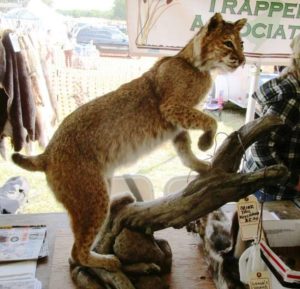 A mounted bobcat, “Lynx rufus.” I describe them as having a dog-like body with a cat’s head. I would love to see one in the wild. The state lists the bobcat as “endangered,” or in immediate peril of surviving. 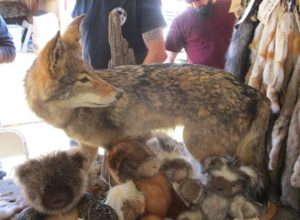 A mounted coyote, “Canis latrans.” Note the dog-like body, but pointy fox-like nose and ears. From 2014 to 2016, I worked an overnight shift near the Metropark train station in Woodbridge, Middlesex County, and I would occasionally see a coyote. One night, an ambulance was on the other side of the woods, yipping its siren. The coyotes started up, yipping away. Smart animals – I once read a suggestion if coyotes had opposing toes, they probably would run the world.

Brochures from the Expo.

FALLING ACORNS: I was driving one of the paved roads through the Jamesburg Park Conservation Area in the Pine Barrens around Helmetta and came across outdoorsman Art Utter, who lives nearby in Spotswood. Art was gathering acorns to use as hunting bait around his deerstand. While we were talking, I was listening to and dodging falling acorns. Earlier, Art got conked on the head by one and it drew blood. These things looked massive. Some might say these acorns suggest a severe winter ahead, with the acorns providing animals with food. I do not think it is a good predictor of anything. The only thing I got out of it was that it seemed as though acorns were falling steadily and they were big. 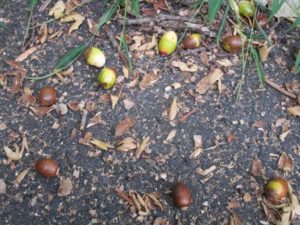 Acorns litter a road in the Jamesburg Park Conservation Area in the Pine Barrens around Helmetta.

IN THE GARDEN: I got tired of looking at the tangle of cucumber and cantaloupe plants that did not produce one usable item this year. So, I mowed them down, along with the tomatillos and gourds, both of which I did not plant. So, now, I look forward to fall lettuce, which is growing nicely, and carrots. 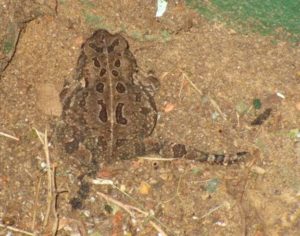 I came across this toad, genus “Anaxyrus,” while cutting the lawn.

THE FLOWERING YARD: The zinnias and Knock Out roses continue to bloom, although the zinnias may have slowed down – perhaps because of powdery mildew and leaf spot. But the Knock Outs seem to be flourishing. 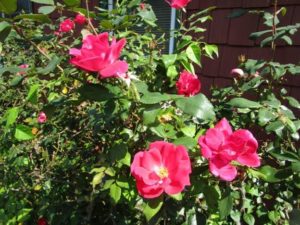 Knock Out roses continue to bloom nicely – even flourishing.

OUT-OF-SEASON FLOWERING: Occasionally, plants bloom out of season. In the past, I remember seeing sheep laurel, “Kalmia angustifolia,” blooming in the fall in the Pine Barrens around Helmetta, when its normal bloom is May and June. Maybe an out-of-season bloom was caused by temperatures and sunlight replicating normal bloom times. Whatever the reason, the flowering quince bush in my yard was actually flowering. Normal flowering would be in the spring. 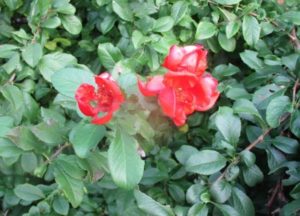 Flowering quince blooming out of season.

BIZARRE EXPERIENCE IN THE YARD: The flowering quince was unusual, but not bizarre. The bizarre experience happened a day earlier, when I was cutting the front yard grass. First, I notice a rabbit, “Sylvilagus floridanus,” watching me from a few feet away on the other side of the hedges. As I have mentioned, if I go about my own business, the rabbits and butterflies allow me to get close. As I was cutting the grass along the street’s edge, I noticed something embedded in the ground where I had just mowed – a 20-gauge, loaded shotgun shell! If I cut that open when I was mowing, I could have sprayed hundreds of pellets. Fortunately, it was intact, but bent, probably having been run over by a vehicle. In the old days, I could have asked any of a number of hunters in the neighborhood what to do. But hunting is becoming less popular, so less available sources. Although it was probably remote I could set off the primer and powder, I did not want to take a chance. So, I called Monroe Police and gave it to responding Officer Bob Bennett with whom I had a great conversation about the local woods. (Officer Bennett opened the conversation, asking if I was the guy…. Uh, oh, a police officer asking if I was the guy! Actually, he asked if I was the guy who posts nature photographs on the local Facebook page. Guilty, Officer. I mean, Yes, Officer.) As for the shotgun shell, who knows where it came from. My friend, the rabbit, disappeared. Was it warning me about the shell? 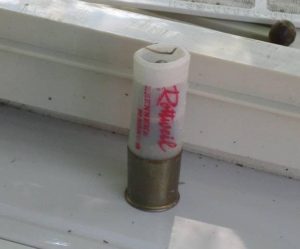 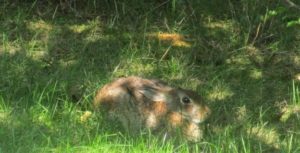 My rabbit friend. Was it warning me about the shotgun shell?

FLOWERING HIGHTSTOWN: One of my regular stops is the Hightstown Diner, where Kathy and George Antonellos have been great hosts over the decades in their 1941 diner. What I notice when I visit the diner is the flowers in this quaint, historic Mercer County town. So, I walked about, shooting photos of them. (If you like South Jersey-Philadelphia scrapple, the Hightstown Diner has it – one of the northernmost locations where scrapple can be found. Me, I love scrapple!) 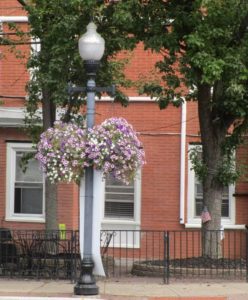 The corner of Mercer Street (Route 33) and Rogers Avenue in Hightstown, Mercer County. 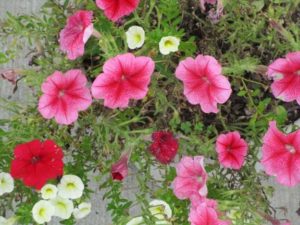 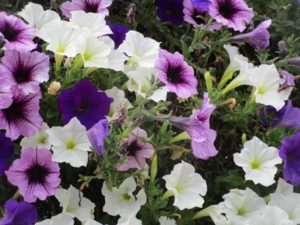 DRIVE-BY NATURALIST, A GREAT EGRET: As I was driving home from Hightstown, I crossed the Millstone River, the boundary of East Windsor, Mercer County, and Cranbury, Middlesex County. There, I noticed a perched great egret, “Ardea alba.” Keep an eye out for nature. It is all around us. 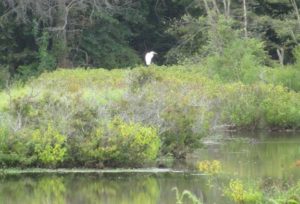 A great egret on the Millstone River. Here, the river is the boundary of East Windsor, Mercer County, and Cranbury, Middlesex County.

THE NIGHT SKY: The new moon is September 20, Wednesday. The next full moon is the Full Harvest Moon October 5, Thursday. 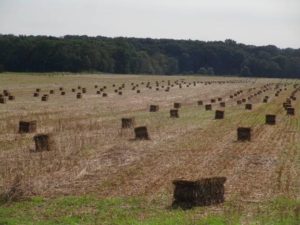 Harvest time it is. Here, hay being harvested on a farm in Cranbury, Middlesex County.