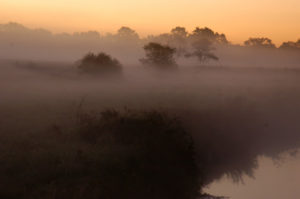 An orange sky rests upon the impenetrable white fog as dawn breaks over Holland brook on the first day of September. The predawn landscape is shrouded in a heavy mist so deep, only the treetops can be seen.

As September exhales the last warm breath of summer, it begins to inhale cool autumn air in a respiratory sequence of endless seasonal change.

With barely 9 days of autumn out of 30, the title to September is in summer’s name, despite the lien filed by fall for possession. The struggle that ensues is openly expressed in fits of alternate ownership, where autumn takes over with chilly nights while summer responds with beautiful warm days, indistinguishable from its July and August menu.

The engagement of warm summer days and cool autumn nights, in a battle for dominance, leaves the river’s flood plain covered with heavy morning mist. The impenetrable white fog hides everything except isolated tree tops to give the impression of a primordial soup that first gave rise to life on earth. 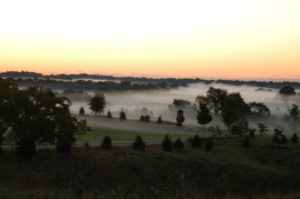 White mist rising up from the South Branch, submerges trees in a dense early morning fog, characteristic of the drastic day and night temperature changes in early fall.

As autumn appeals its case to the heavens, the sun begins to shift its position and rides lower in the sky, away from its high summer orbit. Evidence of this collusion is signaled as the dawn light colors the morning mist with every tint from gold thru orange to deep purple; a precursor to the colorful foliage that defines the fall season. The colors signal another vote for autumn’s plan to own September. 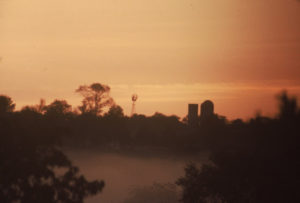 Except for the silhouette of farm building on the high ground, this scene has played out along the South Branch for thousands of years when autumn approaches.

Ultimately it is the stars in the heavens which have the final say, as they align to signal the exact moment of the autumnal equinox to find in fall’s favor. There is no chance of appeal, though summer still resists.

Offering blue skies and warm days, scraped from the bottom of it’s now empty quiver, summer attempts to keep the foliage from changing to a colorful no vote.

First to buy into autumn’s argument is Virginia creeper and poison ivy. Summer ignores their decision and counters that vines showed color back in August. A time clearly owned by summer and validated by consensus. It is when the black gum trees’ leaves began to turn a bright salmon color that summer’s brave stance began to waver. Here was a tree whose leaves began to light up the greenery like old fashioned lights tacked to the porch rail to celebrate the holiday season. Once the trees began to turn, summer knew its days were numbered. 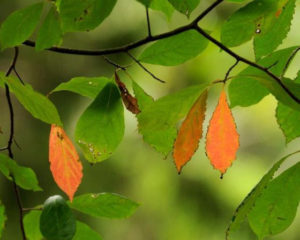 The stalwart oaks were the next to be counted as they sounded in favor of autumn, treating each fallen acorn as a separate vote. The deer found in favor of summer and began to eat all the fallen acorns in an attempt to cancel the oaks’ ballots. If summer was hard of hearing and the polling place rife with fraud, the oaks along with the sweet gum trees blinded the hillsides with color. Deep scarlet red oak leaves combined with a brilliant array of yellow, purple and old rose, star shaped sweet gum leaves. Norway and sugar maples chimed in with fluorescent red and yellow leaves. The final tally was overwhelming, a landslide in favor of autumn’s claim to September and an end to summer’s futile efforts to hang on. 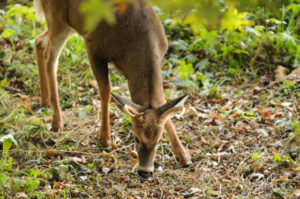 A young buck searches the ground for acorns in early September. Acorns are the number one food that deer love. when you see deer hanging around under a tree in early fall, notice that tree is more than likely an oak. Deer dine as we are supposed to, they eat what is in season.

Summer looked upon the flowers of the field to see the drooping heads and faded colors of the delicate muses it so carefully nurtured and who, in return, stood by summer’s side until their death. Summer was finally moved to surrender its claim of September to autumn. With a last warm breath, summer whispered a vow to return, even before the final days of the next spring.