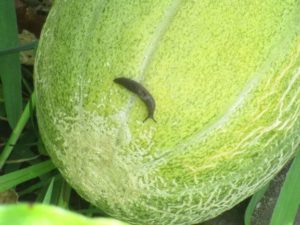 This photograph – that of a slug on a cantaloupe — basically sums up my garden’s summer fruit and vegetable crop. Slugs like moisture. And it was just a wet season.

GARDEN VOICES, NO.1: “It has simply been too wet for most things,” said Bob Eriksen, a retired biologist with the state Department of Environmental Protection who gardens in Warren County, just outside of the Jersey Midlands. “I have had groundhog issues in our garden, as well as deer. The deer are early — when the mulberries are hitting the ground, they spend time poking around our yard nibbling on everything. The groundhogs have been a major issue, eating everything from tomatoes and peppers to petunias. I have removed eight, so far, and believe there are still at least two more. I did not trap any last summer, but the summer before I caught nine.”

IN THE GARDEN: Aside from the zinnias and Knock Out roses, both of which continue to produce nicely, I pretty much have given up on the rest of the summer crop. Not one cucumber! And I fear not one cantaloupe will ripen properly. But the fall crop of carrots and lettuce, planted in early August, are coming up nicely. 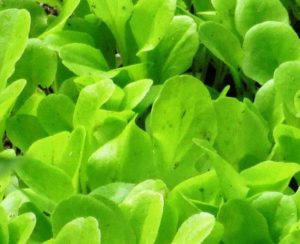 GARDEN VOICES, NO. 2: Paul Migut, a childhood friend and one of my gardening mentors, checked in from South River, Middlesex County. Paul, who is in his early 60s, has been food gardening since childhood: “I’d say this wasn’t the best of year for the vegetable garden. I’d say 3 out of 5.

Bush beans producing about 20 percent of previous month. Some plants drying up, branches showing signs of ‘old age’ (brown, brittle). Pickles still producing, but much slower, and also appear to be drying despite watering at 6:30am. Zucchini, a total waste as borers devoured the stalks.

Eggplants producing, but not as plump as prior years. Rutgers tomatoes small, (good color and that Jersey flavor!). Yellow (acid-free) producing fairly well, though appear a bit delicate with signs of spots, imperfections, but rather juicy. Radishes done. And the ‘mistake’ purchase of turnip (Purple Top White Globe, ‘Brassica rapa’) are still leafy, bushy, and still getting bigger — some over 4 to 5 inches diameter. Pulled more weeds than crops yesterday! Now to the house- rotate use of de-humidifier water between hydrangea in front of house and to refill backyard birdbath.” Paul is a great food gardener, making a not-so-good food garden year still a good year.

Circa late 1960s, Monroe Township – Paul Migut with an 8-horsepower roto-tiller at the huge garden of his uncle, Stanley “Pon” Ceslowski.

AROUND THE YARD: I was harvesting zinnia in the backyard garden when a large shadow passed over the backyard. I looked up and only a few yards away flew two turkey vultures, “Cathartes aura.” Usually, I see them soaring, riding the currents, rather than being nearby. I did not smell any dead animal for them to scavenge. So, perhaps they were perched nearby and I startled them.

This turkey vulture flew off while I was in the backyard.

CATBIRDS AND CAT: I was doing some outside painting when a ruckus interrupted me. About four catbirds, “Dumetella carolinensis,” converged in the shrubbery behind me, next to the street. Underneath the hedges was the neighborhood cat, feasting on what was once part of the catbird clan.

DRIVE-BY NATURALIST: I was driving across the Swimming River Reservoir on the boundary of Holmdel and Colts Neck in Monmouth County and noticed two great egrets, “Ardea alba,” so I stopped and shot photos of one with Canada geese, “Branta canadensis.”

A great egret and Canada geese on the Swimming River Reservoir in Monmouth County. 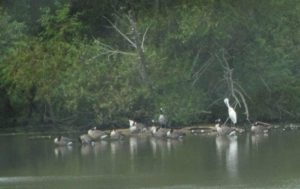 Another view of the great egret and Canada geese on the Swimming River Reservoir.

SEA BRIGHT BEACH: The Atlantic Ocean had a bit of a chop on the afternoon of Tuesday, August 29, at Sea Bright, Monmouth County, the surf tussled by the wind — sustained at about 10 to 13 knots per hour (a “gentle breeze” to “moderate breeze”) and gusts up to 14 to 19 KPH (“moderate breeze” to “fresh breeze”) about 3:30 to 4 o’clock, all out of the East Northeast, as recorded at nearby Sandy Hook. (Honestly, I thought the wind was blowing harder at Sea Bright.) Flags were extended, the surf rough, and foam, created by an agitated ocean, covered the surf line. Plus, it was raining. …But it was OK, that is what nature is about. And I had the beach to myself! 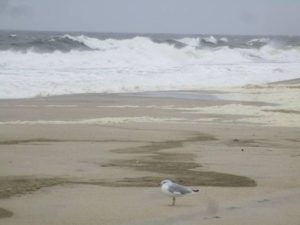 On this day at the beach in Sea Bright, Monmouth County, whitecaps were on the Atlantic Ocean, the surf churned, and the agitated ocean produced foam covering the surf line. It was kind of a day for the birds – or beach naturalists.

Flags at the Sea Bright Ocean Rescue Headquarters show the force of the wind.

SEPTEMBER AT THE SHORE: The traditional Jersey Shore summer season is the Memorial Day Weekend to the Labor Day Weekend. So, Labor Day Monday, September 4, would mean it is all over. Wrong! Remember the Shore secret, September is the best month at the Shore – less people, warm air and Atlantic Ocean temperatures, soft sunlight. But be extra careful if going into the ocean when lifeguards are not on duty.

2013, September, at the Atlantic Ocean in Asbury Park.

YELLOW FLOWERS IN THE FIELDS: The “Bidens” genus flowers are blooming nicely on unused farmland and disturbed areas. I vaguely remember hearing a story this yellow flower is not native to New Jersey, first being discovered in the state along railroad tracks at Camp Kilmer near New Brunswick in the post-World War II or Korean War years, suggesting it was transported from its native southern United States via railroad. I am going to take a guess and identify the species as “aristosa.” (But this historical and botanical information would have to be verified.) Basically, it is a weed — although a colorful one that brightens fields this time of year. 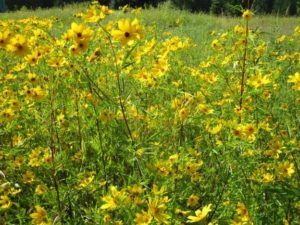 More of the “Bidens” wildflower in South Brunswick, Middlesex County. 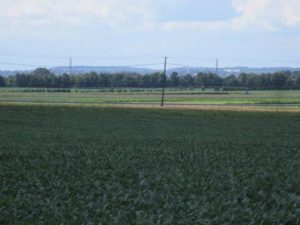 Where the generally flat Coastal Plain meets the rolling hills of the Piedmont — In the foreground is a soybean field on the boundary of Cranbury and Plainsboro in Middlesex County on the Coastal Plain, or more specifically the Inner Coastal Plain. In the distance haze are the rolling hills of Princeton, Mercer County, on the Piedmont. The Jersey Midlands are filled with stories of geology, flora, fauna, and, especially if we turn off outside lighting, the Night Sky.

COASTAL PLAIN BODIES OF WATER: Between the soybean field and the hilly ground in the previous photograph is a 23-acre pond in Plainsboro. The name on the sign, “Mill Pond Park,” says a lot. Its name suggests the pond was built, by damming Cranbury Brook, to form a power source for a mill. Most, if not all, bodies of water on the generally flat Coastal Plain are human-made.

The dam that holds back Cranbury Brook to form Plainsboro’s Mill Pond.

A TALE OF TWO DEER: As I drove through Thompson Park in Monroe, I noticed a white-tail deer, “Odocoileus virginianus,” buck. He had a beautiful 10-point, velvet-covered rack. He was not free. Instead, he was confined behind a fence as part of the park zoo. Later that day, I saw another beautiful buck, this one on a section of Sourland Mountain in Montgomery, Somerset County. He roamed freely in a rural area of woods and farmland. But how free is “free”? Assuming the status of the two deer does not change, the zoo buck will be safe during hunting season, but the Sourland Mountain deer may wind up as someone’s meal or trophy. 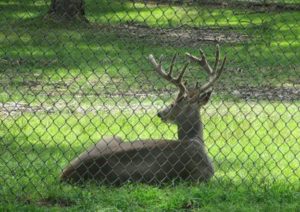 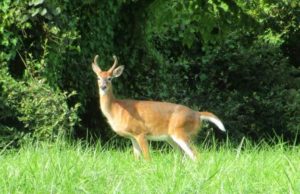 FOR LAWN LOVERS, BLEGGGGGHHHH!: As you probably know, I dislike trophy lawns – basically, non-native wastelands filled with pollutants. Better to go green – go organic, go with native plants instead of a lawn, create high-grass wildlife patches, grow vegetables, or plant annual flowers that attract pollinators. But if you must…. Now is the correct time to seed lawns – as early in September as possible, not later than mid-September. This time of year provides for good seed growth, while competitive weeds are no longer growing. See the Rutgers University Cooperative Extension Service “Seeding Your Lawn” fact sheet, https://njaes.rutgers.edu/pubs/fs584/. 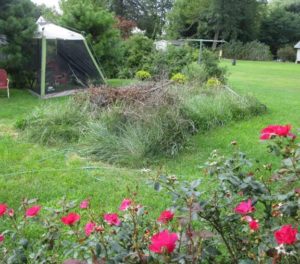 A wildlife patch in my neatly kept, but un-trophy-like, lawn.

GARDEN VOICES, NO. 3: Priscilla “Peppy” Bath, who gardens in Hamilton, Mercer County, knows about my quest to eliminate lawn in favor of garden. She checked in from vacation in Germany’s Black Forest. “I took a walk this morning and the house across from my hotel has no grass at all, just a beautifully maintained garden. It has flowers and vegetables, no weeds. Knock Out roses, cosmos, mountain pink, lots of lettuce, green beans, tomatoes, zucchini, and bare spaces where other already-harvested vegetables were. Perhaps this is what you are striving for.”

LEECHES: Sophie Onda Sapia used to tell me about leeches when she was a kid in the Pine Barrens Around Helmetta, where she lived all her 81 years, from 1913 to 1995. Ma said sometime one or more would latch onto one when swimming in the local waters. I have been around these waters all my 60 years – blessed to still walk afield where my maternal family has walked more than 100 years, despite New Jersey urbanization – and never recall pulling a leech off me. But I saw some chatter the other day on the “Jersey Pine Barrens” Facebook.com page about the “unusual amount” of leeches encountered, this year. Thoughts?

GRIGGSTOWN FARM: I stopped at Griggstown Farm near the Delaware and Raritan Canal in Franklin, Somerset County, and bought some goods – sweet corn, tomato, etc. Of course, I shot photos. More information, https://griggstownfarm.com/.

The market at Griggstown Farm in Franklin, Somerset County. 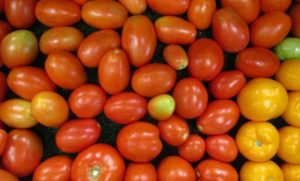 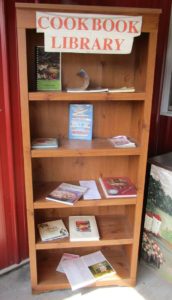 OCEAN TEMPERATURES: Atlantic Ocean temperatures on the New Jersey coast were in the range of about 72 to 74 degrees Thursday, August 31.

THE NIGHT SKY: The Full Corn Moon is on the Sept. 5-6, Tuesday-Wednesday, overnight.

The zinnias from the garden keep on giving. Here, at a friend’s house.