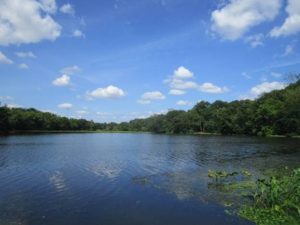 Etra Lake, in East Windsor, Mercer County, sits on the Inner Coastal Plain. Most, if not all, bodies of water on New Jersey’s Inner and Outer Coastal Plains, are human-made – in Etra Lake’s case by the damming of Rocky Brook. Rocky Brook is part of the Raritan River-Bay watershed. The damming of the lake appears to go back to the late 1700s to create a power source to run a grist mill. The name “Etra” actually is an acronym, “ETRA,” after a prominent resident, Edward Taylor Rosel Applegate, born in 1831 and died in 1915.

THE CUESTA: Of New Jersey’s four land regions, two are in the Jersey Midlands – the rolling terrain of the Piedmont and the generally flat Coastal Plain. The Coastal Plain can be broken down further – the Outer and Inner. What people may not realize is the Coastal Plains are divided by an on-again, off-again hill system – the cuesta. The cuesta essentially runs from Sandy Hook in the northeast to the Philadelphia area in the southwest. It can easily be traced on a map through place names, from northeast to southwest – Highlands, Atlantic Highlands, Crawford Hill (391 feet above sea level) and Telegraph Hill (360 feet) in Holmdel, Quail Hill (258 feet) in Manalapan, Backbone Hill Road (250 feet) in Millstone, all in Monmouth County; Arneys Mount (230 feet) in Springfield, Mount Holly (183 feet), and Mount Laurel (173 feet), all in Burlington County. The cuesta or cuestas may rise hundreds of feet around surrounding land; Crawford Hill, for example, is the highest point in Monmouth County and rises about 350 feet over surrounding lowlands. The cuesta formation was formed at the time of the late Cretaceous and early Tertiary ages, two periods of geologic time that met about 66-1/2 million years ago. It basically was formed by water runoff, eroding the surrounding land and leaving the cuesta. The cuesta remains because it is cemented together by ironstone. 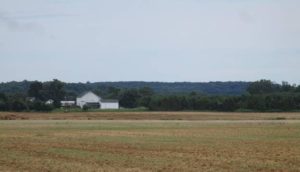 2017, August 6, Sunday — A view of the cuesta from the Union Transportation Trail in Upper Freehold, Monmouth County. The view is looking toward the Shore, so the abrupt rise in the terrain is seen. From the other side of the cuesta, the change in terrain is more gradual. 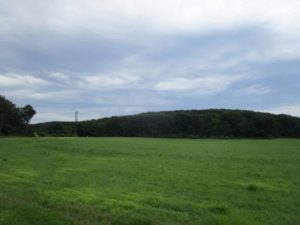 2017, August 6, Sunday — Another view of the cuesta – here, near the Horse Park of New Jersey in Upper Freehold, Monmouth County. 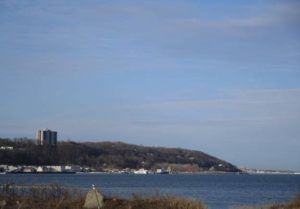 2016, January – Looking at the cuesta, about 200 feet above sea level, across Sandy Hook Bay from Sandy Hook.

BUTTERFLIES IN THE ZINNIA PATCH: Last year, my newspaper reporting travels took me to Bobby Laurino’s farm market in Colts Neck and Andy Capelli’s farm market in Middletown. I was amazed by the bees and butterflies attracted to their zinnia patches. Here was this abundance of pollinators and they were fun to watch. So, I did some research on zinnia – liking it because it is an annual, not a perennial I would be stuck with – and planted it in my garden, about 35 to 40 row feet. I wish I planted more! In recent days, I have spotted these butterflies: painted lady, “Vanessa cardui”; spicebush swallowtail, “Papilio troilus”; cabbage white, “Pieris rapae”; silver-spotted skipper, “Epargyreus clarus”; and monarch, “Danaus plexippus.” I try to become one with the zinnia patch, or at least letting the butterflies do their thing and me doing my thing, which allows me to get close to them and take great photographs. 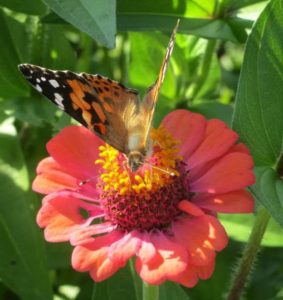 A painted lady butterfly in my zinnias. 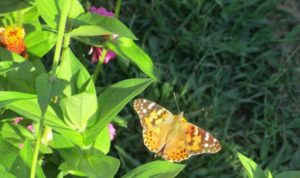 Painted lady in the zinnias. 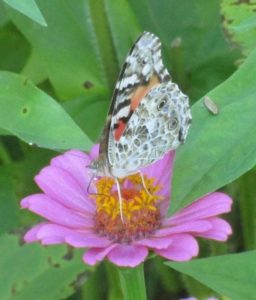 Painted lady on a zinnia. 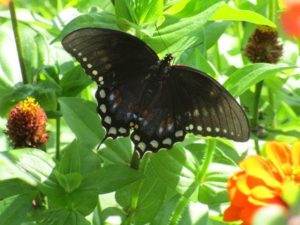 Spicebush swallowtail in the zinnias. 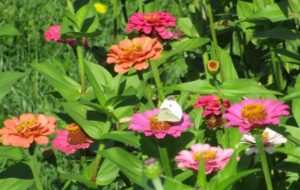 Cabbage white in the zinnias. 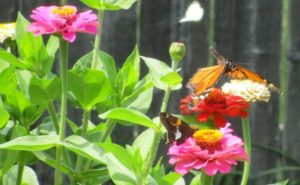 Silver-spotted skipper, lower, and monarch, upper, in the zinnias. 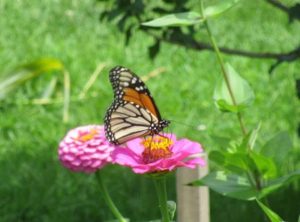 Monarch in the zinnias. 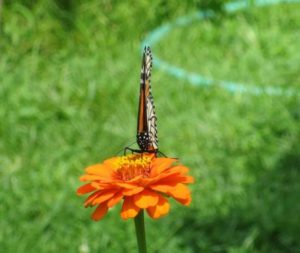 Monarch on a zinnia.

GARDEN VOICE NO. 1, DEBBIE MANS: Debbie Mans reported, “We were just comparing notes at work on our gardens and we are all not seeing great results — split tomatoes, fizzled squash, slow on the tomatoes ripening, etc. This is in Monmouth County and Essex County. I am hearing more and more from others, too. You are not alone!” (Debbie is executive director and baykeeper for the New York-New Jersey Baykeeper environmental group based in Keyport, Monmouth County. Here is a profile I wrote of Debbie last year, http://tworivertimes.com/debbie-mans-midwesterner-with-jersey-sand-in-her-shoes/.) 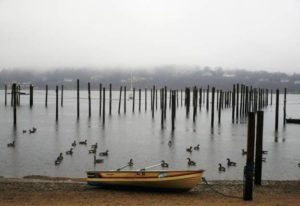 GARDEN VOICE NO. 2, JACK MAHON: South Jersey gardener Jack Mahon and I recycle dehumidifier water, using it for gardening watering. But, this year, both Jack and I have noticed something – the heavy rains have left us with an overabundance of water. “The rain has been so heavy at times that the dehumidifier is way ahead of the trees’s need for water,” Jack said. Ditto. In recent days, my two barrels of water for the garden, totaling 50 gallons, have been full.

IN THE GARDEN AND YARD: I continued harvesting flowers, both zinnias and Knock Out roses, along with sweet corn. The fall crop is sprouting. And I watch the cucumbers and cantaloupe, hoping something comes about. The cantaloupes look OK as they grow, but the cucumbers seem to be victims of too much rain and I wonder if I will even get one to use. 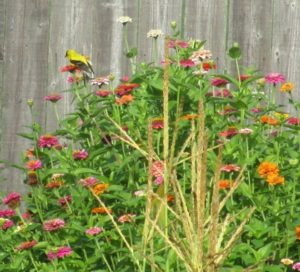 A male Eastern goldfinch, “Spinus tristis,” perched on a zinnia flower in the garden.

MONROE TOWNSHIP COMMUNITY GARDEN: I visited my lifelong hometown’s Community Garden and Park. It is a nice setting along the Millstone River. But I wish Monroe, which continues to develop heavily, would practice greener principles. For example, abandon magazine-photograph lawns and replace them with more productive organic gardens. Me, I am trying to go with as little lawn as possible – and my lawn is chemical-free. I know, I strive for an Old Monroe in a New Monroe whose population over its approximately 42 square miles is an estimated 45,000, a big difference from the estimated 5,000 when I was born in 1956. 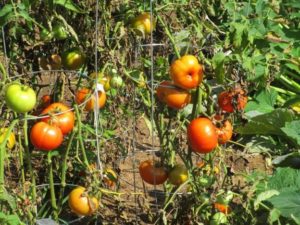 Tomatoes in the Monroe Community Garden and Park.

Flowers at the Monroe Community Garden and Park.

THE ECLIPSE OF THE SUN: On Monday, August 21, New Jersey will be treated to a partial solar eclipse. It begins at 1:22 p.m., peaks at 2:44 p.m., and ends at 4 p.m. DO NOT LOOK AT THE ECLIPSE UNLESS YOU HAVE SPECIAL PROTECTIVE EYEWEAR. (While I find the eclipse exciting, I do not want to take chances of looking up. So, I will take a nap, work in my cellar or garage, or follow the eclipse on the computer or television.) See https://eclipse2017.nasa.gov/.

CARDINAL PHOTO: The photo of a cardinal, “Cardinalis cardinalis,” in last week’s “Garden and Afield” drew a nice response from backyard neighbor Fran D’Aiello Rosuck. Fran and her husband, Ed, have been my family’s neighbor for about 40 years, or since about the time I went on my own after college. Then, after my parents, Joe Sapia Sr. and Sophie Onda Sapia, died, I, as an only child, moved back and took over the house. This summer, the outside of the house was remodeled. Fran said, “I always read that a cardinal is a visitor from Heaven. Your mom is probably saying the house never looked so good.” What a nice comment to find on my “The Jersey Midlands” page on Facebook.com. 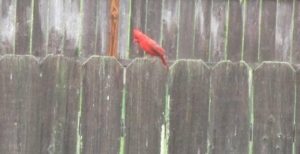 The cardinal at my garden. Actually, it is on backyard neighbor Fran D’Aiello Rosuck’s fence.

OCEAN TEMPERATURES: Atlantic Ocean temperatures on the New Jersey coast were in the range of about 75 to 77 degrees. 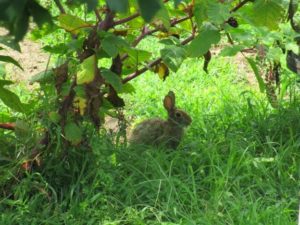 Rabbit, genus “Sylvilagus,” in the garden.