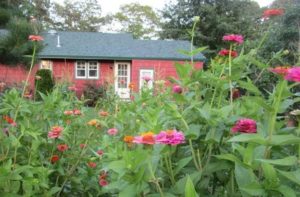 Looking across my backyard garden to the Knock Out roses and the house.

IN THE GARDEN: I began harvesting sweet corn – it tastes so good! I continued harvesting zinnia, mostly giving them away. Because zinnia are so beautiful, make nice bouquet gifts, and are so attractive to pollinators, I plan to really expand on growing them next year, taking over what is now a waste of lawn. I finished planting seeds for fall crops of beets, carrots, lettuce, and peas. Including early season, summer and fall crops, my garden is about 450 row feet. I began keeping a record of my harvest, so I have an idea how productive the garden actually is. Next year, I plan to keep the record from Day 1 harvest to Last Day harvest. 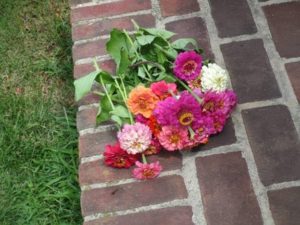 A zinnia bouquet heading to friends at my Sunday lunch stop, the Hightstown Diner.

A BAD GARDENING YEAR: I thought my garden was bombing out because of my lack of skills, but I continue to get reports of it not being a productive vegetable year. Paul Migut, a childhood friend and a gardening mentor of mine, checked in from South River, Middlesex County: “Agree, not one of the best garden years, here either.” Jack Mangano of Helmetta told me his family’s plot is not doing as good as it should. The weather has been fickle, one day monsooning, another day sunny and in the 90s – seemingly more fickle than a normal Jersey hot and humid summer with thunderstorms in the afternoon. I found a split cucumber, which, I suspect, was a victim of the rain – the rain forcing it to grow faster than it was able to maintain, resulting in it finally bursting. 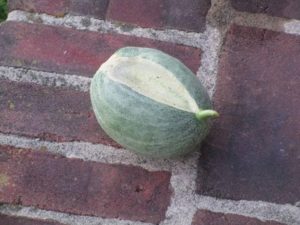 A split and ill-forming cucumber, an apparent victim of too much rain.

GARDENING TALK: Paul Migut reported on his garden: “Bush beans producing the best. Cucumbers growing well (made second batch of dill pickles in my grandmother’s 100-year-old old crock). Rutgers tomatoes getting bigger, but still green. Yellow (acid-free) almost ready to pick. Eggplants, too small to pick. Zucchini started out with a bang, until worm/borer devoured base of plant. By accident, I purchased a packet of turnip seeds, never grew these before, but wow- growing very well!”

ELSEWHERE AROUND THE YARD: I took off from feeding the birds this summer, letting them, instead, eat insects in the yard and serve as natural pesticides. So, I have not kept the eye I normally do on birds, mesmerized by them at the feeder. However, I did notice a bright yellow and black (male) Eastern goldfinch, “Spinus tristis”; a bright red (male) cardinal, “Cardinalis cardinalis”; and a favorite, a catbird, “Dumetella carolinensis” – the catbirds that keep me company in garden and afield. The toads are around, presumably helping control insects. I helped a toad out of a deep well of cellar window that was recently installed. I place a branch in the well; If a toad goes in, hopefully it can crawl out on the branch – because by the time I notice it, it may be too late. Of course, the friendly rabbits are around – letting me get close and probably eating up the garden. And the Knock Out roses, in their second bloom of the season, are getting better and better. 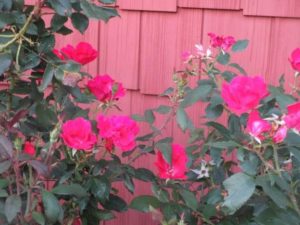 Knock Out roses are blooming beautifully in their second bloom of the season. 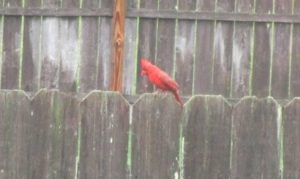 A male cardinal perched by the garden. A male, because it is bright red. The female is a dull brown.

ATTRACTING POLLINATORS, ZINNIA: While I love the beauty and no-fuss growing of zinnias, my real goal for planting them this year was to attract pollinators. This week, pollinators were around: 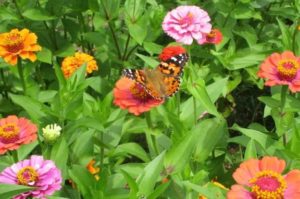 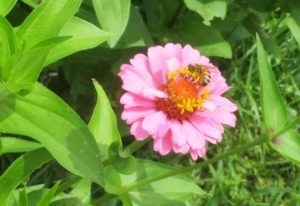 PERSEID METEOR SHOWER: The forecasted weather is not looking good, but take a chance and look up into the night sky on the overnights of August 11-12, Friday-Saturday, or August 12-13, Saturday-Sunday, the peak of the annual Perseid Meteor Shower. If there is a clear sky, an estimated 40 to 50 “shooting stars” will be visible per hour. The Earth will continue passing through Comet Swift-Tuttle’s path until August 24. See www.space.com/32868-perseid-meteor-shower-guide.html.

THE DRIVE-BY NATURALIST, ROADKILL: I was driving south on Route 539 in East Windsor, Mercer County, heading for the Assunpink Wildlife Management Area, when I came across an interesting sight -– vultures, both turkey, “Cathartes aura”, and black, “Coragyps atratus,” eating a roadkill deer, “Odocoileus virginianus.” It was an interesting study in nature, the death of one animal providing life-support to other wildlife. But it also was an interesting interaction between wildlife and humans – basically, traffic had to avoid the vultures, rather than the vultures making a serious attempt to avoid traffic. What did I take away from this scene? The importance of us helping living wildlife by moving dead wildlife off the roadway, because other birds may not be so lucky squaring off against traffic at a roadkill. A live bird could end up as roadkill. 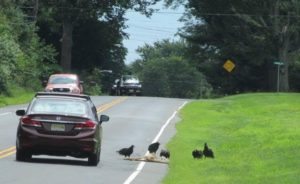 Notice how traffic has to move to avoid the vultures, while the vultures generally were carefree.

DRIVE-BY NATURALIST, NO. 2 – TURKEY VULTURES VS. BLACK VULTURES: Turkey vulture, red head, long tail. Black vulture, black head, short tail. (Note: I do not recall seeing a black vulture locally until probably the 1990s. They are a southern species that has moved northward.)

CONNECTING WILDLIFE HABITAT: The state Department of Environmental Protection’s Endangered and Nongame Species Program has been working on a project, CHANJ, or Connecting Habitat Across New Jersey, which is aimed at creating wildlife habitat connectivity, since about 2012. The plan is to make a public push in 2018. CHANJ is looking to protecting habitat and connecting habitat through such things as land purchase, management of land, and safe wildlife passage at roadways. Roadway mitigation could include using culverts and bridges to have a safe pathway for wildlife to cross roads. The idea is have connectivity using core areas, which could be as little as 200 acres to as big as state regions such as the Highlands of North Jersey and, locally, the Pine Barrens. Core is “an area with high ecological integrity,” said Gretchen Fowles, a CHANJ biologist. “That’s a fancy way of saying it has little human influence,” she said. In Monmouth County, for example, beside the Pine Barrens as a region, CHANJ looks at cores as such places as the Navesink River, Manasquan River Reservoir, Shark River, Allaire State Park, the Turkey Swamp state- and county-owned properties, Monmouth Battlefield State Park, and Assunpink Wildlife Management Area. Then, the idea is to connect such areas as forest, field, freshwater wetlands, and coastal maritime habitats. “This might be kind of a last chance to keep areas protected and intact,” Fowles said. The CHANJ website is at http://www.state.nj.us/dep/fgw/ensp/chanj.htm. Also, a CHANJ video is at https://www.youtube.com/watch?v=6UbBcTUfz1U.

MUSHROOMS: Remember the adage, “There are old mushroom pickers. There are bold mushroom pickers. There are NO old AND bold mushroom pickers.” Me, 60-years-old, lifelong Jersey Midlands, from a maternal Polish-Slovak family of pickers going back here more than 100 years and I will comfortably pick only 2 mushroom species: honey (or “opienki,” as my Polski side calls them), genus “Armillaria,” and morels genus “Morchella.” My confidence in only those 2 comes from being taught by two smart, non-bold pickers. Because this time of year is popular for wild mushrooms: http://www.philly.com/philly/health/n-j-mushroom-poisonings-spike-some-potentially-life-threatening-20170808.html 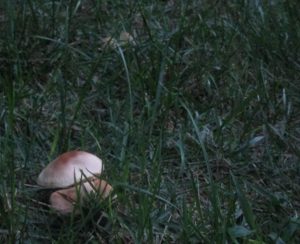 Inedible mushrooms in my yard.

“FALL” FOLIAGE: In the Pine Barrens around Helmetta, the beginning of the “fall” foliage usually is obvious in swamps beginning about July 15 to July 31. So, no surprise I have seen a few examples. 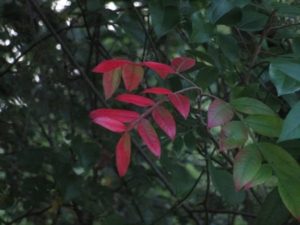 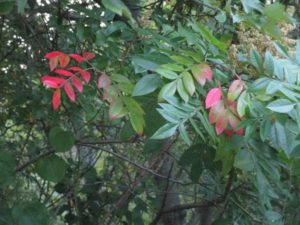 Another view of the changing colors in the Helmetta wetlands.

OCEAN TEMPERATURES: Atlantic Ocean temperatures on the New Jersey coast were in the range of about 76 to 78 degrees Thursday, August 10. 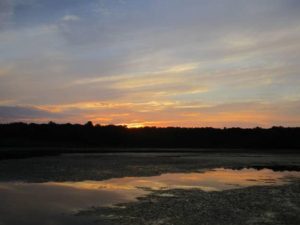 Joe Sapia, 60, is a lifelong Monroe resident. He is a Pine Barrens naturalist and an organic vegetable-fruit gardener. He gardens the same backyard plot as did his Italian-American father, Joe Sr., and his Polish-immigrant, maternal grandmother, Annie Poznanski Onda. Both are inspirations for his food gardening. Joe is active with the Rutgers University Master Gardeners/Middlesex County program. He draws inspiration on the Pine Barrens around Helmetta from his mother, Sophie Onda Sapia, who lived her whole life in these Pines, and his Grandma Annie.
Joe’s work also is at @JosephSapia on Twitter.com, along with Facebook.com on the Jersey Midlands page.