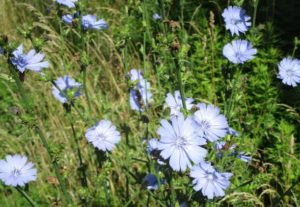 Blooming along a roadside in East Windsor, Mercer County, the beautiful, but non-native, chicory, “Cichorium intybus.”

IN THE FOOD GARDEN: I picked a cherry tomato and some carrots. Otherwise, the garden is between harvesting the early season crop of lettuce and awaiting the warmer weather crop of sweet corn, cantaloupe/mushmelon, and more tomatoes. So, come on pollination – the sweet corn has begun forming tassels (the male flower) and some silk (the female flower), while the mushmelon continues to flower in yellow.

Tassels, or the male flower, on the sweet corn in the garden.

ZINNIA IN THE FOOD GARDEN: Hopefully attracting pollinators to the food garden this year are the score of blooming zinnia of orange, yellow, purple, pink, white, and rose. I have been watching more and more flowers develop this week and, in turn, various pollinators – butterflies, bees, and flies – visiting the zinnia. This is my first year using zinnia, getting the idea from watching pollinators visiting the zinnia at Bobby Laurino’s R.J. Laurino Farms in Colts Neck (www.rjlaurinofarms.com) and Andy Capelli’s Capelli Farms in Middletown (www.capellifarms.com). For next year, I plan to go zinnia-crazy, interspersing rows throughout the food garden and converting more lawn to zinnia growing. 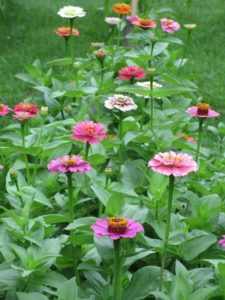 Zinnia in bloom in the garden.

FRUITING IN THE WILDS: Heads up in the wilds, blackberries, genus “Rubus,” should be fruiting here and there. Yes, they are edible – and taste great! From the New Jersey Department of Agriculture, http://www.nj.gov/agriculture/farmtoschool/documents/seasonality-chart/F2S%20Blackberries.pdf.

NEW BRUNSWICK IN FLOWER: I work part-time at Rutgers University’s Jules and Jane Plangere Writing Center at the College Avenue Campus in New Brunswick. But my parking area is cross-town, about 2 miles away at the Douglass College campus. This time of year, especially, I try to walk both ways. The walk gives me a great opportunity to photograph the city of my birth – St. Peter Hospital, Class of 1956. This week, I photographed flowers – white, light pink, dark pink, yellow, red. (Side note: For about half of my 31-year newspaper reporting career at the Asbury Park Press, Mr. Plangere was an owner. Mr. Plangere died in September at 95 years old – but he is still taking care of me!) 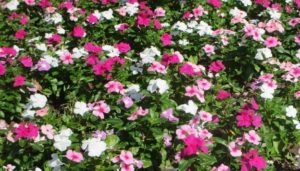 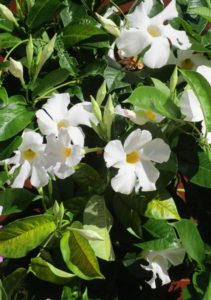 STARLINGS: Blame these European invaders on lovers of playwright William Shakespeare! According to Cornell University’s All About Birds website, “All the European Starlings (“Sturnus vulgaris”) in North America descended from 100 birds set loose in New York’s Central Park in the early 1890s. The birds were intentionally released by a group who wanted America to have all the birds that Shakespeare ever mentioned. It took several tries, but eventually the population took off. Today, more than 200 million European Starlings range from Alaska to Mexico, and many people consider them pests.” 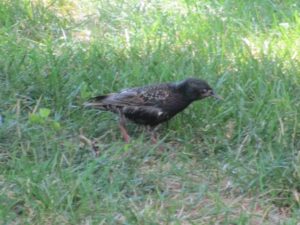 A starling on a New Brunswick lawn.

GARDEN TOOLS: As an only child, I inherited the house I grew up in, moving back to it in 2002. My parents, Joe Sapia Sr. and Sophie Onda Sapia, are the original owners of the house, dating to 1953 and my maternal grandmother, Annie Poznanski Onda, moved in with us in probably 1966. So, basically, three generations have lived here, meaning three generations of “stuff” reside here. When I moved back, I rented a 30-cubic-yard trash bin and cleaned house, except for things that were sentimental and things I figured I could use. So, today, if I need something, before I go out and buy it, I check if I have it around the house or check to see if I can rig something together from what I have around the house. This includes gardening tools. I have a shovel I use frequently and a garden claw for weeding, both with loose handles. A few days ago, I got tired of this loose-handle stuff. So, I used a technique Uncle John Onda taught me when I was a kid: place the item in water, the wood will swell, end of the loose object. I taped the claw and the shovel to the way I wanted the handles positioned, then I put them in my 20-gallon garbage can of gardening water I keep handy. About 36 hours later, I pulled them out – gardening tools that no longer have loose handles. This week, I took another shovel and am doing the same thing. 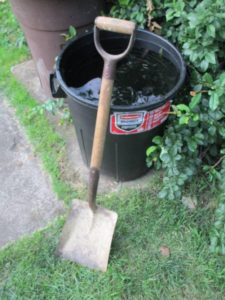 This shovel is about to be soaked in the barrel of garden water. 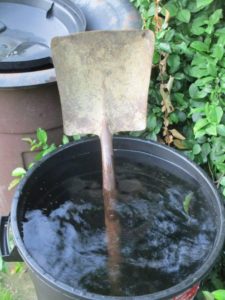 The shovel handle soaking, and swelling, in the barrel of gardening water.

OCEAN TEMPS: Atlantic Ocean water temperatures at the Jersey Shore are running at about 73 degrees to 76 degrees. The average at Sandy Hook for July 16 to 31 should be 71 degrees, according to the National Oceanic and Atmospheric Administration (NOAA).

RIP CURRENTS: This season, you may have seen various warnings of rip currents during television or radio weather reports. Rip currents – also referred to incorrectly as “rip tides” – are currents of water being returned to the ocean from the beach. A rip current dissipates within hundreds of feet, but that is enough time to sweep a swimmer out into the ocean or make it difficult for that swimmer to swim back to the beach against a rip. Basically, there are three things a swimmer can do. One, rips are relatively narrow, so the swimmer can try getting out of the rip by swimming parallel to Shore, rather than back in, until he or she is out of the rip. Two, ride out the rip and, then, swim parallel to Shore and back in. Three, float and signal for help. See NOAA’s advice, http://www.ripcurrents.noaa.gov/surviving.shtml.

WHITE ORCHID IN THE PINES: As its name suggests, the pink lady slipper orchid, “Cypripedium acaule,” generally has a pink flower. But rarely, the flower can be white. During this year’s pink lady slipper blooming season, basically late April-early May into June, outdoorsman Jay Schoss, who is a trustee of the Outdoor Club of South Jersey, found a rare white one in the Whitesbog, Burlington County, area of the Pine Barrens. I have never seen one that I can recall in my 60 years! A great find. (Thanks to outdoorswoman Faye Bray, an Outdoor Club member, for taking the photo and coming through in supplying it. The white variety was “freaking remarkable” and “absolutely beautiful,” Faye said. If you get a chance, take an OCSJ hike led by Jay or Faye. Both are great leaders and great people.) 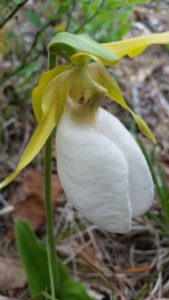 LAST WEEK’S DRAGON FLY: Roger Dreyling, a lifelong Jamesburg area outdoorsman and my cousin through marriage, identified the dragonfly I could not identify last week. It is a common whitetail, “Plathemis lydia.” 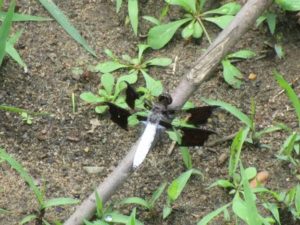 A common whitetail dragonfly in the garden earlier in July.

NORTHERN LIGHTS: Mass ejections from an explosion at the Sun are to reach Earth Sunday, July 16, possibly enhancing viewing of the Aurora Borealis, or “Northern Lights.” The National Weather Service is saying the Northern Lights may be visible as far south as the Great Lake States and New England. Hmmmm, close enough to us to take a look into the Night Sky on the Sunday-Monday overnight.

I HAVE GOT MY YARD BACK: After almost five weeks of a house-remodeling project (altering the roofline, new roof, new siding, new gutters and drainpipes, and little things here and there), I have reclaimed my yard from the contractors – not totally, because a few odds and ends remain in the coming week or two, but generally. This means, I can get back to some very-needed yardwork – cutting the lawn, trimming the shrubs, and maintaining the garden.

The hardwood forest at Van Dyke Farm, a combination of farm and woods in South Brunswick, Middlesex County.