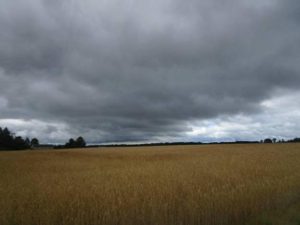 A rainy day begins to clear at a farm on Plainsboro Road in Cranbury, Middlesex County.

IN THE GARDEN: Harvesting-wise, the garden has slowed down, with the lettuce taking on a bitter taste, suggesting it is done for the cool season. I will plant more lettuce later in the summer for the fall season. Otherwise, I wait for tomatoes, corn, and cantaloupe. I do not know what happened to my cucumbers, except that I cannot find any growing. So, again, it is the three Ws: Water, Weed, and Wait. But the big discovery, or re-discovery, was the tomatillo plants growing, and fruiting, in the garden. I never planted them, but, for at least three gardening seasons, there they are. So, add them to my future harvest. 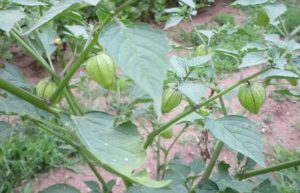 Tomatillos, which I never planted, fruiting in the garden.

AROUND THE YARD: I try to observe, whether it be looking around the yard or the sky (both night and day). As the week wrapped up and I was in the garden, I saw a red-tailed hawk, “Buteo jamaicensis,” soaring over the neighborhood. The Knock Out roses continue blooming nicely, the second bloom of the season. And I am visited by rabbits, probably “Sylvilagus floridanus,” and one of my favorites in wildlife, the catbird, “Dumetella carolinensis.” A catbird, unsure if it is the same one, keeps me company in the yard, whether I am gardening or simply hanging out. 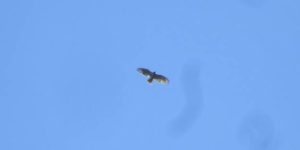 A red-tailed hawk soaring over the neighborhood. 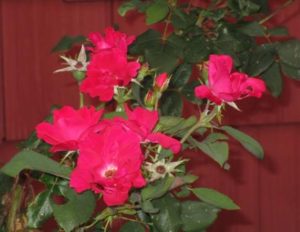 The yard’s Knock Out roses are in their second bloom of the season.

PINE BARRENS AROUND HELMETTA: Over the week, I walked afield only once and briefly. But I am around the wilds and drive paved roads through them daily. And I keep the camera at hand. I photograph a lot in a capture-the-moment way. So, I avoid using a cellphone, because it takes too long to unlock and it is too difficult to maneuver one-handed, instead using a point-and-shoot camera. I keep the camera at the ready — on the dashboard of my Jeep or, when I am doing yard work, in my pocket. Alas, this week, I was driving, I could not stop the Jeep, grab the camera, and focus the camera quickly and properly, missing a good photo of a group of turkeys, “Meleagris gallopavo,” with a deer, “Odocoileus virginianus,” in the background, around a woodpile as I drove past a house in the woods of Jamesburg Park. But I did photograph the turkeys and deer separately. 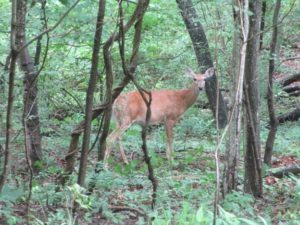 The deer in the Jamesburg Park section of East Brunswick. 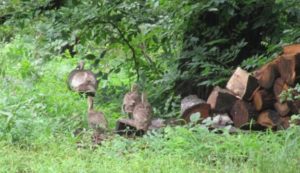 WATERING THE GARDEN: I continue to obsess over watering the garden. This year, I have avoided “brown water,” or already used water such as bath water. Instead, I use freshwater, a combination of house system water, water from Manalapan Brook, captured rain water, and water from the cellar de-humidifier. I water daily, always before 10 a.m. so water is not lost to evaporation in the heat of the day and leaving the day for the plants and soil to dry, keeping fungus away. Now, I am considering watering fewer times a week, but in heavier doses. Friend, gardener, and environmental scientist Virginia Lamb had these thoughts, “I only water maybe twice a week and directly on plants, individual or rows. Probably roughly 2 quarts per plant. … Also you need to add mulching to your list of three Ws. …It will help retain moisture and keep weeds down. Also, add compost to the soil.”

EBONY JEWELWING AT THE BROOK: Manalapan Brook, which my family through my maternal side has lived along more than 100 years, runs about 400 feet from my front door. I regularly take a walk across the street and head to the Brook at the edge of the woods. This week, I encountered one of my favorite wildlife species, the ebony jewelwing damselfly, “Calopteryx maculate” – a beautiful combination of neon green and deep black. Two were flying around. I was hoping at least one would land on my outstretched arm, but not on this day. Eventually, I grabbed a bucket of water for my garden and went back home. 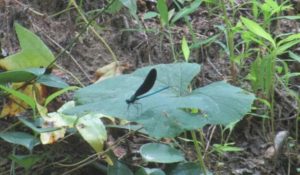 An ebony jewelwing rests along the bank of Manalapan Brook.

DAMSELFLY OR DRAGONFLY: When I was visiting Manalapan Brook, I also saw a dragonfly. What kind? I do not know. But I knew it was a dragonfly because at rest, its wings were like those of an airplane, parallel to the ground. A damselfly rests with its wings perpendicular to the ground. 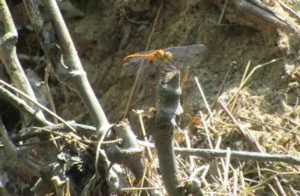 A dragonfly on the bank of Manalapan Brook.

SPOTSWOOD LAKE: Spotswood Lake, also known as DeVoe Lake or Mill Lake, is formed by the damming of Manalapan Brook. I happened to be at Spotswood Lake this week when the moon rose above it early in the night. So, there was a nice combination of the moon and soft sunlight. 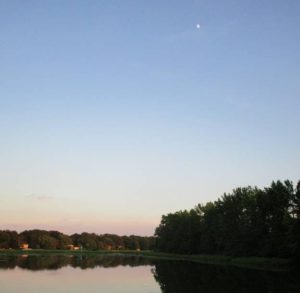 The moon over Spotswood Lake. 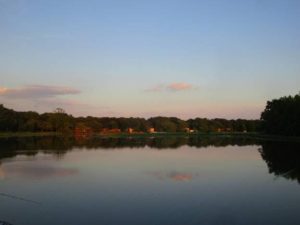 BALD EAGLES: I saw a Facebook report of a bald eagle, “Haliaeetus leucocephalus,” on road kill in Jamesburg. Debbie Sullivan Farrell reported, “Did anyone else see the eagle by the rescue squad at 9:50 this morning? I turned onto Gatzmer from Hillside and was going towards the tracks. An eagle was checking out some road kill and flew off towards the firehouse. It was huge!!! Then I saw the unmistakable white head. It was about 20 feet from me. It was an amazing sight.” The state Department of Environmental Protection 2016 bald eagle nest summary, http://www.conservewildlifenj.org/downloads/cwnj_736.pdf. Bald eagles are “endangered” (in immediate peril) as breeders and “threatened” (could become endangered if conditions persist) as non-breeders. In 1982, there was only one bald eagle nest in New Jersey; Last year, there were about 150.

GROVERS MILL: Does the name of this village in West Windsor, Mercer County, sound familiar. Well, it was the site of the Martian landing in the 1938 radio play adaptation -– by Orson Welles and the Mercury Theatre on the Air — of H.G. Wells’s novel, “The War of the Worlds.” Here is the broadcast that scared the country, https://www.youtube.com/watch?v=Xs0K4ApWl4g. Here is the story of the “panic broadcast,” http://www.smithsonianmag.com/history/infamous-war-worlds-radio-broadcast-was-magnificent-fluke-180955180/. 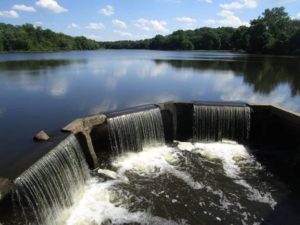 A view of Grovers Mill Pond from the spillway. The Pond is formed by the damming of Bear Brook.

RECORD GARDEN THOUGHTS: As I work the garden, I have thoughts on how I can improve it in 2018. I likely will not simply remember these ideas, so I am writing them down – things such as rotating crops, keeping only a lawnmower’s width between rows, maybe doing less space between plantings, and so on.

“FALL FOLIAGE” IN THE PINE BARRENS: Summer lovers, you probably do not want to hear about colder weather coming. But those of you venturing into the Pine Barrens, start looking for the changing colors of leaves in the swamps – up here in the Pine Barrens around Helmetta, roughly between July 15 and 31; maybe a week or two later in the main Pine Barrens to the south.

SEX!!!: Last week’s photo of the man turtle loving the woman turtle seems to have recharged the batteries of some readers of Garden and Afield. One woman emailed, “Love that perched turtle.” But this is my favorite e-mail exchange:

“It arrives on my desk via studies on sites like the Stafford Business Park, where the native northern pine snakes there were monitored for seven years via radio telemetry,” she continued. “The largest amount of notes was always on how much each individual male scored each season with which female. LOL. Pages and pages and pages of data and photos.”

Uh, she is an environmental scientist who studies herpetological pornography for a living….

CORRECTION/CLARIFICATION: In the 2017, June 4 to 17, issue of Garden and Afield, I referred to a rabbit in the yard. I, likely, had the wrong scientific name. The correct scientific name probably is “Sylvilagus floridanus,” the eastern cottontail. 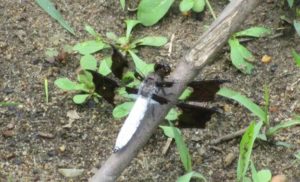 Some kind of dragonfly in the garden.