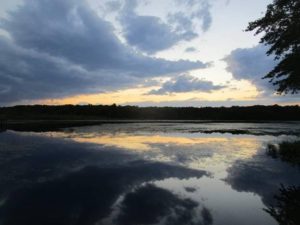 TURTLES: I am still hearing a lot of talk about people coming across turtles, including misidentifying box turtles, “Terrapene carolina Carolina,” as water turtles. While a box turtle will go into water, it is generally a land turtle. So, if it is necessary to move a turtle for its safety, simply move it in the direction it is traveling. In recent days, Garden and Afield reader Bill McGovern came across two box turtles in his yard in Brick, Ocean County, and he reported, “Of course, I didn’t disturb the moment!” But he did supply a photograph of the mating turtles.

Mating box turtles in Bill McGovern’s front yard in Brick, Ocean County. An easy way to identify the gender of box turtles is by their plastrons, or underside. A female’s is flat. A male’s is concave, so he can ride the female in mating, as shown in the photo.

BLUEBERRIES: Sophie Majka, a long-time neighbor of my family in the Pine Barrens around Helmetta, told me a little bit of local lore: Blueberries are ready to pick on St. John’s Day.

Saturday, June 24, was St. John the Baptist Day. So, a few days later, I did a quick check of the woods and found a few berries — actually, probably black huckleberry, “Gaylussacia baccata.” A few ripened blue, most still green. Based on reports I have been seeing from the main Pine Barrens to the south, they have been ripe there for several days. The berries will be around for the upcoming weeks.

Black huckleberry — along with low-shrub blueberries of the genus “Vaccinium” — are found on the uplands as the shrub understory of the forest. In the fall, these low-shrub berry plants are easy to identify because they turn flame red with the changing of “fall foliage” colors.

For those more daring, head to the swamps for taller blueberry bushes of the genus “Vaccinium.”

Just a note: Wild blueberries are not commercially cultivated berries, so they are smaller.

A few years ago, Mrs. Majka and I spent some time up Jamesburg Park, picking the low-shrub blueberries. Mrs. Majka died at 92-years-old in March. This week, in the area where she and I picked, berries were ripening, providing a nice memory of Mrs. Majka. 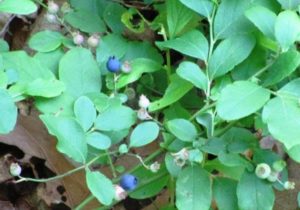 IN THE GARDEN: I am harvesting carrots, but not to the extent I thought I would. Lettuce has taken on a bitter taste, so I stopped harvesting that. Cantaloupe and zinnia plants are flowering. Also watching tomato, cucumber, and sweet corn grow. Aside from harvesting carrots, I am back to the three Ws: Weed, Water, and Wait. 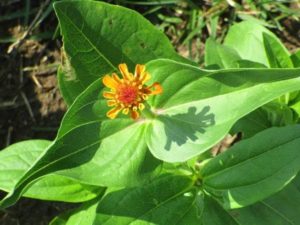 Zinnia, with which I hope to attract pollinators for the food plants, beginning to bloom in the garden.

GARDENING KNOW-HOW: I use various sources to learn about my food gardening: my colleagues at the Rutgers University Cooperative Extension/Middlesex County Master Gardening program, other gardeners, farmers, farm-garden shows and articles. In her column this week in the Philadelphia Inquirer newspaper, Sally McCabe talked about gardening deadlines associated with the Fourth of July, including it being the last time of the season to plant tomatoes. I had already planted tomato by seed and plant, but with the early lettuce done, I had gardening space to spare. After Sally’s column, I happened to be near one of my favorite gardening centers, Tony’s Farm and Garden Center in Windsor, Mercer County. At Tony’s, I picked up 12 plants in six varieties of Chef Jeff’s tomatoes. And following grandson Tony Ciaccio’s advice, I got them in the ground immediately. 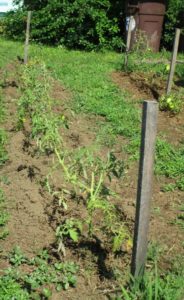 A last planting of tomatoes – various Chef Jeff’s brand – in the garden.

WATERING THE GARDEN: I water the garden daily, giving it a good soaking before 10 a.m. I either use hose-and-sprinkler, tapping house water, or I use a sprinkling can, using mostly rain, recycled cellar dehumidifier water, or recycled water from my sprinkling. When I use the hose-sprinkler system, I aim for 20 minutes; When I use the sprinkling can, I probably would use about 30 gallons to cover my entire garden of approximately 315 row-feet, or about 950 square feet. But, now, I am re-thinking this – Perhaps, I should go to a more soaking sprinkling, but fewer times a week. Thoughts?

AROUND THE YARD: Knock Out roses are starting to bloom for a second time this season. 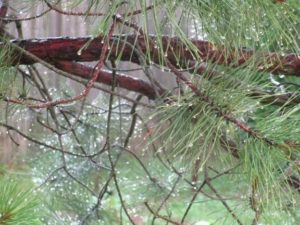 Rain clinging to a pitch pine, “Pinus rigida,” in my backyard.

FEEDING BIRDS IN THE YARD: This summer, I am trying something different – essentially not feeding birds, except with the finch feeder. I am keeping the finch feeder because I love the colorful males of the state bird, the eastern goldfinch, “Spinus tristis.” The idea of not feeding this summer is to let the birds enjoy my yard, with the three birdbaths I keep filled, and help me by eating insects. Birds, nature’s pesticide! Of course, not buying expensive bird seed saves money. However, I still have seed in a garbage pail in the garage. When I am home, I usually have the garage door open and, of course, the squirrels, “Sciurus carolinensis,” have discovered the garbage pail. Clang! That is the sound of the squirrels knocking something down as they open the garbage pail. 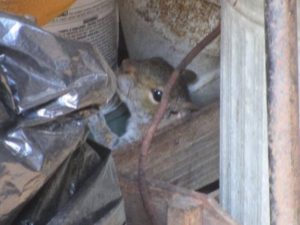 A birdseed thief trying to hide in the garage.

PEDDIE LAKE: Peddie Lake, created by the damming of Rocky Brook, is approximately 15 acres in Hightstown, Mercer County. Rocky Brook is a tributary of the Millstone River, part of the Raritan River-Bay watershed. 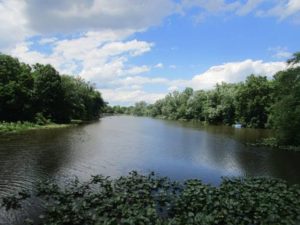 NIGHT SKY: After the Saturday, July 1, storms, the night sky was clear around 10 p.m., offering a southwest view of the half moon, the bright planet Jupiter to the lower right, and the star Spica to the lower left. The moon is waxing to the Full Thunder Moon on the July 8-9, Saturday-Sunday, overnight. Jupiter is the largest of our solar system’s eight confirmed planets. It is in orbit on the other side of Mars from Earth. Earth is in the third orbit, Mars in the fourth, and Jupiter in the fifth. Jupiter ranges 365 million miles to 601 million miles from Earth. Spica is the 16th brightest star seen from Earth. It is 260 light-years away — that is, about 186,000 miles per second over 260 years. 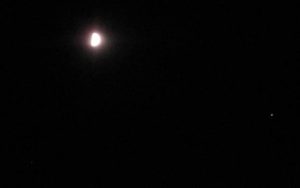 The moon with Jupiter to the right and Spica to the left. 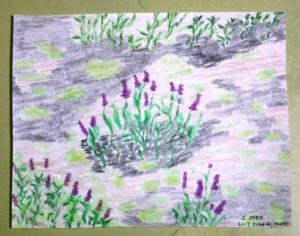 Joe Sapia, 60, is a lifelong Monroe resident. He is a Pine Barrens naturalist and an organic vegetable-fruit gardener.
He gardens the same backyard plot as did his Italian-American father, Joe Sr., and his Polish-immigrant, maternal grandmother, Annie Poznanski Onda. Both are inspirations for his food gardening. Joe is active with the Rutgers University Master Gardeners/Middlesex County program. He draws inspiration on the Pine Barrens around Helmetta from his mother, Sophie Onda Sapia, who lived her whole life in these Pines, and his Grandma Annie.
Joe’s work also is at @JosephSapia on Twitter.com, along with Facebook.com on the Jersey Midlands page.