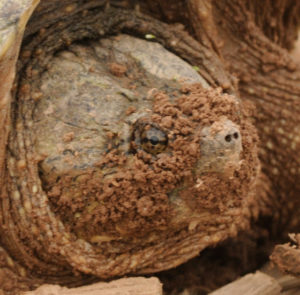 A snapping turtle mom in the process of laying eggs, remains motionless for hours, her body rising up as each egg is laid in the nest. Soil covers her face as a result of excavating a nest hole in which she will lay, according to several sources, 20 to 40 eggs.

I have always been fascinated with turtles, most likely because they were such strange animals, so different from anything else. They wore their skeleton on the outside, so in a way, they never left home even when they traveled. I learned the top shell was a carapace and the lower shell was a called a plastron. For a kid, way back when, to toss those words around, made people take notice and think the kid must be a budding genius. When asked, “what do you want to be when you grow up?” The answer was a quick, “I want to be a herpetologist!”, immediately followed by, “What’s a herpetologist?”.

A small book, A Golden Guide, Reptiles and Amphibians, was my constant companion. I studied the turtle section and noted the distribution of each species as shown in pink on a profile map of the USA. I was used to seeing painted turtles, musk turtles and snapping turtles when I went fishing, and box turtles a-plenty crossing roads on the way to the shore. There was an area in the nearby clay banks where slow flowing streams and spring fed ponds that drained into the river were overrun with spotted turtles. 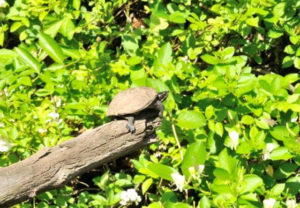 A musk turtle sunning high above the water. Often when canoeing, a large splash of a musk turtle diving off a high branch causes a moment of mystery.

On occasion an uncommon turtle would cross my path. It was these rarely seen animals that really drew me in. There were wood turtles, Muhlenberg/Bog turtles and even a diamondback terrapin caught in a box style crab trap in Raritan Bay. These turtles being royalty; given their limited distribution.

From top to bottom: A terrapin, red slider and eastern box turtles are a few of the turtle species found in NJ. Sliders and map turtles are working their way north via the Delaware Raritan canal.

As I got to know turtles and realized how long they live and how vulnerable they can be, I felt a kinship of sorts and became a guardian of these gentle creatures. When summer is about nigh, especially the first couple weeks of June, turtles are often seen crossing roads to traditional nesting grounds where the female will lay a batch of white leathery eggs in a hole she digs with her hind feet. This is when female turtles are most vulnerable to being crushed on the roadways. I stay alert to avoid adding to the carnage and will help a turtle cross a road in the direction she is headed, when I can safely do so.

Considering some females may not reach maturity for 8 to 10 years, as in the case of the wood turtle, each lost female represents a devastating blow to an already threatened species. 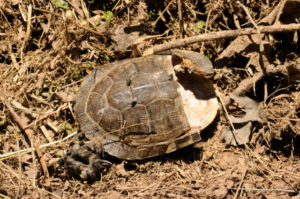 This wood turtle on her way to lay eggs was killed by a mower. Considering she was at least 10 years old the situation is even more tragic.

Turtle nests may be found hundreds of yards from any pond, river or stream. Telltale signs of a nest will be the curled fragments of the white egg cases scattered around a small hole after hatching. Otherwise you will never find a nest unless you see a turtle laying eggs or a nest dug up by a fox.

Scattered scraps of leathery turtle eggs post hatching, are often the only clue of a turtle nest. A typical turtle nest hole. This was made by a wood turtle.

I recently discovered that several map turtles have been using my yard and surrounding properties as a nesting ground. Map turtles were previously only found in southern New Jersey but have moved north primarily via the Delaware Raritan canal to the Millstone and Raritan rivers. These turtles are travelling at least 400 yards uphill through thick grass to dig nests. Imagine the journey the little guys have to survive as they follow their internal GPS back to the river.

A painted turtle (top) and map turtle hatchlings make their way thru heavy grass and brush to the river.

I was fortunate to come across a snapping turtle laying eggs in a recently planted cornfield. The hours long process of laying, covering and paving over the nest by the female was captured on a GoPro camera. It is distilled down to 6 minutes and can be viewed at http://winterbearrising.wordpress.com/

A snapping turtle lays eggs in a corn field. An hours long process where she is vulnerable to predators.

As the incubation period for most turtles can vary greatly, expect a hatch to occur from late August to September. Sometimes the hatch will not occur until the next spring. The cooler the weather during incubation period produces more males and females when weather is warmer. Across turtle species, the females reach productive maturity, in some cases, years after the males.

So be alert for nesting areas and local migrations during the nesting and hatching periods. Your yard could be a turtle nursery and you might not even know it. Be kind to our turtles and honor the legacy handed down from the Unami, a matriarchal branch of the Lenapes, known as the turtle people which inhabited this part of the state.