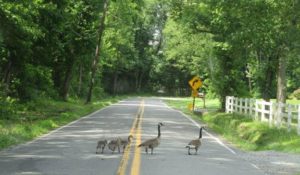 Mama and Papa Canada geese, “Branta canadensis,” and their young cross a road in the Dayton section of South Brunswick, Middlesex County, and stop my Jeep in its tracks. Silly geese! (On a serious note, humans could learn from the dedicated parenting of Canada geese.)

GOOD TO BE BACK HOME: Sorry for missing last week’s “Garden and Afield,” but I was down in New Orleans or traveling to and from. I was attending receptions for a medical residency graduation (of Dr. Anthony M. Sciascia II, the son of my college buddy) and wedding (of Anthony and Nancy). I had a wonderful time with the Sciascia clan who has treated me as family since our Marquette University days that began more than 40 years ago. But I always enjoy getting back home….

SOME N’AWLINS FLAVOR IN THE JERSEY MIDLANDS: New Orleans is known for its coffee made from the roots of chicory, “Cichorium intybus.” Well, guess what has began blooming in the Jersey Midlands? Chicory, the blue flower along roadsides and other disturbed areas. It is a foreign species naturalized here. That is, a weed. But a weed with a nice-looking flower. 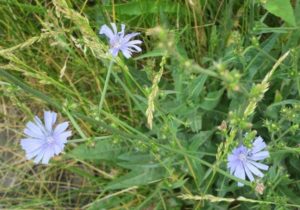 Chicory growing on a Monroe roadside.

IN THE GARDEN: While I was gone, my garden did not get its daily watering, even more critical because we had some very hot temperatures, near 100! But I began harvesting lettuce in earnest.

Lake Valley Seeds’s “Salad Bowl Green Heirloom Lettuce” grows in my garden. Next to the lettuce is nature’s pesticide, a toad — probably an American toad, “Anaxyrus americanus.” (Thanks to Sam Skinner, a Monmouth County Park System naturalist who set me in the right direction on the tentative identification of this toad.)

MY ORGANIC GARDEN: I just mentioned the wild toad as a natural pesticide. But, nowadays, people seem to be touchy over the term “organic,” arguing its meaning or arguing that “organic” does not mean purely natural. As I was taught in journalism, say exactly what you mean, rather than using labels. So, here is how I food garden – I add nothing to the mix except water.

MANALAPAN BROOK: The Brook flows about 400 feet from my front yard, but, thankfully, I am about 150 feet from its floodplain – so, close enough to enjoy the waterway, but far enough away not to be affected by flooding. This time of year, the Brook has a summer feel, with lush vegetation growing in the floodplain and, on this day, bright sunlight creeping through the trees. My section of the Brook is between “Jamesburg Lake” (Lake Manalapan) and “Spotswood Lake” (DeVoe Lake). Its watershed drains 40.7 square miles, according to the United States Geological Survey, in Middlesex and Monmouth Counties. 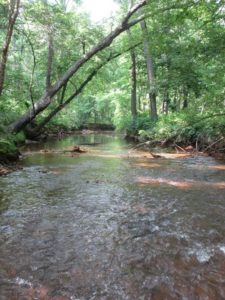 LIGHTNING BUGS: I saw the first lightning bug, a member of the “Lampyridae” insect family, of the season June 4. On June 17, as I was putting together this “Garden and Afield,” I watched fireflies in my backyard. There seemed to be more than normal, maybe a half-dozen to a dozen, but not the numbers I remember when I was a kid. They flash to signal mates.

ELSEWHERE IN THE YARD: Also in the yard over the last two weeks were rabbit, genus “Lepus”; the state bird, the Eastern goldfinch, “Spinus tristis,”; and my friend, the catbird, “Dumetella carolinensis.” The rabbits allow me to get within a few feet of them, probably because I go about my normal business, not TRYING to get close. The male goldfinch is brightly colored, a beautiful bird – “wild canaries” in the yard. I love catbirds. When I work in the yard or hike the Pine Barrens around Helmetta, catbirds perch nearby and keep me company. 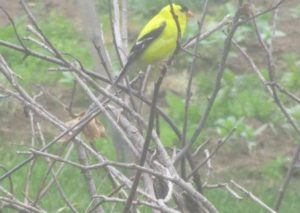 An Eastern goldfinch. Brightly colored, so it is a male.

WHITE ORCHID: Faye Bray, a friend from the Outdoor Club of South Jersey, reported a rare white variety of the pink lady-slipper orchid, “Cypripedium acaule,” in the Whitesbog, Burlington County, area of the Pine Barrens. “It’s freaking remarkable,” Faye said. (Unfortunately, we could not get a photograph for “Garden and Afield.”)

TURTLES: Turtles have been laying eggs, meaning females have been moving around. On my trip to and from New Orleans, I saw a half-dozen or so dead along the Interstate highways, apparently struck by vehicles. Up here in the Midlands, I have heard of various encounters with turtles. One, a person moved a box turtle, “Terrapene carolina,” to water. Wait, a box turtle is a land animal. Two, another person moved a snapping turtle, “Chelydra serpentina,” to a pond, possibly interrupting its egg-laying. So, my advice is, unless there is a compelling reason, leave wildlife alone. Generally, it knows what it is doing, it does not need humans to mess up its life.

TICKS: Ticks are bad this year. Essentially, they cling to vegetation and wait for a mammal to brush by them, then they attach. We have three ticks locally: deer tick, “Ixodes scapularis”; lone star tick, “Amblyomma americanum,” The female is easily distnguishable by the light-colored dot on her back; wood tick, also known as the dog tick, “Dermacentor variabilis.”

Get a tick ID pocket card. It will show the size and colors of not only these ticks, but in different stages of development. See http://www.tickencounter.org/tick_identification/guide.

There is no need to panic. Tick-borne diseases are relatively rare — I mean, if everyone in range of a tick, or even bitten by a tick, were to get sick, there would be a very sick population. However, be vigilant. In the yard, keep grass trimmed. If in the woods, take precautions by dressing properly. (If I am wearing long pants, for example, I tuck them in my socks.) And check for ticks on one’s body. When coming in from the woods or other places ticks are likely, wash the clothes and bathe as soon as possible.

If a tick is crawling on oneself, simply flick it off — It may take a few tries. If one is attached, take tweezers and grab it behind the head and pull it out. Then flush it down the toilet, throw it in a fire, or, if needed for observation, put it with an alcohol-doused cotton swab in a closed container.

If bitten, observe the bite for abnormalities, such as the Lyme Disease bull’s eye, seek medical help if concerned. The big tick disease locally is Lyme. However, New Jersey is now watching for Powassan virus.

My yard is wildlife-friendly and I take no special precautions in the yard, other than observing my clothes and body. I am always in the woods and fields, I found one tick on my body this season, but 10x or 20x that on my clothes — the point being, notice them before they get on one’s body.

Regarding the yard, keep the grass cut. I have tall-grass wildlife patches in my yard and have not found a tick on me yet while doing yardwork, etc. I would be more concerned with cats and dogs bringing them inside.
If you look them up online, use the scientific name, so as not to confuse species and colloquial names.

LETHAL ANIMALS: I would say on a daily basis, the three most lethal animals in the Pine Barens around Helmetta are the tick, mosquito, and pet dog. The former two could do a number for life, while the latter one could be hurtful for the moment.

In the Piedmont region of the Jersey Midlands, I would add copperhead snake, “Agkistrodon contortrix.” In the main Pine Barrens, the rattlesnake, “Croatus horridus.” But the chances of getting bit by either is rare.
Throughout the Midlands, a wandering black bear, “Ursus americanus,” could be a threat – but unlikely. If you see one, stay clear and that should be enough.

YOU SAY “MUSKMELON,” I SAY “MUSHMELON”: My friend Virginia Lamb, who I have turned to for advice (environmental, gardening, and general) over the years, said in reference to my using “mushmelon,” “It’s ‘muskmelon, not ‘mushmelon.’” She is correct, in a more formal sense. But I am correct, too, in a more informal way. So, I responded in an e-mail, “Local colloquialism = mushmelon. I use that only in my blog. Normally, when I talk, I say cantaloupe. (Kind of like the colloquialism “garden snake” for “garter snake.)” Yes, we are all talking cantaloupe. 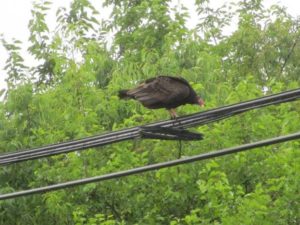 A turkey vulture, “Cathartes aura,” sits on a roadside utility line in Monroe after I spooked it when it was eating a dead ground hog, “Marmota monax.” Here, it is easily identified by its red head. Turkey vultures are commonly seen, soaring in a circle, their wings tipped into a V.

DATE TO KEEP IN MIND, JUNE 24: St. John the Baptist Day. Sophie Majka, a neighbor who died March 8 at 92-years-old, had told me blueberries are ready to pick in the Pine Barrens around Helmetta on St. John’s Day, June 24. So, that is a target I look to.

SOURCES: As you can see, I have already mentioned various sources of information. Additionally, I enjoy listening to Mike McGrath’s “You Bet Your Garden” radio show on WHYY, 90.9 FM, out of Philadelphia – or on the Internet at http://whyy.org/cms/youbetyourgarden/. I also read Sally McCabe’s “In the Garden, It’s Time To…” column in the Philadelphia Inquirer newspaper, or on the Internet at philly.com.

MORE N’AWLINS FLAVOR IN HELMETTA: Why do I love traveling in the South? Maybe because I am a boy of the South – South Middlesex County. And my local roots go back to Helmetta, whose founder, for lack of a better term, George Washington Helme, was a Confederate military officer. Although a native of Kingston, Pennsylvania, Helme was a New Orleans resident during the Civil War. After the war, he came up to Helmetta, where his wife’s, Margaret Appleby Helme’s, family had a snuff mill operation – one that George would eventually take over. The George W. Helme Snuff Mill provided my family with work for approximately 75 years, from circa 1900 to 1976. The mill stopped manufacturing snuff in 1993 and, now, it is being converted into housing. 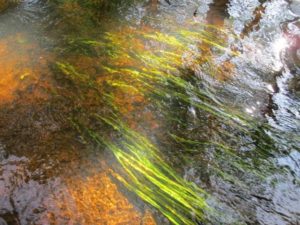 Looking into sunlit Manalapan Brook, here between Helmetta and Jamesburg.